The football season is over, my NCAA bracket was annihilated two weeks ago, opening day isn't until next week, Georgia's spring game isn't until a little after that. Basically, I'm in kind of a tough spot when it comes to anything blogworthy in my little sports universe, so when Joey from Schembechler Hall was kind enough to post a group of roundtable-y questions concerning the upcoming college football season (which, yes, is still 156 days away, not that I've been counting), I let loose with a Homer Simpson-esque "Woohoo" and got to it. (I may have also sung Homer's "Max Power" song a couple times, but that's neither here nor there.)

Anyway, here are the questions and answers:

1. It's early, but thus far, which offseason change or changes in college football are you most excited about?

Well, this sure won't come as a surprise to anybody, but firstly I'll be excited about not having to hear Southern California celebrated as the Greatest Team In The History Of Ever by ESPN for five more months. Nothing against the Trojans, you understand, but c'mon, people. That's the kind of nonstop fawning you rarely see outside of a Dick Cheney interview on Fox.

But secondly, I'll be excited to see how the races in recently shaken-up conferences like the ACC, the Big East, and Conference USA turn out. Last year was these conferences' first season of "full reconstitution," if you will, so while that made for some interesting games, it was still kind of hard to make any major judgments about where these new conferences were headed based on just one season of play. I think things will be a lot clearer in 2006, with certain questions coming a lot closer to being answered: Could the ACC's reformation have put the nail in the coffin of FSU's claim to be a national power? Is West Virginia really going to be the Big East's new long-term powerhouse, or is Louisville going to get up off their asses and claim that title like everyone thought they were going to do last year? And is anyone in C-USA going to step up to take a place alongside TCU, Boise State, etc. as a legitimate mid-major contender? (My preliminary answers: Still not quite yet, probably, and probably not, respectively, though there's still plenty of time for me to change my mind.)

As for individual teams not named Georgia, one of the biggest developments I'll be looking forward to is seeing whether Papa Weis can perform as excellently in his second year at Notre Dame as he did in his first. Yes, he won nine games in his first season, but Ty Willingham won ten, and . . . well, nobody in South Bend appears to be exactly weeping in their Communion wine that he's gone. But if Weis's record drops off as precipitously as Willingham's (total wins slashed in half from '02 to '03), there's going to be a nasty sense of deja vu to the proceedings. I don't think this is going to happen, nor do I hope that it does, but . . . well, we'll just have to see. 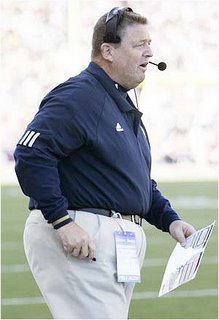 He'll still be sleeping on a pile of money with many beautiful ladies regardless, but will Papa Weis be staying home for New Year's?

2. With spring practice underway, what are the three concerns about your team that are causing you the most anxiety?

The quarterback situation is a concern, obviously, but not the biggest one -- David Greene was brand-new when he took his first snaps for the Dawgs in 2001, you'll recall, and he turned out all right. The QB race is convoluted, but there are enough guys in it I'm confident somebody will step up; I'd put that concern probably second to our run defense. In case you weren't watching, the middle of our defense, which had been so strong through the first half of the season, turned into a pumpkin round about the Vanderbilt game, and while it was mainly due to injuries at that point, things didn't improve a whole heck of a lot even once the injuries healed -- culminating in a truly jaw-droppingly awful performance against West Virginia in the Sugar Bowl. Everyone will come back healthy, I'm (tentatively) assuming, but depth is going to be a concern. Certainly no less so with Tennessee, Auburn, and Florida all poised to field strong running games in '06.

Number-three concern is simple leadership. This was a big issue going into '05, too, one that, in retrospect, probably needn't have been: Yes, Shockley was entering his first year as the anointed starter and everyone was wondering whether he could achieve the leadership bar set by David Greene, but Shockley was a senior who'd accrued considerable playing time for someone who'd never been the starter, and the rest of the team knew him well enough to like and respect him. None of the guys currently in the running for our QB position have all those luxuries. Tereshinski is a senior, but has nowhere near the playing time Shock had; Matt Stafford, while supposedly an incredible talent, has never taken a snap for the Dawgs.

Of course, there's nothing saying that the heart-and-soul-of-the-team responsibility necessarily has to fall to a QB at all. As someone who passed up what would've almost certainly been some very delicious NFL money to to come back and wear the red and black for one more year, Quentin Moses, certainly, seems up to the task. I'd also hope to see some big things from Kregg Lumpkin, who's kind of the "elder statesman" of a very stout RB corps that's going to include Thomas Brown, Danny Ware, and new recruit Knowshon Moreno. Because of the injury that took him out for all of 2004 and the subsequent rise of Brown and Ware, people forget just how highly Lumpkin was touted as a recruit in 2003; I wouldn't be surprised to see him make this his breakout, silence-the-doubters season in much the same way that Shockley did in 2006. It all depends on whether Richt and the coaching staff gives him that chance. 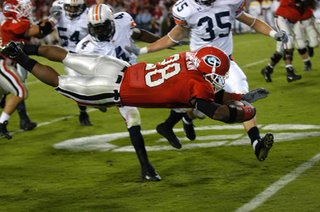 3. Care to take a stab at a preseason top five?

Of course, because if there's anything this blog should have proven beyond a reasonable doubt, it's that I'm not afraid to say stuff that may make me look like a total ass later on.

1. LSU -- For a guy enduring his first year in the mosh pit full of serial killers that is the SEC, not to mention enduring the bizarre circumstances of Hurricane Katrina for the first couple months of the season, Les Miles acquitted himself pretty well in 2005 racking up 11 wins. Like many others, I'm still not convinced that he's the second coming of Knute Rockne, or even Nick Saban, but 2006 sets up as a great situation for him to prove us all wrong.

2. Ohio State -- In between blog posts, Cheatypants McSweatervest Tressel is going to have to fill some big holes on defense, but that's hardly been a problem for him before.

3. Texas -- I have a sneaking suspicion that Vince Young's departure is going to be a much bigger loss for the defending national champions than anyone has predicted so far, but then again, maybe beating Oklahoma and winning the national title has finally gotten the "can't win the big ones" monkey off Mack Brown's back for good. We'll see.

4. Oklahoma -- Haven't seen the Sooners on many other early top-fives, which I think is an oversight. Yeah, they stunk the first half of the season, but came on very strong in the second half, and Bob Stoops is a guy who's never going to be kept down for very long.

5. Florida -- Orson, Stranko, this leap of faith is all for you, guys. The Gator offense almost has to be better in '06 than it was in '05 -- it could hardly be any worse -- but Chris Leak still isn't the quarterback Urban Meyer would ideally like to run his system and the whole world pretty much knows it. Given Gators, will Meyer make Gator-ade (made that up myself just now! totally!), or will Leak once again be hung out as chum for opposing DEs? 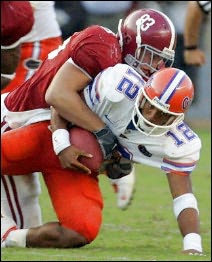 Sorry, Orson, but the price you pay for making it into my top five is another Vietnam flashback of the Alabama game.

By the way, we haven't been talking much about it lately but the big G-Day tailgate bloggerpalooza is still on like Donkey Kong -- April 8, 9:00ish, somewhere on the north campus quad in idyllic Athens, Georgia. Stay posted to this site or Dawgsports.com for further updates over the next week or so.
Posted by Astronaut Mike Dexter at 9:25 PM

I think the creation of the divisions in the ACC was purposely created to nearly ensure FSU a place in the ACC title game every year, what with putting Miami and VTech in the opposite division. With the possible exception of Boston College, who in the Atlantic division is gonna compete with the 'Noles, year in and year out? I won't find it surprising to find many years similiar to this one-- i.e, the 'Noles wrap up a spot in the ACC title game sometime before Halloween. Does this necessarily ensure that they're going to remain a national power? Obciously not. But if you can reasonably expect to at least get to your conference championship game every year and then manage to pull out your fair share of W's (like this year) and go to a BCS bowl, I'd say that your status as a national power is not gonna be in much doubt. And as a 'Noles fan, none of this bothers me.

College football is proof that Marx was wrong, clearly it is the opium of the masses.

in case you don't see this over at ACG's place:

it's a pretty harsh insult, as far as curses go, esp. coming from a woman (blah blah women are expected to be ladylike blah blah cultural differences blah blah fishcakes). pinchar isn't tossed around like fuck is, as far as my experience goes, though my experience is limited to Dominicans, Puerto Ricans, Ecuadorans, Mexicans, and Cubans living in the U.S. (and mostly NY & Miami at that). Might be different when you go to Spanish-speaking countries.

"Fuck you, asshole" or simply "fucking asshole," depending on the context. Valdes-Rodriguez also recommends the more succinct pendejo.