The weekend in pictures, part I: airplanes.

My apologies if I sort of bummed everybody out with the last post. It wasn't my intention to do so -- well, no, it kind of was. But I thought I might post something a little less dispiriting by throwing up some pictures I took over the weekend while I was in Columbus. I now have a 128-meg memory card for my little digital camera, so I decided it was time to let that sucker rip.

First set is from the air show I went to with my dad. "Thunder in the Valley" has actually gotten to be a pretty big deal around these parts -- it isn't Paris or Farnborough, needless to say, but it does draw a pretty big crowd each year, and they manage to take advantage of their proximity to Fort Benning to bring in some pretty neat military aircraft, among other things. I know I've ragged on Columbus at numerous points in the past, but I really do think that if they expanded and publicized this air show thing a little more, they could turn it into a nationwide deal. My sister and I have talked at length about how Columbus really needs something that Atlanta doesn't have to sort of distinguish itself and move itself out of Atlanta's shadow -- well, I think the air show could be the ticket, if they did it right. 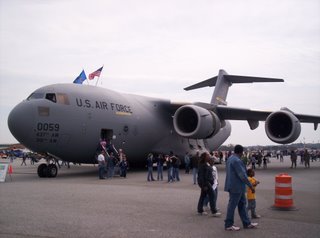 The undisputed star of the show, and a new addition this year, was the C-17 Globemaster III, the newest heavy-lift cargo plane in the Air Force fleet. I think the guy told us that, fully loaded, it weighs something like 580,000 pounds, yet it can take off in only 1,300 feet -- less than 1/5th the length of the Columbus airport's main runway. Which ain't all that long, considering that we only get ASA commuter flights in there anymore these days. 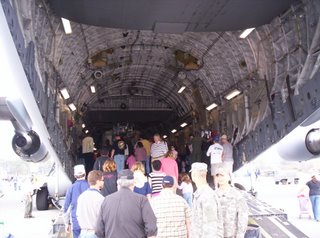 A bunch of folks strolling up into the cargo hold of the C-17, which is big enough to hold a CH-47 Chinook helicopter or an M1A1 Abrams battle tank, among other things. 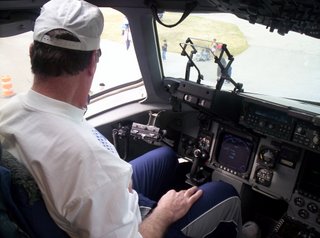 Pops behind the wheel of the C-17, about 20 feet off the ground. Dad is a funny guy: When I first asked him if he wanted to go to the air show, he was like, "Ahhhh, I don't know, it's usually kind of the same every year" -- but once we got up in the C-17, he was as excited as a kid, and actually elbowed three or four little kids out of the way so that he could sit in the pilot's seat. (Of course I'm only kidding here. It was only one kid, and he shouldn't have been looking at Dad like that.) 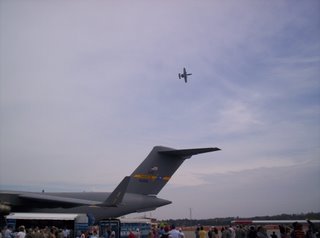 Here's an A-10 Thunderbolt II coming around to do another demonstration of a tank-killing strafing run. The A-10 is basically an airplane built around a cannon, one that fires Coke-bottle-sized bullets that aren't so much "armor-piercing" as "armor-liquefying." I think if I'd followed through on my childhood dream of becoming a pilot in the military, I'd want to fly one of these -- slow, butt-ugly, and downright terrifying. Kind of like me, except for that last part. 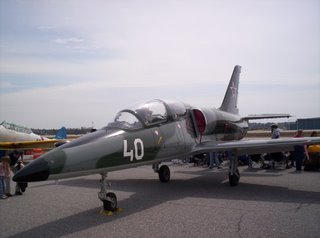 An Aero L-39 jet trainer, here in Red Air Force markings even though it was built by my countrymen in (w00t) Czechoslovakia. (You can purchase a flight in one of these if you're so inclined -- or if, like GM chairman Robert Lutz, you have an extra $200,000 lying around, you can buy the plane itself.) 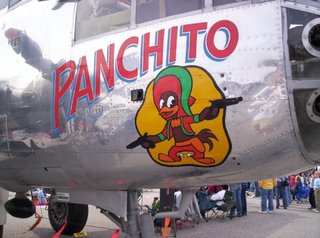 Detail of the nose art on a B-25 Mitchell from WWII. 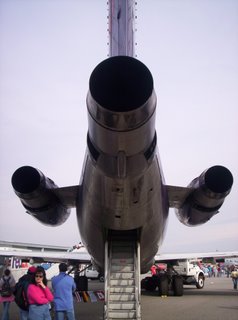 Business end of a FedEx Boeing 727. 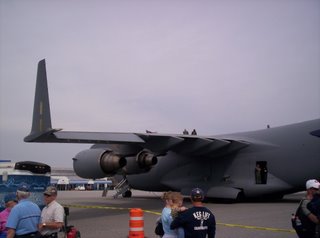 Two airmen watching the show from the roof of the C-17, one of the better seats in the house.