More momentous than even the air show was the fact that my folks brought to an end two years of canine-less living by going out and getting a dog from the Humane Society. 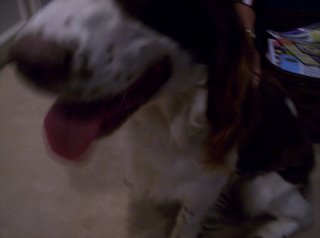 This is that dog, a two-year-old springer spaniel who now goes by Jake. It was sort of difficult getting him to hold still at first . . . 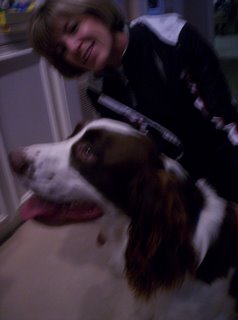 OK, this is a little better, I guess -- here's Jake with my mom. I think what sealed the deal was the striking resemblance Jake bears to the two Brittanys they used to have, not to mention the very similar personality. 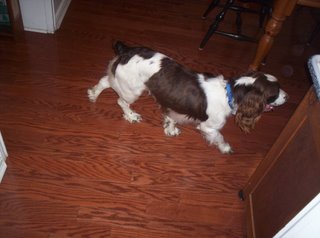 Jake takes a brief opportunity to explore the house before . . . 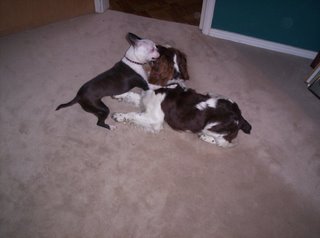 . . . we inevitably get to the part where Jenna decides to annoy the crap out of him. Here it looks like she's going after one of his ears, which was pretty much her M.O. for the weekend; even as we were throwing tennis balls in the backyard for Jake to go catch, Jenna would be running right alongside him, trying to clamp her jaws around one of his ears as it flapped joyously in the breeze. 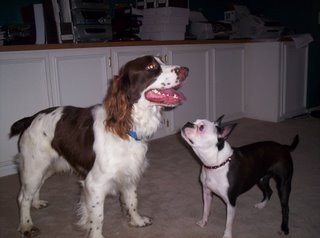 Jake and Jenna in a rare calm moment of not being total spazzes. I have it on good authority that the following Monday, when Jenna and I were back in Birmingham, both dogs were moping around all depressed with nobody to play with. Awwww!

OK, that's enough before I go into diabetic shock from all the sugar. Tomorrow: the exciting world of home improvement.
Posted by Astronaut Mike Dexter at 8:51 PM


Kudos for adopting from the humane society. I got both my main and my emergency back up dog from the local shelter. A more loyal friend you may never find.

I just got back from moving Mike back from OSU, and managed to escape without killing one the other inhabitants of his hellhole - they had adopted a little pitbull (mistreated little brindle beauty) and were getting ready to take her back to the pound now that they were going back home for their real life. Apparently this is not an untypical college thing, abandoning animals when having to go home? I was horror-struck, and just wish we had room in our three-dog house for one more little girl...sigh Thank goodness for those who permanently rescue dogs, officially or unofficially. Thanks Mom and Dad!