Ladies, the fake line forms to the left. 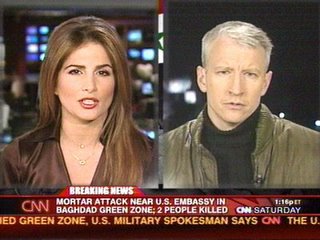 You left "Anderson Cooper 360" for Fox? Apparently The Clash was wrong, and Rudi can, in fact, fail.

Two things came up over the past month that have kind of altered the way I function in terms of TV news viewing. The first involves Rudi Bakhtiar, whose eye-popping make-you-wanna-throw-rocks-at-Laurie-Dhue hotness has been well documented at this and previous blogs; mere days after noticing I hadn't seen her on CNN or Headline News in what seemed like ages, I'm flipping through channels on a Sunday morning and I catch a glimpse of a strikingly Rudi-Bakhtiar-esque woman up at channel 53 . . . otherwise known as Fox News. With a feeling of dread rising in my stomach, I flipped back, and there she was. A quick Internet perusal confirmed that Rudi had found a new home at Faux.

I have to give props to the enemy for a genius move on their part, as I can only assume this was the opening salvo in a diabolically Blofeld-like scheme to consolidate as much of the nation's newsreading hotness as possible in one network. If that turns out to be true, then watch out, Betty Nguyen and Robin Meade, y'all are probably next on Faux's hit list. That said, however, I'm obviously not crazy about Rudi's choice. Granted, the idea of Rudi Bakhtiar being employed by a company called Fox is somehow appropriate, yet I still can't help but feel betrayed in the same way I would if, say, Monica Pang announced an intention to go to grad school at Florida. Sure, everything seems hunky-dory now, but how long before they start forcing Rudi to accompany douchenozzle John "Senator Kelly" Gibson to his John Birch Society meetings? Will we soon see leaked photos of Bakhtiar standing over the nude, hooded body of Alan Colmes with a cigarette hanging from her insouciantly smiling lips?

The whole thing did jog my memory, though, of a post I'd seen on TBogg earlier in the month and had intended to comment on (but in my post-Sugar-Bowl state of anguish and malaise I failed to do so). TBogg's post was about Melissa Theuriau, a French newsanchor who's just, like . . . well, see for yourself: 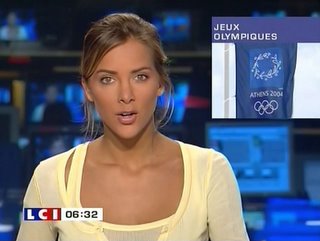 In France she is called "la renarde," and she is hunted with only her cunning to protect her. (By the way, did you ever find Bugs Bunny attractive when he put on a dress and played girl bunny? Neither did I. I was just asking.)

See what I'm saying? I mean, I've expounded at length upon the astronomical caliber of female splendor at UGA, but even there we didn't have any girls like this. And you would've known if we did, because the downtown bar scene would've suddenly dried up due to entire sororities saying "Why bother" and spending their Saturday nights at home with a pint of Cherry Garcia and the VHS of "Titanic."

So. Anyway, like I said, I'm kind of re-evaluating my worldview here. Maybe Rudi Bakhtiar doesn't have what it takes to be my fake girlfriend after all, but clearly Melissa Theuriau does. What to do, what to do? I know -- I'll let you, the reader, decide! Yes, you, the reader, get to help pick my fake girlfriend, the one I trot out anytime I want to comment on some grand claim made by George W. Bush that he has nothing to back himself up on, or, hell, when my regular day-to-day drudgery gets too boring to post on and I simply want to trot out my richly embellished fantasy life.

Mind you, that won't be easy, given that I also have connections to scads of other ladies in my fallacious fantasy past. So here's a quick rundown of all the options on your ballot, just so that you're in a position to make the most informed possible choice: 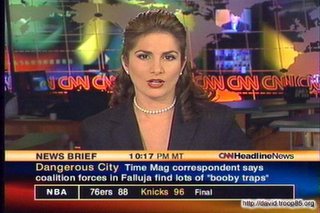 Rudi "The Subcontinental Siren" Bakhtiar
PROS:
· Is a journalist, so we got that in common.
· I'm assuming Fox News was willing to drop a boatload of money to bogart her from CNN.
CONS:
· Paychecks now signed by Rupert Murdoch.
· Iranian background means she's probably been on the government's terrorist watch list for months.
· Is a journalist. 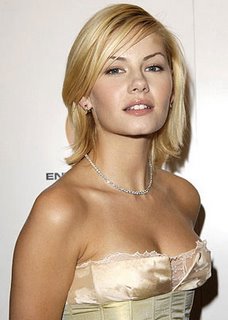 Elisha "Kim Bauer" Cuthbert
PROS:
· Apparently is a sports fan.
· Canadian, which I can use if we ever go on vacation in Europe, or anywhere else in the world, for that matter.
· Was in "Old School."
CONS:
· No confirmed interest in anything football-related -- only hockey, which I can't get excited about unless it's the Thrashers or the Canadiens.
· Unable to guarantee I wouldn't start giggling if she let slip an "eh" or an "aboot."
· Sometimes tends toward belts that verge on the gratuitously large.
· Was in "House of Wax." 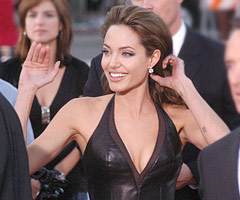 Angelina "Homewrecker" Jolie
PROS:
· The vinyl bustier scene from "Mr. and Mrs. Smith." Seriously, dude.
· "You know, we have the same birthday" a take-it-to-the-bank pickup line.
· Is an international humanitarian.
· Evidently likes kids.
CONS:
· Dating her would involve breaking up a family, and I don't do that anymore.
· The whole wearing-a-vial-of-Billy-Bob-Thornton's-blood-around-her-neck thing. Sorry, but you're probably going to have to adopt a few more Third World children before you can take that one off your permanent record.
· Doesn't exactly have a reputation for normal relationships. 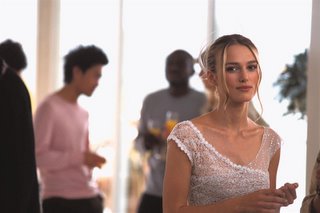 Keira "Domino" Knightley
PROS:
· British accents are teh hott. (Make that an Oscar-nominated British accent.)
· Has abs like whoa.
· Actually picks mostly good movies to appear in.
CONS:
· Because she's a Brit, I'd probably have to do everything in reverse if I wanted to make a move on her in the front seat of a car. (See also: the "Seinfeld" episode where George "can't go left.")
· Can't legally drink -- in the U.S., at least -- for another two months. 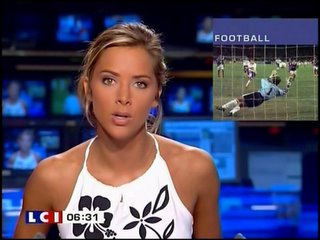 Melissa "Frenchy" Theuriau
PROS:
· French accents are also teh hott.
· Being from France means there's an 83%-88% chance she's Catholic.
· Predilection for wearing tank tops and flirty sundresses while reporting on suicide bombings or avian flu makes her quite an innovator, at least by American standards.
· Might actually be impressed with the Serge Gainsbourg, Air, and/or Édith Piaf in my music collection. (Which would make her the first.)
CONS:
· The language barrier, given that 90% of the French words I know are obscenities.
· French nationality probably means she, too, is on the terrorist watch list.
· For similar reasons, being romantically linked to a non-Coalition foreigner probably deep-sixes any chance I'll ever have of getting elected to public office in the state of Alabama. (Just look what it did to John Kerry.)
· Is a journalist.

So there you have it -- cast your vote or make write-in recommendations in the comments thread. (You're also welcome to make recommendations for a real girlfriend, too, which might even be better, now that I think about it -- but shit, I'll take what I can get.)
Posted by Astronaut Mike Dexter at 7:34 PM

Pros:
1. She is beautiful beyond belief.
2. I think she's Catholic.
3. She's only 37, so she's biologically capable of whelping your degenerate spawn.
4. You probably get a good deal on T-Mobile cellphone service.
5. She'd love to bond with your sister at fashion shows and they can both call it work.

Cons:
1. She is married, but she'll get tired of Mike soon or he'll kick the bucket soon. He hasn't looked so good lately.
2. The whole British thing you mentioned.
3. She could be dumb as a stone for all I know. All of my imaginary conversations with her end with "Hey Asshole! Eyes up here."

That French lady is smoking.... my word. I didn't think anyone could take my vote away from CuthBEST, but hot damn....

It's Angelina and it's not even close to not being Angelina.

No contest. Game over. Period, paragraph, end of story.

I have noted elsewhere that, by a certain point in his life, a man either prefers nice girls or he prefers bad girls.

Still, a general preference isn't an ironclad and inviolate principle. A guy can prefer nice girls yet still, on occasion, have himself a hankering for some bad girl.

For instance, there's Eliza Dushku in "Bring It On" . . . there's Elizabeth Hurley in "Bedazzled" . . . and there's Angelina Jolie in, like, every single thing she's ever done, both on film and in real life.

So, yeah, it's Angelina and it really isn't much of a ball game.

While I second the write-in vote of Catherine Zeta-Jones (add the accent to the pros list), Angelina is the only truly correct choice. Except - she's mine!

I really have to go with Melissa Theuriau, despite the NSA's evesdropping on your surely stilted, but nonetheless-steamy transatlantic phone sex.
I mean, really, doesn't a fantasy girlfriend require some great fabricated storyline about why she can't be nearby? It's like the dorky middle-schooler's girlfriend who only seems to appear when he goes on vacation. And...look at her!

Good Lord, that French lady is beautiful. Her nose is so sharp, too.

But, to me, your heart belongs to Elisha Cuthbert, so my loyalty lies with her. I mean, "The Girl Next Door" was, sure, a "Risky Business" ripoff, but the girl was amazing.

And I think Angelina would scare you with knives or something, should she ever get the opportunity.

Zeta-Jones is Welsh. Which means she'll probably die an alcoholic.

My vote is for Angie, too.

Another pro (which could also be a con) for Angelina: most straight chicks would go lesbian for her. And, last I checked, straight guys like hot lesbian sex.

I think you've got a winner.

Linked to this today. Hey Birmingham, why am I not on yer blogroll, huh?