Take it from someone who's been there -- it's a long flight back from Seattle. 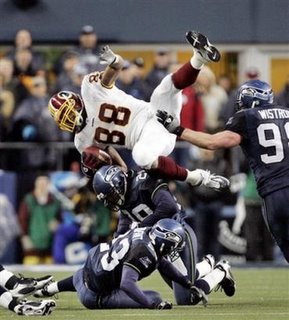 Them feets work better if you got 'em on the ground, cousin.

I've been spending the weekend up in Maryland with my best friend from college, who moved here a few months ago, and being up here on the weekend that the Redskins play their first divisional playoff game in 6 years, and only their second in 15 years, is kind of like when I leave Birmingham to go back to Georgia to see my folks for the weekend or something: I smile knowing these are my people. In Georgia it's people with Georgia front license plates and Bulldog stickers on their cars, here it's people with Redskins flags flying from their car windows. On a Friday afternoon, as they drive home from work. It's walking into a bar on Saturday afternoon and realizing that the #56 Lavar Arrington jersey the little blond hostess is wearing just makes her hotter. Somehow it's fitting that after the Redskins' long 15-year trip through the desert, I'd end up watch them finish the trip up here.

Yeah, they lost. Lost despite a +3 turnover margin and rolling up more than twice as many yards as they did the previous week when they somehow won. And look, I thought I wouldn't have to worry about Florida receivers repeatedly ripping my heart out of my chest once the college season was over. But whereas a Georgia loss leaves me with a sick feeling in my stomach and usually drives me to confession the following Wednesday evening, feeling certain that I must have really done something to piss God off if he's gonna do me like that, this latest Redskins loss leaves me disappointed but upbeat, because for the first time in 15 years there's light at the end of the tunnel for us 'Skins fans that finally isn't an oncoming train. Clearly, the team is not perfect, as anyone will attest who saw them set offensive football back 20 or 30 years in the win against Tampa a week ago, but we've finally ginned up another playoff run and we've finally gotten the Cowboys monkey emphatically off our backs, and I'll take that in a heartbeat.

Anyway. Annapolis, for y'all who have never been here before, is a pretty cool little town. And the U.S. Naval Academy, for lack of a better word, is badass. As we were walking around the campus on the guided tour yesterday, I got to daydreaming -- you know, everyone has these daydream threads or storylines where they imagine what their lives would be like right now if they'd done X, Y, or Z when they were younger; mine include Where would I be if I'd learned how to play football when I was a kid and gone on to star in college?, Where would I be if I'd started a band with my friends when I was in high school?, etc. etc., that kind of thing. Anyway, to that list I added, Where would I be if I had gone to the Naval Academy and ended up graduating with honors? I can't say for sure, and I don't know that I would've even made it through, given that four years at the Academy requires a level of physical exertion I'm not sure I could've withstood when I was 18 or 19, much less now. But when they show you the promotional, video of all the graduates on commissioning day in their dress whites throwing their caps up into the air -- and I'm sure this is exactly what they were going for when they filmed that -- you can't help but try and picture yourself among them. And I, for one, couldn't help picturing my dad up in the stands, almost wetting himself with pride. Depending on what your kid does and where he/she ends up, some folks are going to be impressed by it and some folks aren't, but saying "My kid just graduated from the Naval Academy" tends to shift that balance to about 90/10.

Anyway, this afternoon it's hop on a train at Union Station and ride on down to Fredericksburg, Virginia, to meet up with some relatives who may or may not have power after the storms last night. Why is it that every time I take a trip up North these days, it snows? Do I have some shamanic snow-creating powers that follow me whenever I travel north of the Mason-Dixon? That might actually be more impressive than being accepted to the Naval Academy, now that I think about it. Well, not really.
Posted by Astronaut Mike Dexter at 8:31 AM

Yeah, I can't figure out why Coach Gibbs decided to keep the Skins out of the superbowl this year, he must have seen some reason to though. I will bow to his greater wisdom in both football and NASCAR though, his mysterious ways are not for guys like me to understand.

Glad you enjoyed my home town. The Academy is a special place. Watching the Middies walking around town during the summer or even at the mall on weekends reminds you that we have some special young people in this country.

Now for an asshole geography correction. Maryland's northern border is the Mason-Dixon, so unless you traveled to parts north of MD, you never crossed it.

"And look, I thought I wouldn't have to worry about Florida receivers repeatedly ripping my heart out of my chest once the college season was over."

Well, if you lay down with dogs...

"Dog" is definitely the operative word there. Jacobs is basically a lingering reminder of Spurrier's orgiastic spree of signing ex-Gators for the two miserable seasons he was coach, and believe me, nobody in D.C. is happy with what they've gotten out of Jacobs this year (or what they got out of Spurrier, for that matter). Personally I'm hoping the 'Skins make a run at either Antwaan Randle-El or Reggie Wayne in the off-season.

...you come visit the DC/MD/VA area, and you look up your relatives in Fredericksburg? What about those other 'Skins freaks-kin who live a lot closer to Union Station?! Would have loved to say "hey", and would even have forgone going out to WVA to keep your g-grandfather company through the agony of defeat!