Well, it's a new year, and two things the other day brought back a bunch of memories of what I was doing three years ago right around this time. The first was this post by official HJS homey Josh, concerning the Draconian anti-tit-flashing policies in place for the Sugar Bowl parade, now that said parade is taking place in Atlanta; the second was an e-mail from homey Darren, whom I've seen only once since we trucked on down for the last Sugar that Georgia played in, the one following the historic SEC-title season of '02.

Ordinarily, hopping in the car and road-tripping down to N.O. for a game wouldn't have been all that big a deal, but this one was a little different. Darren was in Atlanta, assigned to cover the Peach Bowl for the newspaper he works for, and the Peach didn't start until 7:30 p.m. So our plan was that he would cover the bowl game, I would ring in the New Year with some mutual friends of ours in East Atlanta, and then we would meet up at the Krispy Kreme on Ponce and drive all night down to New Orleans. We ended up finally meeting up at Krispy Kreme about one o'clock, and . . . the journey began.

The outcome of the Peach Bowl, which involved Tennessee getting an Ike-Turner-caliber beatdown from Maryland, I mention only because it was a nice dose of karmic come-uppance both for Casey Clausen, perhaps the biggest asscrack to have ever taken a snap for an SEC team, and for Jabari "Talkin' 'Bout the Rose Bowl" Davis. But despite getting a front-row seat from which to witness the richly satisfying donkeypunching of the Vols, Darren, a fellow UGA grad, was in a foul mood when we met up at the Kreme. Not because of the outcome of the game, obviously, but because he'd spent all that time covering a completely half-assed, disinterested performance by the Vols when he could've been partying like a rockstar in the Quarter. "I could've been getting hammered on Bourbon Street, watching girls flashing right and left," he said as we rocketed down I-59 in his Camaro. "Instead, I had to spend four hours watching Clausen and the rest of those douchebags play a game they obviously didn't care about and stink up the Georgia Dome." 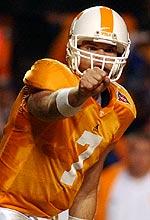 Apparently you can spell "citrus" without "UT," but you still can't spell "another excruciatingly lame loss to Georgia" without "Casey Clausen."

This theme repeated itself the next morning, as Darren hunched over his laptop in our hotel room trying to come up with a lead for his follow-up story. "How do I write an interesting story about such a shitty game?" he asked. "Write what you feel," I told him. "Your lead should be, 'I could've seen boobs.' " He typed that as his first sentence, though I don't think that made it into the final story. I'm sure I would've found out if it had.

But I'm getting ahead of myself here. About 6:30 a.m. New Year's Day, we rolled into a downtown N.O. that looked like those movies where a nuclear war or other catastrophe has plunged America into a grimy, dystopian future -- trash blowing about in the streets, roving bands of sullen youth who were most likely ending a night as opposed to starting a day. We went up to the hotel room where some friends of Darren's -- 10 of them, if I remember correctly -- were staying, and we squeezed ourselves in there and tried to grab a few hours of sleep.

The following morning, after watching some of the bowl-game action from early in the day, we headed out to tailgate. Downtown New Orleans, it must be said, is not a great place for tailgating unless you're cool with the roar of crowds and marching bands being replaced by the roar of semis racing down I-10 a few dozen feet over your head. But bourbon consumed beneath I-10 gets you just as plastered as bourbon consumed on the north campus quad in Athens, so by the time we headed into the Superdome we were tuned up pretty good.

It goes without saying that Georgia won the game, or I wouldn't even be telling you all this. The game itself wasn't all that compelling, to be honest -- it was pretty much just gravy on top of the best season Georgia had strung together since the Herschel days, and was probably only the 9th or 10th most exciting game out of 14 we played that season -- but it was still an awesome experience just to be watching the Bulldogs, after 14 years of terrifying lows, dizzying highs, and creamy middles since Vince Dooley surrendered the coach's job, finally reclaim elite status. Now, of course, it's hard to look back on that night without also thinking of what transpired in that building three years later, and it almost seems just gratuitously cruel to point out, as we did, that Tulane had more conference/division championship banners up in the Superdome than the Saints did -- but, well, I promise it was funny at the time. 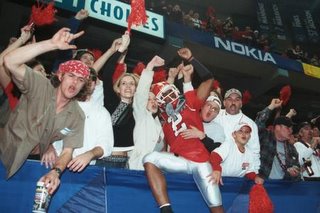 After that, it was naturally off to the Quarter, where the Georgia fans outnumbered the FSU people at least 2 to 1. The story gets a little hazy at this point, for obvious reasons, but I do remember the exact number of pairs of boobs I saw: 2. One pair belonged to me, as I flashed a group of girls on a balcony in the hopes that they'd toss some beads and then return the favor (that's just my steez, ladies, and yes, I'm single); and the other belonged to a trannie stripper who was shaking what his/her momma gave him/her on the corner of Bourbon and some other street. I have to say this came as a disappointment, both to Darren and to me.

I was not disappointed, however, by our trip to Harrah's on Canal, which was jampacked not only with Georgia fans but current and former Georgia players. Including my boy, my dawg, the one and only Champ Bailey, who was hanging out with his "little" brother Boss, a linebacker on the '02 team. I put "little" in quotes because while Champ isn't all that massive a guy, at least when you see him out in public -- I had to look a little closer to make sure it was really him when I first saw him -- Boss is freaking ginormous. There are many celebrated photos of #45 flying straight up into the air like the shark in the opening credits of "Jaws" to block a punt or field-goal kick, and I can assure you The Boss looks even more massive and imposing in person. Darren tried to get me to go over and introduce myself or something, but I was wearing my #4 jersey at the time, which would've looked a little retarded, and jersey or no jersey I have no doubt that whatever I said to them would've quickly devolved into a "Chris Farley Show" of nervous fawning that would've left all three of us uncomfortable. 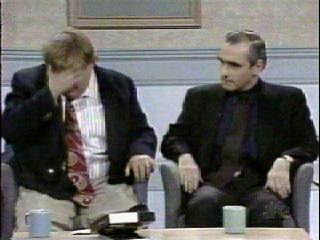 "Hey . . . remember that time you returned an interception for a touchdown against South Carolina? Remember that? That was awesome."

After a few hours watching other people gamble money, we trucked our drunk asses back to the hotel, packed ourselves back in with 10 or 12 other people, and crashed. The next morning it was back to Georgia.

And thus ends my story, which I guess wasn't really that interesting, but in addition to getting watch Georgia cap off an unexpectedly kick-ass year -- something I hope will be repeated in Sugar Bowl LXXII: The Atlanta Season on Monday -- I got to do something I can now file away with my trip to the top of the World Trade Center in '94 in my Memory Bank of Stuff People Can't Really Do Anymore. I'll always have a special place in my heart for the ATL, I hope the Sugar Bowl returns to New Orleans one day, if for no other reason than because it'll probably be easier to find cheap tickets when a bajillion UGA alums don't live within a 30-minute drive of the venue.

Oh, and because there'll be more boobs. I really want Darren to see some boobs.
Posted by Astronaut Mike Dexter at 8:36 AM