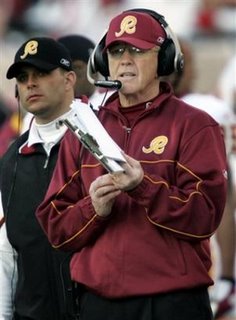 Take a good look at the fella in the picture above, because this man is The Truth, son. Here's a number for you: 132. That's the total number of yards the New York Giants accrued on their way to becoming the first team to get shut out in a home playoff game in more than a quarter-century. Now, why am I showing you a picture of the Redskins' coach while quoting the Giants' statistics? Because the Skins had fewer yards than that on Saturday and still won. When your coach is The Truth, you can do these kinds of things.

Now, was it an ugly win? Oh, you bet your ass it was -- on a beauty scale of 10 (the Rose Bowl) to 1 (pick pretty much any win from Georgia's 1999 season), this was a 1, and it may not even make it that high if you decide you want to get decimal points involved. But it was an awesome win to me, because it made the month of January exciting again. With a very few notable exceptions over the last 10 or 15 years, the final gun of the college national-title game has been a profoundly depressing moment, because it means that unless I can find an NFL team to pretend to care about, I don't get to participate in the final glorious month of football as anything more than an impartial observer -- it's kind of like being in Model UN in high school and getting stuck representing the Holy See. Maybe once or twice in a millennium I'll get lucky and I'll get to pretend the Falcons might actually go all the way, but other than that, it's a cold and lonely month since the Redskins are almost assured to have played themselves out of playoff contention by Thanksgiving. But not this year. Now instead of congratulating my friends on how awesome the Jags or the Bucs or the Pats are this year, I get to believe again. It's entirely possible that all this breathless triumphalism is preparing me for nothing more than the Skins getting donkeybonked up in Seattle this weekend, but even if that happens, you won't be able to convince me the Redskins aren't back. Because The Truth is back.

That was the meat of the weekend, but there was also plenty of gravy, including beautiful weather, a Saturday night out with a hot blonde, and a James Bond marathon on AMC. (The girl I went out with Saturday -- do you think it would creep her out if I asked her to wear nothing but a bikini and a knife the next time she comes over? I mean, I'm just asking, but that particular ensemble didn't become iconic by accident.) Not only the best gadgets and the best chicks in movie history, but some of the best theme songs, too. And I'm not even talking just about the classics, either, like "Goldfinger" or "Live and Let Die," but does anyone remember "A View to a Kill"? Made in 1985, Roger Moore was pretty much collecting Social Security checks by then, and the theme song was done by Duran Duran, probably knocked off in between takes for Notorious. And it rocks. Hard. Maybe because it carries that tinge of menace you can only understand once you've seen Christopher Walken play a Bond villain, and you can only understand the creepiness of that once you realize just how much his association with supposedly innocuous "Saturday Night Live" characters such as the Continental and the "more cowbell" guy only intensifies said menace. Or maybe it's just me. 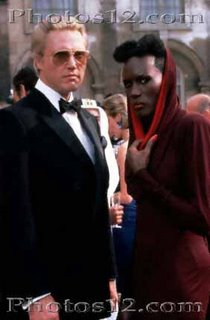 When you're standing next to Grace Jones and you're the one scaring people, that is an accomplishment.

Switching the topic a little here, but speaking of people whose menace is tinged with comedy (or vice versa), how is it that Marcus Vick, whose metamorphosis from football player into rap sheet creator came as absolutely no surprise to anyone who'd ever heard the name "Mo Clarett," still managed to surprise even the most jaded among us with the sheer velocity of his downfall? I mean, here's a guy who was walking on Communion-wafer-thin ice since having applied the old "grass on the field" maxim a little too liberally in Blacksburg a couple years ago, still manages to get kicked off the team thanks to his nifty personal-injury stunt in the Gator Bowl, then waits until after he's declared for the NFL draft to get caught waving a gun at some kids outside a McDonald's. (Before you even ask, yes, the "he was only trying to buy his date a Happy Meal" joke has already been made.) Proving once again that he's really only intimidating when the opponent is of absolutely no consequence whatsoever.

I don't know what kind of a pro prospect the kid's gonna make -- on the one hand, he did manage to injure himself celebrating an ultimately meaningless score (during the ACC championship game) in a manner so embarrassing that only the NFL's Bill Gramatica has been able to match it. On the other hand, even Lawrence Taylor showed some remorse when he fucked up a dude's leg, and that was only by accident. And I don't know that I want to see Marcus showing up in any of those United Way ads, because "Won't somebody think of the children" means something completely different coming out of his mouth from what it does coming out of anything else's, and it involves dabs of Sex Panther cologne and a twenty slipped to the desk clerk at the Days Inn to ensure that he "didn't see nothin'." (OK, I had to make one joke.) In the end, though, this is probably all academic, because I'm willing to bet good money that the closest Little Vick ever gets to an NFL playing field is waiting outside the Georgia Dome next to big brother's H2, with a shammy at the ready in case a pigeon manages to crap on it. 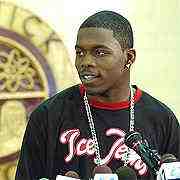 Sorry if I sound a little schadenfreude-ish about the whole thing. It's not that I wish misfortune or a "Boogie Nights"-like failure spiral on anyone, particularly a Hokie, but the point is I didn't have to wish it -- New Mexico asked for, and got, the whole thing himself. And what I'm worried about is the prospect that, as somebody in the Broncos front office did with Clarett, somebody is (at least temporarily) going to mistake Little Vick's dipshittery for "passion." And if that confusion is enough to somehow get Vick drafted before my boy D.J. Shockley this spring, you're gonna have to bodily restrain me from driving up to Virginia and doing some leg-stomping of my own.

Of course, we could avoid this all right now if someone could gather Little Vick together with Kevin Federline, Mike "Brownie" Brown, Ashlee Simpson, Sean Hannity, and that guy who used to be in Creed and put them all in a house. Then it'd be a reality show called "The Worthless Life." Wouldn't you watch a show like that? Hell, I'd watch it.
Posted by Astronaut Mike Dexter at 10:03 PM

I think I could cry - Vick and Clarett had such potential and opportunity, and they had no appreciation of the fact this did not make them "god"!

...but why cry - Hail to the Redskins! You are right - it makes up for a lot of things!

My friend Brian had a different take on the 'Skins game, but you should still check out his blog: http://laststopthistown.blogspot.com

It is "chamoix" and tell us about the blonde! More importantly, after seeing you once, is there any chance she wants to see you again?

I'm pretty sure "A View To A Kill" was a hit single, as well. Of course, I had a big thing for Duran Duran when I was little, so I could just be creating memories that never happened, sandwiched in between ones of watching the videos for "Rio" and "Hungry Like The Wolf." Thank God my mom was still young and watched MTV with her kid. I was ON TOP of the rock scene in Kindergarten.