The postgame report as presented by Dave Attell and Sara Silverman. 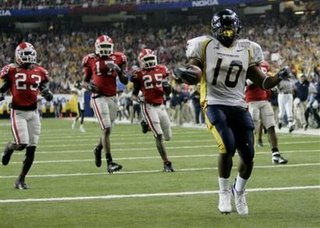 A posse of Georgia defenders comes to the unpleasant realization that, at times, the "tackle" part of "tackle football" can be just as important as the "football" part.

I'm too exhausted to say a whole lot about last night's Sugar Bowl, and certainly neither insightful nor clever enough to make any analysis that The Drizzle, Ian or Baby Sis haven't made already, so since obscenity-laced post-bowl-loss e-mail exchanges seem to be all the rage lately, here's what I initially fired off to fellow Jawja alum and Official HJS Bestest Buddy Kristen, currently kickin' it in Maryland:

OK, you know what the worst part of that game was? It wasn't the getting bogged down 28-0 in the second quarter, though that did bring back plenty of juicy PTSD memories of the '99 Auburn-Georgia game which was as close to a living nightmare as I've ever experienced in my lucid, wide-awake life. It was storming back on both offense AND defense to pull within three points at the very end, only to fail to seal the transaction and end up losing anyway. It was like stepping to the absolute hottest woman at the bar, getting shot down, preparing to leave and then have the same woman sidle up to you and say she was sorry for being rude, she'd really like to go home with you, and then you get her home and you've got her pants off and then . . . splack. And you know what, Sugar Bowl? We CAN'T cuddle. It's much too late for that now. And I know this probably DOES happen to a lot of guys, but we are not "a lot of guys," we are the University of Georgia, and when we take a bowl game back to our place we [copulate] THE [feces] OUT OF IT! That's what we DO! . . . We're Georgia and we GET! IT! ON!

I want to apologize for that. That was totally inappropriate.

At first I was going to put Kristen's response up here, but it's basically an analogy comparing the game to men who, uh, finish too soon from the female perspective, and it's probably even fouler than mine.

So, yeah. Colorful, but cathartic. The good ones always are, aren't they?

Anyway, since it is now time for all Bulldogs to salute our Mountain State rulers, I have to bow down to We Must Ignite This Couch, for having, if nothing else, maybe the best blog name in history. And with that, I'm done with football until the Redskins take the field this weekend, except to say this: Texas, 44-38. You heard it here first.
Posted by Astronaut Mike Dexter at 10:15 PM

Nice analogy. At least your kicker can make a simple goddamned PAT.. And now I'm kinda curious to see what Kristen had to say about it...

Hail to the Redskins!

Oh damn, you're a Redskins fan too? My Bucs are going to wipe the floor with Gibbs and 'skins this weekend (unfortunatley as I puncture both eardrums with a hot poker from being forced to listen to the ESPN crew one more time).

I want to make it clear that I normally pride myself on rooting against anything Texas-related, be it the Cowboys, Astros, Rangers, Aggies, Bushes, whatever. But I have to make an exception for the Longhorns -- again, I'm invoking the if-you-accepted-me-to-college-I'll-holla-back rule, plus Austin is one of the few Texas towns that isn't overrun with Republicans, and UT has some of the hottest coeds in the bidness. Plus it'd be worth seeing an SC loss if only to bring the long, grueling ESPN-USC lovefest to an end.

I can tolerate the USC lovefest because there is nothing more that I would love to see than a Texas loss in any sport. USC wouldn't run the table next year anyway. USC gave up one point more than Texas A&M. Actually, A&M's defense gave up 33 points and single handedly knocked VY out of the Heisman race. With or without VY at Texas, they probably will lose to an improved and angry OU or Texas A&M and I'll have a big smile on my face.