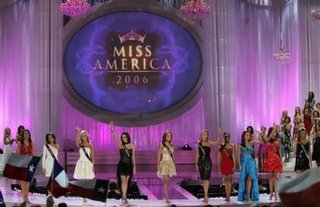 First time in Vegas and not one of them chose craps or blackjack as their talent?

Last night was the Miss America pageant, carried live from Las Vegas on CMT, otherwise known as Country Music Television. For reasons I'll get to in a minute, I actually wanted to watch this, which makes the first time I would've ever deliberately watched something on that network . . . but guess what? My cable company doesn't carry CMT. In Birmingham, Alabama! Which is like, I don't know, a provider in Miami not carrying Univision. Or one in Brooklyn not carrying . . . uh, the Jewish Network. Sorry, that analogy was a lot harder to make than I thought it was going to be. Anyway, I got my Maryland homegirl Kristen to text-message me updates throughout the event, so that, at least, kept me informed.

The reason that I was so interested in this, of course, was one Monica Pang, for whom you will recall both Kristen and I cheered our asses off as she stormed to victory in the Miss Georgia pageant last June. And here's a true story, hit up the link if you don't believe me: A couple months ago I was hunting through this blog's archives to try and dig up something I'd posted or linked to over the summer, and I randomly clicked on the comments thread for the post I did about Miss Georgia, and who had left a comment that had somehow gone unnoticed for damn near four months? Monica freakin' Pang, that's who, Miss Georgia her ownself. And she didn't even leave something like "You're a 'tard" or "I wish you were funny" like I'm accustomed to getting. So based on that, I actually threw caution to the wind and e-mailed someone from the Miss Georgia organization to see if I could swing an interview with her. I mean, why not, right? And it wasn't going to be the usual crap like "Oooh, are you nervous on stage?" or "What do most pageant contestants use to keep their swimsuits from riding up their asses," none of that bush-league crap -- we were going to sit down over beers or maybe cupcakes and talk about the Bulldogs' season and where she predicted D.J. Shockley would go in the draft, whether she likes George W. Bush, her favorite places to go get hammered in downtown Athens, that kind of thing. Oh, and how the hell she found her way to this blog in the first place. My first question was going to be, "Tell the truth, you Googled yourself to find out if any of the other Miss Georgia contestants were talking shit about you online." Not that I'm judging. I probably would've done the same thing.

Anyway, the Miss Georgia rep probably rumbled pretty quickly the fact that Ms. Pang had better things to do than slum it with this smallest-of-small-time blogs, so the interview (obviously) never came through. But Kristen and I, and no doubt all of Bulldog Nation, were rooting for Monica in Miss America even if we were inexplicably unable to watch it.

Kristen's text messages informed me that Ms. Pang had made the round of ten, then of five, and finally that she had come in second behind Miss Oklahoma. Now, nothing personal against Jennifer Berry, whom I'm sure is delightful, but -- really? Oklahoma? I just get this vibe off her like she jumps around and talks in a really high-pitched voice when she gets excited and has a dog small enough to be carried around in a purse, possibly the currently trendy cockapoo/Maltese mix that my mom thinks should be called a "cocktease." (Which inspired me to try and breed my own dog with a cocker spaniel/Doberman pinscher mix and create the world's first Boston cockpincher, but that's really neither here nor there.) Anyway, I know opinions are like assholes, everyone has them, the Miss America judges have theirs and I have mine, theirs just happen to be wrong. I mean, look, Miss Georgia is gorgeous, she can rock the shit out of some Chopin, she's a UGA journalism graduate which is as sure a sign of genius as there is these days -- what more did they want? Someone to beat Spassky at chess or invent cold fusion right there on stage?

Well, I guess there's no point in getting too chafed over it now. But suffice to say that while she may be #2 on the stage (and maybe #10 or 11 in the program), she'll always be #1 in our hearts. 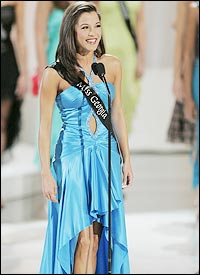 Edited to reflect the fact that Monica was first runner-up, not second (thanks Meghan).
Posted by Astronaut Mike Dexter at 9:50 AM

Monica was actually first, not second, runner-up. I only saw the last hour or so, but I was SHOCKED that OK made it. Although she did have a good answer for the backstage question they asked the final three. But she was no Pang.

I've read responses from several people, some even non-Bulldogs, who agree that the wrong woman got the crown. I'm not saying that we need to plant any kind of dirt that would throw shame on Miss Oklahoma and require the pageant to call in the reserves, 'cause that would be wrong. Especially if someone photoshopped some pictures of her with, say, Howard Stern. Or into the Colin Farrell sex tape. Because that would be wrong, wrong, wrong.

Oh, and the solution to bathing suit ride-up? Golf Grip. You heard it here first.

Were the voting machines from Diebold?


Cuz You know, I've heard that there's a pattern of the wrong person getting the votes in recent national elections.

What's wrong with a little "bathing suit ride up"?

Get a new photograph, Doug. Your picture makes you look like a drunk Young Republican frat boy!

I don't know who you talked to, but I'm always up for a fun interview. Thanks for cracking me up!

Hopefully, it won't take you another four months to come across my message...

I didn't actually watch the pageant (since I live in the tiny country of Malaysia where the Miss America pageant takes a back seat to soccer matches and Sex & The City) but judging from the countless newspaper articles the next day, Monica Pang kicked ass! (OK so there might be a tinnnyy bit of bias since she's half-Malaysian and it's our country's only claim-to-fame since Sarah Marbeck's affair with David Beckham which is the closest we will ever get to football glory) It's nice to see a little diversity in pageants rather than your everyday blonde haired blue eyed "I want world peace" type woman :)