Profiles in just not giving a crap anymore.

I assure you this is real: 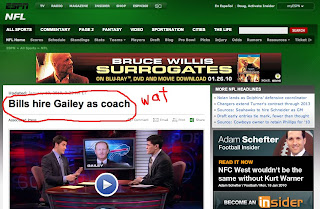 That's right: Chan Gailey, whitest man in America, innovative architect of "Chan Gailey Equilibrium," and offensive coordinator who was fired last year after three preseason games -- that's right, not even regular-season games, preseason games -- with the Kansas City Chiefs, has been hired to be the head coach of something. In this case, "something" is the Buffalo Bills, a New York-based charitable organization that provides work opportunities for mediocre, washed-up football coaches, in addition to frequently fielding a professional football team.

I have conflicted emotions about this. On the one hand, I am bitterly disappointed to see that Gailey didn't return to the college level and end up at any of Georgia's arch-rivals who were hunting for head or assistant coaches over the past few weeks. (Gailey attended the University of Florida and was a grad assistant there in the mid-'70s; why, oh why did they not see fit to bring him home?) On the other hand, it put a lot of things in perspective for me, as a lifelong Washington Redskins fan, vis-á-vis Daniel Snyder's almost uniformly atrocious ownership. The guy's an idiot, no doubt, but at least he never seriously (to my knowledge) considered hiring Chan Gailey.

So even though I stopped doing the Monday Morning Cage Match a couple months back just because I got kind of bored with it, it seems like the perfect way of determining which coaching hire was more inexplicable: the Chanster to the Bills, or Lane Kiffin to the USC Trojans. Both decisions are redolent with apathy, the actions of managers who for whatever reason lost all hope of being able to hire someone good and were content to simply throw a contract through the car window of the first guy who actually expressed any interest in the job -- actually, in Gailey's case, the hiring was so surrender-riffic that they probably just text-messaged him a contract, but whatever. Using an expanded version of the Cage Match, we shall determine which of the two hires was more embarrassing: Let the Gailey-Kiffin battle royale begin!


CONCLUSION: USC's hiring of Lane Kiffin is actually more embarrassing than the Bills' hiring of Chan Gailey. Congratulations, USC: Buffalo hired a coach whose very name has become synonymous with mediocrity and the bare minimum in terms of acceptable achievement -- the "wearing only 15 pieces of flair" of football coaches, if you will -- and yet all available evidence indicates that it was still a smarter move than bringing Lane Kiffin back to Los Angeles. This may seem hard to fathom right now, but in three years, when the Bills are patting themselves on the back for another 8-8 season while the Trojans anxiously fret over whether recruiting violations will keep them from accepting the EagleBank Bowl bid that's otherwise rightfully theirs, you will see that I was right.
Posted by Astronaut Mike Dexter at 6:59 AM