The Friday Random Ten+5 goes back to the movies, again.

The nominees for the 2010 Academy Awards get announced on Tuesday, so it's time for me to make my list of my favorite movies from last year. Not that a lot of these (or any of them) are necessarily going to get mentioned when the Oscar nominations are handed out -- this isn't a list of which movies had the greatest cinematic merit or sweeping societal significance, just a list of the movies I liked the most. (Keep in mind I split 2009 between Birmingham, Alabama, and Columbus, Georgia, so it's not like I got a ton of exposure to any experimental, avant-garde foreign films.)

But with that in mind, here's this week's +5, my Five Favorite Films From Last Year: 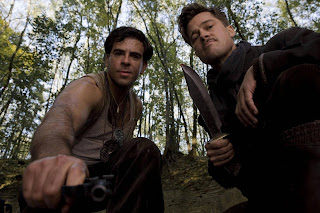 5. "Inglourious Basterds"
Despite what some people may have tried to tell you, there's nothing particularly complicated, or even particularly meaningful, about this movie. It's a straight-up revenge flick, though there are just enough people trying to get revenge, and with just enough different motivations, to keep things interesting. The acting is excellent across the board, the set design is superb, and a whole bunch of Nazis get bludgeoned, shot up, blown up, or carved into along the way. I'll be honest, after the summer I had, it was kind of a nice release. 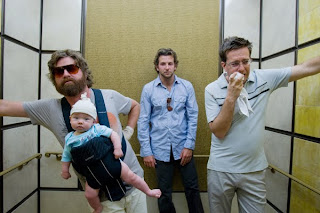 4. "The Hangover"
My mom asked for this DVD for Christmas, which might give you some idea as to why I turned out the way I did. Anyway, a bunch of people get drunk; a baby gets lost; Mike Tyson sings a Phil Collins song; Zach Galifianakis gets tased in the face; and the weird, socially maladjusted gambling savant character's name is "Doug." That all adds up to a big bowl of awesome, and it was two of the most fun hours I've spent in a theatre in a long time. 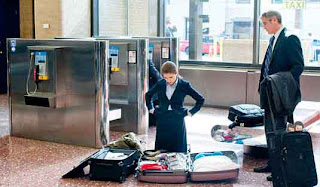 3. "Up in the Air"
Say what you will about George Clooney, but the guy can act, and this was a role tailor-made for him -- that of Ryan Bingham, a corporate angel of death who's hired to swoop in and put his arm around the shoulders of cowering employees as he tells them they're being downsized. He spends three-quarters of his typical year flying from city to city doing this, but when technology threatens to make this task obsolete, he makes a plaintive case for the need to perform the task with a human touch. Yet that belief in the importance of human connection is completely at odds with his own rootless lifestyle, which is predicated on carrying as little baggage with him as possible -- human or otherwise -- at all times. Watching those two sides converge makes for a fascinating character study, not just of Bingham as an individual but of the country he represents. (Plus it's got Jason Bateman, Danny McBride, and Sam Elliott in it.) 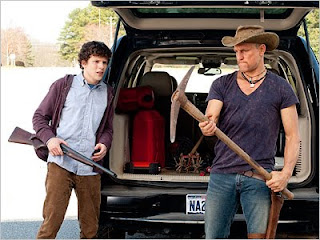 2. "Zombieland"
This isn't an especially complicated movie, either, but boy, was it fun. It's the rare post-apocalyptic movie that has the stones to explore the fun side of a complete meltdown of humanity: Sure, you have to defend yourself from bloodthirsty zombies, but in between you get to take whatever you want from stores, shoot guns, crash cars into things, and basically let your id run wild. This was one of those movies that could've lasted twice as long as it did and I still would've been hugely entertained the entire way through, and yes, the celebrity cameo about midway through the movie is every bit as awesome as you've been told and then some. 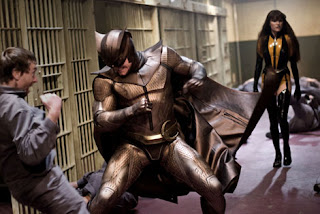 1. "Watchmen"
I'd never read the graphic novel this movie was based on before the film was released, so I wasn't one of those people grousing beforehand about how there was no way to film the novel without completely butchering it. After reading the book, though, I have to say the movie was a pretty faithful interpretation, and what changes the filmmakers made might've actually been improvements. Not that it could've been easy to adapt that storyline, but the movie kept intact nearly all of the critical plot points as well as the themes of absolute power corrupting absolutely and where the line exists between order and despotism. Definitely one of the best superhero movies I've ever seen, maybe right up there with "The Dark Knight."

And the worst movie I saw all of last year: a tie between "Transformers: Revenge of the Fallen" and "X-Men Origins: Wolverine." If I had to pick, I guess I'd say "Transformers" was the worst of the two, if only because I ended up watching it from the second row of an IMAX theatre. After two and a half hours of that, I needed a stiff drink and a nap. Seriously, Bay, you owe an apology to every American male who raced downstairs on Christmas Day 1984 to find Optimus Prime under the tree. The third movie better be fucking gangbusters, or we're coming after you with torches and pitchforks.

Feel free to put your own Random Tens and/or top movies of '09 in the comments.
Posted by Astronaut Mike Dexter at 8:14 AM

Hate to have to correct you, Doug, but the weird, socially adjusted character's name was Alan, not Doug. Doug was the groom.

Did you catch 'G.I. Joe'? It made 'Transformers' and 'Wolverine' look like 'Star Wars' and 'Kill Bill'.

I recommend Chris Orr's non-review of the movie to get a feel for it:
http://www.tnr.com/article/books-and-arts/the-movie-non-review-gi-joe-the-rise-cobra

Also 'Up.' And 'Sherlock Holmes' was much, much better than the critics seem to think.

Good list Doug... glad to see you gave Watchmen some props, it was an underrated film. It's in my top ten, not my top five. Here's my top five from your resident film expert (or at least I pretend to be because I went to film school.)

5. The Brothers Bloom - Gets a little messy at the end, and it almost resolves everything too neatly for my tastes, but it's still a fantastic sophomore film for Rian Johnson.

4. Up In The Air - The first movie from Jason Reitman I wholeheartedly liked. Doesn't feel forced, like Thank You For Smoking did, and doesn't feel self important, like Juno did.

3. Drag Me To Hell - Raimi doing horror is an awesome thing. This is his best since Evil Dead 2. Now please stay away from Spiderman movies, Sam.

2. Away We Go - What could have ended up being another run-of-the-mill indie flicks got an impressive human touch from director Sam Mendes. Plus it's got my favorite quote from the entire year... "Babies are relly good at pretending they're not breathing. I put a pillow over it's head. I thought she had stopped breathing, but she hadn't. She was sneaky, but I'll get her next time."

1. (500) Days of Summer - I might be overstating this, but it could very well end up being one of my favorite films ever, and that's saying something. It's so simple and elegant and joy-filled, and it doesn't cop out the viewer.

I really admire this, I mean it really looks interesting! Very nice write up. Anyways, its a Great post.