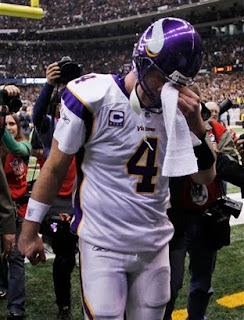 Sorry for your loss. Door's that way.

Your Super Bowl matchup is thusly locked in, and for the first time in a while, it's got two teams I actually like -- no Patriots, no Cowboys, and praise be, no Brett Favre. Seriously, the thought of two solid weeks of Favre hero worship on the part of the media might have been enough to make me voluntarily not watch the Super Bowl for the first time in as long as I can remember.

But that just meant the talking heads had to pack their planned two weeks of hero worship into a single column or postgame show, kind of like those shopping sprees they used to give away on Nickelodeon where you'd have five minutes to barrel through a Toys 'R' Us shoveling as much stuff into your shopping cart as you possibly could. And the rod-gobbling followed a predictable pattern, whether it was the print media (here represented by the equally predictable Favre hagiographer Peter King) . . . 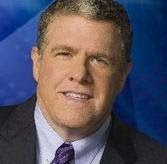 No matter what you think of Favre -- and it's no secret I think he's the most charismatic and interesting player I've covered -- you have to admire how he bleeds in front of us. He goes out and gets the snot knocked out of him ("We were determined to hit him over and over and make him feel it,'' said none other than his old friend with the Packers, Saints safety Darren Sharper), somehow survives, then makes a throw he never should have made.

. . . or Tom Jackson, normally one of the saner hosts of ESPN's "NFL Countdown": 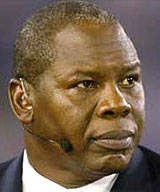 "He's not afraid to throw a pick. That's the thing I admire most about him," Jackson said on "SportsCenter."

Everyone owes the Saints a thank-you card, because this is what they saved us from two weeks of: Commentators-slash-fanboys earnestly trying to convince us that Favre is so awesome even his brain farts smell like fresh-baked croissants. Look, resentment over Favre's retirement gamesmanship and other offseason asshattery aside, I'm as impressed as anyone by the career the guy's put together, but even with a body of work as impressive as that, there comes a point at which the adulation becomes just a bit ridiculous, and we streaked past that point way back in August.

But since one's embarrassments only add to his or her legend, I see no reason why we shouldn't revisit and, in some cases, rehabilitate the memories of those who've gone and embarrassed themselves before Favre. Try these on for size:

· "Say what you will about Willie Martinez, but it takes guts to not have a defender within 10 yards of an eligible receiver. People need to remember that."

· "He's not afraid to throw five picks in a game. Even when the opponent just broke a 21-game losing streak. That's what I admire most about Quincy Carter."

· "Everyone has their own opinion of Dan Snyder, but it takes guts to hire an untested career QB coach as the head coach of an NFL franchise, and I admire the hell out of that."

· "Why do I call myself a lifelong John Travolta fan? Simple: because it takes a lot of courage to make a movie like "Battlefield Earth."

· "That's why you've gotta respect Canadian geese: They're not the least bit afraid to fly into the engine of an Airbus A320."

· "We can debate the legacy of George Armstrong Custer all day, but let there be no dispute about one thing: The man wasn't afraid of Indians."

Feel free to throw your own in the comments.
Posted by Astronaut Mike Dexter at 9:59 AM

Email ThisBlogThis!Share to TwitterShare to FacebookShare to Pinterest
Labels: football, miscellaneous stupidity, people and things that are dead to me, teh suxxorz

Well Doug, you left out the obvious one.

"Even with Lou Groza, Jr., Fabris still tries to kick off to a place on the field that will definitely test the mettle of all ten of the most promising walk ons Georgia has. You've got to admire that."

"You have to hand it to Doug - he isn't afraid to take a simple idea and drive it straight into the ground." :)

"You really have to respect the Octomom on her recent weight loss & new hot body. To have the courage and determination to devote 4 hours working out every single day while juggling 12 children is to be commended."

nice smokescreen to cover over the fact you picked the Vikings in that pool. your picking acumen remains unparalleled.