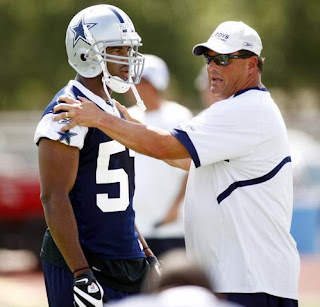 So the longest and most frustrating wait in the history of Athens, Georgia (other than the wait for a table at The Grill after a night game), has come to an end -- Georgia has a defensive coordinator again, one Todd Grantham, late of the still-alive-in-the-playoffs Dallas Cowboys. Now that that's over with, we can get to the more important business: kibitzing this selection to within an inch of its life.

I'm joking, of course, but I'll be candid: When Grantham's name first started surfacing as a candidate for the DC position, I didn't get particularly excited. The myth has long since been busted that success in the NFL automatically equates to success at the college level, and it's been a long time since Grantham had to get involved in the grunt work of college-specific tasks such as recruiting. But the more I read about him -- and the more praise I hear about him from sources that I trust, David Hale chief among them -- the more comfortable I feel. For one thing, you can't deny that his NFL experience is likely to be a big draw for recruits. He's also a hell of a coach, as evidenced by the Cowboys' excellent defensive line this year. (Consider, if you will, what high praise that is coming from a diehard Redskins fan.) No, his stint as DC of the Cleveland Browns wasn't especially memorable, but name me anyone who's been successful as part of that franchise recently. In the end, he comes to Athens with substantially more experience than Kirby Smart, whom we were all panicking over just a few days ago.

Do I know for a fact that Grantham will succeed brilliantly at UGA? No -- but neither does anyone else. Naturally, I'd like to think that he'll be a noticeable improvement over Willie Martinez regardless, but at this point all we can do is wind him up and let him go. All I ask from Bulldog Nation is this: Let us give him time do his job. I know we all want to see the Georgia defense instantly transformed into the Steel Curtain of the 1970s, but between our personnel losses on defense and the time it takes to adjust to any new scheme -- particularly one as dramatic as the switch from Martinez's scheme to one that, say, places defenders within five yards of an opposing team's receivers on a regular basis -- there are going to be some growing pains in Grantham's first year. Please, please, please, Bulldog Nation, let's recognize the circumstances and show some frickin' confidence through these challenges and hiccups, rather than being like these guys, who want to fire someone the minute something goes wrong. Whether you're jazzed about the hire or not, there is nothing, and I mean absolutely nothing, to be gained by melting down and proclaiming the Georgia program to be already dead and buried. Look at it this way: Even the AJC's Mark Bradley -- who just a few days ago was proclaiming Georgia's DC search a Titanic-caliber failure if it brought in anyone other than Kirby Smart -- now says that Georgia's hiring of Grantham will ultimately do more for its program than that other Georgia team's search for a defensive coordinator, the one that today brought former Virginia coach Al Groh to Georgia Tech. I don't think either hire was a monstrously bad one, certainly, but I concur with Bradley that in the long run, Grantham has more upside for UGA than Groh does for GT.

And I'm not saying this just because I desire to see everything Georgia Tech does athletically, from their football team to their basketball team down to how clean they keep the pool for their swimming and diving teams, to be an abject failure. Groh's been a defensive guy throughout his career, and served as his own DC at Virginia -- but while his defenses there were frequently good (given the state of the Cavs' offense over the past few years, they'd have to be for UVA to have won any games at all), they weren't necessarily great; Virginia was sixth in the ACC in total defense last year, eighth the year before that. Groh, like Grantham (from what I'm hearing), plans to switch the Jackets' defensive alignment from a 4-3 to a 3-4, which is certain to entail those same growing pains I mentioned earlier -- the difference is that Grantham is only 43, while Groh is 65, and it's reasonable to wonder how many more years Groh is going to feel like coaching. By the time he gets the team performing to his satisfaction in the 3-4, is he going to be ready to just hang it up? Groh's also a legendarily stubborn guy, cranky even, and it's going to be very interesting to see how his personality meshes with the also stubborn-and-cranky Paul Johnson, particularly with Groh being a former head coach himself now having to work under someone else.

Ordinarily this would be the part where I point out that Tech just hired a defensive coordinator whose defense they hung 34 points and 447 yards on earlier in the season. But I'm trying to be a nicer guy in 2010, so I won't. 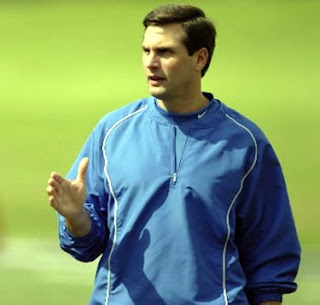 The last bit of coaching news on the docket today is the report that Tennessee is interested in Louisiana Tech's Derek Dooley for their still-vacant head-coaching position. Derek, of course, being the son of our legendary Vince Dooley, and a UGA Law grad to boot. I've heard a number of reports saying that Derek has already accepted the job, others saying it hasn't even been officially offered to him yet, with UT still wanting to take a crack at another candidate such as Houston's Kevin Sumlin. But it still looks like Derek has a pretty good shot at being the next head man on Rocky Top.

On the surface, at least, I think it's a huge credit to Derek's talents that he'd be considered for such a high-profile job. But I kind of hope he turns it down, and not even because I'm all that worried about the Vince's-son-coaching-against-his-dad's-old-team storylines that are sure to blow up as a result. Here's why: Tennessee's program is in a very bad spot right now -- Lane Kiffin left a real mess behind by jumping ship when he did, and at the rate things are going, the Vols' athletic director may take some of the fall for that as well -- and I've heard a couple suggestions from Big Orange country that they might as well just write off the 2010 season (which, given personnel turnover, was going to be dicey even if Kiffin had stuck around) and focus on 2011. I'm worried that Derek Dooley, a young up-and-comer who clearly has many, many years ahead of him with which to build a coaching career, will end up being only a sacrificial lamb tasked with coaching the Vols for a few difficult years, and then fired once Tennessee has its sights on a "name" coach and are in a position to make a much easier transition than the one they're having to make now.

I'm not saying that UT would hire Dooley right now with that kind of plan in mind (although given the terrible judgment AD Mike Hamilton has displayed with regard to the football program over the past couple years, I can't say I'd put it past him, either). But completely independent of any assessment of Dooley's actual abilities -- which I think are considerable -- the next few years are going to be very rough in Knoxville no matter who's coaching. Consider, too, that Hamilton himself might not last much longer in his job; he's the one who made the controversial decision to fire Phil Fulmer, took what turned out to be a very bad risk in hiring Kiffin to replace him, and is now generally seen as having made a mess of the search to replace Kiffin. If I was a betting man, I'd say Tennessee will have a new AD before the end of the year. And we all know how new ADs like to put their "stamp" on a new program by installing their own hand-picked coach, even if that means having to get rid of the old one for only the most arbitrary of reasons; in theory, a new AD at Tennessee would be all the more likely to do that if Dooley (or whoever) were to lead the Vols to a string of 5-7 or 6-6 seasons. Looking at the landscape at UT now, one starts to understand a little better why so many presumably workable candidates have turned the job down.

Of course, if Dooley does end up taking the job, then between that and my, um, romantic connection to Rocky Top, then I guess I'd have to dramatically reassess my hate level for the Vols. (I certainly wouldn't put them above UGA in my rooting interests, of course; at best it'd be one of those root-for-them-unless-they're-playing-the-Dawgs kind of deals.) But for the Dooley family's sake, I kinda hope he doesn't. We all know Bobby Petrino is going to leave Arkansas in the lurch sometime in the next three or four years; for all we know, Les Miles might be skating on thin ice at LSU, too. I'm pretty sure there will be SEC coaching opportunities for Dooley before too long if he wants 'em. Just don't make me have to burn with hatred for your team every year, guy.

As for Tennessee, know this: If you do decide to hire Derek, then you damn sure better be prepared for the awesome power of . . . DOOLEY FACE. 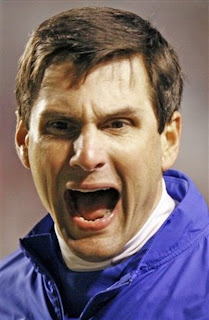 (Seriously, he yells a lot on the sidelines. A lot. Even for the WAC, it's kind of terrifying.)
Posted by Astronaut Mike Dexter at 11:50 AM

I'm a lot more worried about UGA poaching Dooley once Richt's milquetoast operation finally heaves its last than I am about him being some sort of test case for the Young Up & Comer Gambit.

"Dooley's actual abilities -- which I think are considerable"


2 to effectively give up or admit defeat by submitting a careless, ill-considered solution -- syn PUNT

OH! I just Daily Show'd YOU!

Sweet fancy Moses! You certainly did Colbert me. You delivered that line about Dooley with such passion...such heart...for a second, I actually thought you believed it. But it was all just an act...you had slipped seamlessly into your alter ego, Kip Pilkington, Knoxville's #2 drive time sports talk shock jock. Kudos sir. Well played.

Next time you're in Athens I'll take you to the pub, buy you a beer and we will both laugh at Tennessee and toast OUR boy Coach Shanahan. Hail to the Redskins...