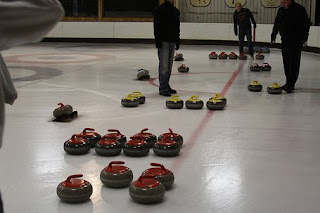 When Spencer and Holly were invited up to Knoxville to learn the sport of curling with one of the few bona fide curling clubs in the Southeast, my presence was requested as a co-novice who could perhaps absorb some of the foolish n00bness that would otherwise have been concentrated on just the two of them. And absorb I did. (They say that blah blah percent of life is just showing up, so I showed up.) Spencer's recap is here. A taste:

The question remains: is it a sport? What's it doing in the Olympics? Isn't it more of a game than a sport, a kind of overgrown bar distraction played on ice? Absolutely. Additionally, Ski-jumping is just formalized suicide, Biathlon is a quantified military training exercise, and short-track speed skating is a shoving match that happens at twenty miles per hour. Figure skating doesn't even have points or goals, and lies in the hands of potentially corruptible judges.

Curling is mesmerizing for one reason: its simplicity. Chess on ice is the usual comparison, but it may be even simpler than the endless variations and gambits of Kasaparov's game. Leaning out on the hack and staring down the ice, curling engages the game-playing brain at its most basic and addictive of levels. Put this there; leave space here; completely screw over opponent. Like the best games, it is a true zero-sum game, but unlike chess involves the body, a kind of meditative rock-toss you do over and over again until you're in the wordless space Zen Buddhist monks are always blabbing on and on about. The ice helps: there's blank whiteness, a few lines, and everything else evaporates away.

Curling doesn't involve speed or too much agility. You don't need a mountain to play it, and you most certainly don't need rhinestones, though if you wanted to wear a Johnny Weir body suit no one's stopping you from bringing fabulous to the sport. In fact, you can pretty much wear anything as long as you have clean tennis shoes on. It's really the only hard and fast clothing rule in curling besides "wear pants," and even that might be negotiable. NFL-style celebrations are also considered acceptable, as illustrated in Doug's thanking of the Supreme Being after a final point-scoring thrown on the Hammer, or the final toss of an "end" or round. 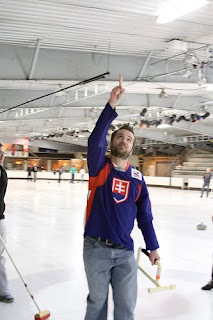 Hey, anything that involves that much beer can't be bad.
Posted by Astronaut Mike Dexter at 1:50 PM

Email ThisBlogThis!Share to TwitterShare to FacebookShare to Pinterest
Labels: blogs that are better than mine, my sordid personal affairs, non-football sports

Doug, your coolness factor just shot through the roof. I have been hooked on curling since Salt Lake City. It is the one olympic sport I will stay up to watch, and it's the first event I check the schedule for. All of my friends know me as the huge Bulldog fan, a football guy. So needless to say, I am severly mocked and riduculed at my schoolgirl-like excitement over curling every 4 years. I have never been curling, as the Atlanta area is inexplicably lacking in this area. The fact that you have been makes me jealous and hopeful.

About a year ago, the Friday random 5 was things you would buy if you won the lottery. My list just changed. "Opening a curling facility in Atlanta" just moved to the top of the list!(OK, second behind the lifetime season tickets at Sanford, but still...)

To a fellow curling fan, I recommend the song "Tournament of Hearts" by The Weakerthans.

We're gathering people who are interested in starting some curling in Atlanta at Facebook "Atlanta's First Curling Club". #atlcurl