Georgia's DC search, the Saban lesson, and good things coming to those who wait.

The Independence Bowl has come and gone, the year has changed over, and Georgia still doesn't have a defensive coordinator. To hear some portions of the UGA fan base tell it, it's time to panic.

Well, the AJC's Mark Bradley appears to be the main one reaching for the panic button, actually. And while a substantial portion of his commenters appear to agree with him, the comments threads in AJC.com's sports section on any given day can be counted on to be dumber than Lindsay Lohan and wronger than Bill Kristol. The people who actually know what they're talking about -- and here I'm thinking about your humble Georgia blogosphere, people like Paul Westerdawg and Kyle King and Senator Blutarsky, not to mention a few mainstream-media guys such as the Macon Telegraph's David Hale -- have appeared blessedly calm over the course of this search. But for those among you who are tempted to take Bradley's cue and start getting antsy, let me make a couple of points. 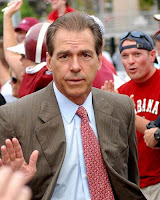 Think back to Alabama's last head-coaching search, one of the highest-profile, if not the highest-profile, such search in the last decade. Mike Shula was informed he would not be retained on November 26, 2006, just over a week after the Crimson Tide concluded their regular season with a loss to Auburn. Nick Saban was not announced as his replacement until January 3, 2007. Thirty-eight days. Willie Martinez was fired this past December 2, so if we use Bama as a model, we don't really get to start panicking until this coming Saturday, January 9.

That's semi-tongue-in-cheek, of course. There's no set date by which point fans should automatically get the green light to begin melting down over a protracted hiring process. But the point is that a lengthy coaching search does not automatically guarantee failure; if anything, moving too quickly is the more dangerous path. Alabama took 38 days and ended up with Nick Saban; Florida took only five days and ended up with Ron Zook. That's how it works sometimes.

And consider what a gigantic clusterfuck the Alabama hiring process looked like at times. Alabama AD Mal Moore, god love him, offered then-West Virginia coach Rich Rodriguez the job before knowing whether he'd say yes; announced that he'd taken the job before he said yes; and then looked like a complete fool when Rodriguez said no, he was staying in Morgantown after all. Know what that means? When Alabama hired Nick Saban, they got their second choice. OK, so that's kind of a mischaracterization of how things played out, but Alabama had already been told by Saban that he wasn't interested, and it was obvious that it would take a whole truckload of cash to move him from that position. Saban might have been their preferred choice, but taking a $4-million flier that he'd actually come to Tuscaloosa was a definite Plan B, strategically, in comparison to finding an established college coach much more likely to view Tuscaloosa as an upgrade (i.e. Rodriguez). Alabama botched Plan A and only then went double-or-nothing on Plan B -- to wit, crossing their fingers and using the nation's highest salary as an opener in the hopes of luring one of the nation's highest-profile coaches. It was by luck (and Saban's growing disgust with the Dolphins' front office), not skill, that Alabama pulled that off.

Contrast that to the deliberateness and discretion with which Georgia has handled their DC search. By all reports, we did make a more-or-less official offer to Bud Foster, which was turned down only when Virginia Tech bumped up his salary. And while we apparently expressed interest in talking to LSU's John Chavis, there's no evidence that we actually offered him the position before LSU bumped up his salary as well. So in spite of what Mark Bradley implies, we're not down to Plan C or worse at this point, and we're not at a point where not getting Kirby Smart from Alabama automatically = failure.

Bradley seems to think that what's most important here is getting the biggest name. I hope I've already made a pretty solid case that having patience and finding the right guy is more important than moving hastily just so that we can find someone with a name that guys like Bradley will find suitably noteworthy. Again, by the criteria Bradley appears to be using, we would never have even sniffed Brian VanGorder back in the early months of 2001.

I think Westerdawg absolutely hits the nail on the head with his take: "I'd lose a recruit or three to get the right guy." To me, that brief comment really offers some perspective on just how little there is to be gained by making speed the top priority in this search. So let's all squelch whatever urge to panic we may be feeling in the moment, and instead take a moment to be glad that Mark Richt, not Mark Bradley, is leading this process.
Posted by Astronaut Mike Dexter at 3:59 PM

Good post Doug. I agree that it'll happen when it happens, although it's always fun to speculate. Looks like the "it-guy" of the day is Todd Grantham.