Hmmmm, so . . . I seem to remember implying that I'd try to post something from Vegas last week, didn't I? Er, sorry 'bout that. Turns out that free wi-fi is oddly scarce in Sin City, but perhaps more to the point, so are concepts such as "sleep" and "sobriety." But I'm home now, awake, upright (more or less), and not even that poor; didn't get arrested, didn't wind up getting married to a hooker, didn't even get throwing-up drunk at any point, though not for lack of trying.

So what did I do? Well, I learned a lot about Vegas on my first trip out there, which I'll share with you in this horribly tardy Friday-slash-Monday Random Ten+5, in which the +5 is Five Things I Learned About Las Vegas On My First Trip To Las Vegas: 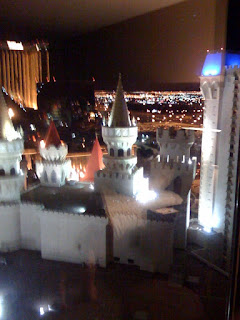 1.
Ordinary concepts of scale have no meaning here. Think of the biggest hotel you've ever stayed in, and the ones in Vegas are still three or four times bigger. And that's just the actual guest accommodations; add in the gaming floors, restaurants, shopping areas, sportsbooks, theatres/show halls, convention halls, and really crazy stuff like aquariums (Mandalay Bay), wave pools (ditto), and roller coasters (yes, the New York, New York casino has one), and a lot of these places are closer in size to some of the airports you've flown out of. 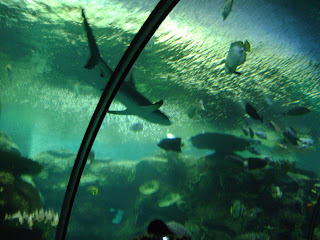 2.
And a lot of them are connected -- Excalibur (where we stayed), Luxor, and Mandalay Bay are all owned by the same folks, so they're all strung together by shopping areas -- so it's possible for you to traverse great distances without ever actually stepping outdoors. For instance, we went from our rooms on one side of Excalibur to the aquarium on the far side of Mandalay Bay (above), and we probably walked about three-quarters of a mile each way, all of it indoors. The fact that you can go such long stretches without actually going outside really messes with your sense of space (because you don't feel like you've covered all that long a distance until you get back to your room and you're about to collapse), but also your sense of time -- the whole thing about casinos not having any clocks is true, but most of these places also severely limit the amount of natural light coming into the gaming areas so that you don't realize you've been playing blackjack or dumping money into the video poker machine until six in the morning. 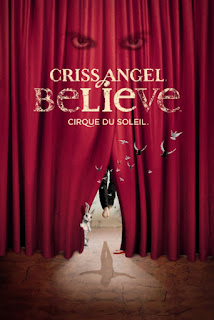 3.
When you're a kid, you'll take anything someone hands out to you on the street if it's free, simply because the concept of getting something for nothing is so novel, but past a certain age, people no longer take stuff just because it's handed out to them. I know this because there were people on street corners and in casino walkways offering everything from drink specials to show tickets to hookers, and 99 percent of the pedestrians were strolling right by. How jaded have we become, that enduring so much as a five-minute conversation with a casino employee is considered too big a price to pay for free Criss Angel tickets? Oh, that's right, because Criss Angel is out-of-this-world creepy and his fuck-me face is staring glassy-eyed at you from nearly EVERYTHING at the Luxor these days, even the goddamn casino chips. Just because you were tagging Holly Madison for about five seconds a few months back doesn't make you a rock star, buddy. 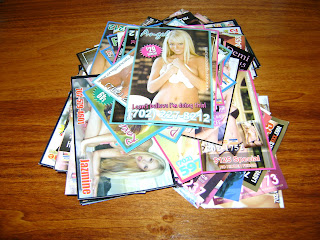 4.
I did take the little gimme cards they were handing out for hookers on the strip, though, just to see how big a collection I could end up with by the end of the trip. And once I had a stack about as thick as two packs of cigarettes, I figured there'd be some duplicates in there, but out of the stack of more than 100 little cards, there were only a handful of dupes. What this tells me is that there are more hookers in Las Vegas than customers, possibly more than actual people. That's got to be one cutthroat-ass business out there, then. On a side note, some of the girls on those cards I recognized as having been Playmates at one time or another, and I'm pretty sure you're not going to get to bang a Playmate by calling any of the numbers on those cards, fellas. 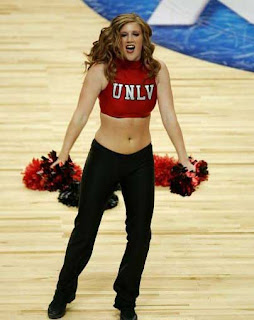 5.
I don't recall the University of Nevada-Las Vegas having developed an especially sterling academic reputation, but after three days in Vegas I've developed a newfound respect for anyone who graduates from UNLV in four years. Not only do you have the constant distraction of world-class gambling literally a 15-minute stroll away, but the quality of tail roaming the periphery of the UNLV campus on Sunday afternoon was also world-class, on a par with Arizona State or UCLA or any of the hottie mills of the SEC. If you can actually focus on your studies enough to get handed a diploma after four years, I don't care if it's in music appreciation or video gaming, you're a better man than I am. Either that, or a eunuch.

And by way of apology for the lateness of this post, here's ten more things I learned this past week:

· The Pacific Ocean is like the penguin habitat at the San Diego Zoo: Real nice to look at, not actually any fun to swim in.

· There is no human malady that In-N-Out Burger can't cure. None that I've ever experienced, anyway. Well, maybe herpes.

· Hottest cocktail waitresses in Vegas: Mandalay Bay. Though we never did peek inside the Hooters Casino, and I was kind of disappointed that we didn't.

· Mandalay also boasts the strongest drinks, and has the best bar: Red Square, a Soviet-themed vodka bar featuring more than 200 different kinds of vodka from all over the world. There's even a private ice bar if you want to sample the really high-end stuff, and they give you a fur coat to wear when you go in there.

· Biggest boobs: Hard Rock Casino, a nonstop silicone valley on the part of cocktail waitresses and guests alike that will either turn you on or turn you off breasts forever, depending on your personal preferences. (In another paradox, it's also home to either the best- or worst-named restaurant in America, a Mexican restaurant called the Pink Taco.)

· Nicest blackjack dealers: Luxor. I didn't actually gamble that much, more out of fear than anything else, but I did settle into a nice comfort zone late Saturday night (er, early Sunday morning) at a table with Orson Swindle, Holly, and Peter Bean. It's perfectly fine to ask dealers for advice, too; the casino may not want you to win any money, but the individual dealers do, since the more you rake in, the more of a tip they're likely to get.

· That said, the very instant the words "Hmm, maybe I should quit now" pop into your head, fucking quit.

· Keep track of your jacket or any accessories you might be wearing just as you would your wallet.

· Try not to leave Vegas on a Sunday if you can avoid it. The traffic streaming out of there on Sundays is almost as bad as anything I experienced in Los Angeles the preceding week.

· Legoland is every bit as awesome as you'd think it would be. (Pictures definitely to come.)

And with that not-so-random ten out of the way, here's the Random Ten:

Feel free to throw your own Random Tens in the comments, and talk amongst yourselves . . . I'm gonna go dry out my liver for a few days.
Posted by Astronaut Mike Dexter at 8:56 AM

He's leaving out the part where he had so many hooker trading cards they wouldn't fit in his pockets and he made me carry them around in my purse.

I agree that Legoland is an awesome place. I was at Legoland in Billund, Denmark in 2001 at the age of 24, and I totally did not care that I seemed to be one of the only people not there with a kid. One of my favorite memories is when I was examining a Lego stadium with a retractable roof (set up to look like a concert was going on inside) when a guy dressed like a pirate came up to me and made me talk to the Lego parrot sitting on his shoulder.

We’ve all grown accustomed to what a Hooters waitress looks like. Unfortunately, this standard does not exist in Vegas.
You missed absolutely nothing by not going into the Hooters Casino. In fact, consider yourself blessed. I can’t even drive past a Hooters without crying anymore.

Also, I hope you ate at the Pink Taco. It’s gooooood, with an excellent tequila list.

Sounds like a good time... i also enjoyed the drinks at Mandalay Bay, although I think the drinks might have been stronger at the MGM, which is where I gamble most of the time because of that and because I stay in the Signature.

I don't know if you're a coaster fan or not, but it's definitely worth it to ride the one at NY NY... it's so cool seeing the city skyline while looping around at 65mph. Also, the blackjack dealers there were awesoem to us. And by awesome I mean that was the only casino where we left with a lot more money than we came in with.

You've inspired me. I gotta go to Vegas now. Like right now.

You can Karaoke in my bar anytime!!

But how did the "engagement" go? Did you "propose" (in Legoland, I guess)? How big was the ring?