A memo from the desk of Arnold T. Pants, Esq.:
Stray bassetblogging, wheezing newspapers, and something even dumber than a Segway.

Sorry about the sparse posting over the last few days, folks -- work's gotten crazy, I've got a freelance job for the Roll Bama Roll fellows, I'm getting ready for an out-of-town trip this Friday, and oh yeah, I've been trying to find a home for a dog that I spotted wandering up the shoulder of I-20/59 on Saturday, a few miles up from the Mercedes-Benz plant. This is the dog we've unofficially christened "Greta": 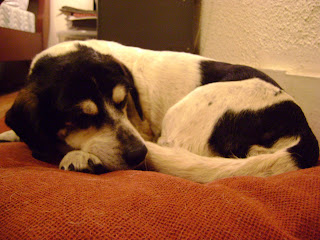 I think I may be close to finding someone who's interested in taking her -- a few someones, actually -- but in the off chance that you've ever seen this dog before or might know whom she belongs to, shoot me an e-mail. But one way or the other, we're gonna find the ol' girl a home.

And I'm sure it can't be a moment too soon for her or for my two overactive Bostons, both of whom have been completely befuddled by her presence the last few days. Not that they're not getting along or anything, but the situation has rendered Champ even more neurotic than usual -- every time he looks up at me, I imagine Kevin from "The Office" stage-whispering, "There's ANOTHER DOG in this house, I just thought you should know."

Other links for you to peruse while I try to get this all sorted out:

· Dave from Maize n Brew put together a rather incisive post about the hastening demise of the daily newspaper and what this means for blogs. As a former newspaper writer myself -- not that I have any burning desire to get back into that racket, mind you -- I appreciate his cautioning that the crumbling newspaper industry is not something bloggers should necessarily be celebrating no matter how incensed they get at the opinion columnists or sportswriters who make their forehead veins bulge out on a regular basis. Check it out; it's a good read.

· And it's not like newspaper hacks are the only annoying ones out there, either, because even if all the newspapers go bankrupt, we'll still have knee-jerking drama queens from the major TV networks trying to force artificially constructed narratives down our throats. Granted, I was tired yesterday evening, tired enough to fall asleep before halftime of the NCAA basketball final, but I could swear I remember hearing at least two guys in CBS's pregame show talk about how supremely talented North Carolina was but pick Michigan State anyway based solely on the overwhelming majority of State fans in the stands and the whole "They're doin' it for Detroit!!!111!!" angle. Is that all it takes to get an analyst job on TV these days -- the ability to completely throw out established evidence like "facts" and "statistics" in favor of barely relevant intangibles? Shit, CBS, I can do that, and I'll bet I can do it for a lot cheaper than Jim Nantz. (In case you were curious, my barely relevant intangible was that I could never root for UNC because I applied to go to college there and they said no, so I can never root for them in anything, ever, therefore I picked State, but I guess it's all academic now.)

· If this is what GM thinks is gonna save them from the gaping, razor-toothed maw of bankruptcy, then I don't think a Sparty win in the basketball championship would have saved them anyhow: 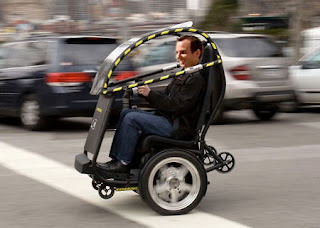 I mean, a Segway is basically a little personal-transportation module for people who are too lazy to walk; this looks like a Segway for people who are too lazy to stand up while they drive it. (And to think some people laughed at the starship scenes from "Wall-E" with the fat, lazy humans wallowing in their floating easy chairs.) Man, I'm glad I unloaded my GM stock when I did.

· Finished reading Douglas Coupland's Microserfs the other night for probably the 10th or 12th time. Go out and read that if you haven't.

· And finally, I shouldn't have laughed, but I did.

(Hat tip: Andy Sullivan.) By the way: Seth Rogen's "Observe and Report" comes out on Friday, and looks to be freaking hilarious. Let's all do out part to make sure it has a bigger opening weekend than fricking "Paul Blart: Mall Cop," shall we?
Posted by Astronaut Mike Dexter at 2:08 PM

Email ThisBlogThis!Share to TwitterShare to FacebookShare to Pinterest
Labels: blogs that are better than mine, books, embedded video, my sordid personal affairs, stupidity, teh ghey

I heard about the "PUMA" thing this morning on NPR (Personal Utility Mobility and Accesability?!?! Really?!)

And I'm mad at you for the lack of G-Day activities.

Uh, is that Gob's head Photoshopped on that pseudo-Segway? Or an actual scene from "Arrested Development" that I don't remember?

Oh, and I just ordered "Atlas Shrugged" from Amazon today. Never read it before. I'll be back with my review when I finish it in 17 years.

I apologize to you (and everyone else who might've been interested) for the lack of a G-Day tailgate . . . the response was next to nonexistent this year. I figured there'd be at least a little interest in seeing the Ginger Equalizer take the reins of the offense for the first time, but maybe not.

And Josh, I don't think I can wait that long for your review -- maybe you can just write a review of the first hundred pages a few weeks from now, by which point you'll have tossed the book on the floor and said "There's no way I can tolerate a thousand pages of this."