Thoughts on the draft. 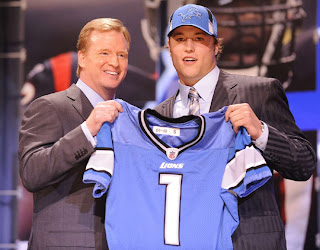 Soon to be makin' it rain in Motown on the regular.

· I realize I'm only repeating a point I made over at Dr. Saturday last week, but as bad a situation as it looks like Matt Stafford might be stepping into in Detroit, it really could be a lot worse. Think of what a luxury it is, in a way, to be taking the reins of a team that just went 0-16. If the Lions win four games in 2009, it's an improvement; if they somehow so much as break even at 8-8, Stafford instantly becomes a local legend. I'd be a lot happier for him if the Lions had bothered to draft even a single offensive lineman, but you can't have everything, I guess.

· I'd also be a little more jazzed for Knowshon's prospects if he were joining the Broncos under the Mike Shanahan regime, in which Shanahan's RB system was so magical he could practically pluck fans out of the stands and set them on track to notch thousand-yard seasons, but Knowshon is still poised to make a pretty immediate impact given that a) the Broncos backfield was a virtual M*A*S*H unit last year and b) Kyle Orton's not going to be taking any games over on his own, not yet, anyway. Either way, with Knowshon joining both of the Bailey brothers in the Mile High City, I think I've got a new favorite AFC team. 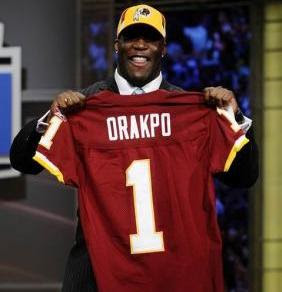 The last thing Tony Romo will see before he falls asleep for the next six months.

· As for my favorite team period, the Redskins only had six total draft picks (one of them a compensatory selection) due to Danny Snyder's ongoing inability to restrain himself from trading draft picks for the first shiny thing somebody dangles in front of his face. Still, we didn't do too badly, and our first-rounder, Texas quarterback-killer Brian Orakpo, is a monster. I'm looking forward to a great many opponent O-lines soiling themselves upon seeing Orakpo and Albert Haynesworth lining up side-by-side this season. Downside: The 'Skins didn't shore up their offensive line either, but I'm sure there will be at least one elite-level OL entering free agency next year for Snyder to throw buckets of cash at.

· The Falcons didn't have a lot of eye-grabbing, name-brand picks after the first couple rounds, but they filled needs with a bunch of potential sleeper picks. Their first-rounder, defensive tackle Peria Jerry, is a guy I remember notching approximately 137 tackles (admittedly, this is just a guesstimate based on my own recollections) when Ole Miss played Georgia in Athens a couple years ago; I'm also excited about their fourth-rounder, Richmond defensive end Lawrence Sidbury, who will get a chance to line up alongside Jerry from time to time and go hunting for QBs.

· Which team would you rather be a fan of right now: Detroit, who just went 0-16 but got to draft Stafford, or the Oakland Raiders, who just went 5-11 but continue to draft players based solely on their 40 times? It's only a matter of time before Al Davis directs his team to draft a frisbee-catching dog. 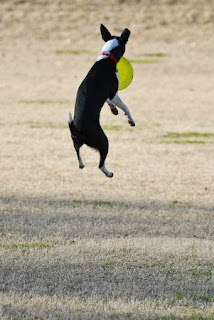 Undersized, yes, but quick and elusive; kind of a reach for the first round, though.

· Didn't follow the Arizona Wildcats much last season, so I don't know quite what to make of this comment . . .

"I couldn't be happier than to be picked by the Jacksonville Jaguars, but I was [ticked] off,'' Britton said, of going in the second round. "There isn't a better organization that I could have asked for, but every team that passed on me will regret it for the rest of the history of their franchise. I was always told I wasn't big enough, fast enough to play. Well, the chip [on my shoulder] just got a little bigger and somebody's going to pay.''

Britton didn't mince words about his goals in the NFL. "I want to lead the Jacksonville Jaguars to the Super Bowl and I want to become the greatest tackle in the history of the NFL,'' he said.

And then, as if that wasn't enough, Britton put the likes of Mel Kiper Jr. and his ilk on notice.

"You know what, if one of these draft guys lined up across from me, they'd be dead, so that's not something I'm really concerned with,'' Britton said. "If you want to line up across from Eben Britton, you're going to know what's happening to you, I guarantee that.''

Hasn't even formally signed a contract yet and he's already referring to himself in the third person? Easy there, tiger. Maybe you should actually block somebody in an NFL game before you go all Rickey Henderson on us.

· Final tally for the Dawgs: five players taken, three of those in the first two rounds (and Mohamed Massaquoi should get a chance to compete pretty early on in Cleveland, given what the rest of their WR corps looks like); four more signed free-agent contracts, including Dannell Ellerbe (who I couldn't believe didn't get drafted) with Baltimore and Brannan Southerland with the Jets. Good luck, guys.

ADDED: Best comment I've read on the draft (this draft or any NFL draft, for that matter) is at this Dr. Saturday post -- specifically, scroll down to "Greg S" at #21:

What can I say? The man knows his NFL teams.
Posted by Astronaut Mike Dexter at 7:43 AM