The electorate who wasn't there. 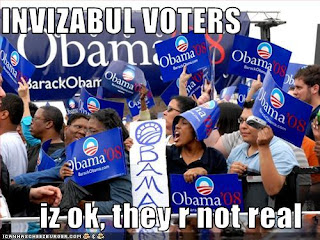 I don't know if this qualifies as a Freudian slip per se on the part of National Review columnist Byron York, but it's pretty telling nonetheless:

On his 100th day in office, Barack Obama enjoys high job approval ratings, no matter what poll you consult. But if a new survey by the New York Times is accurate, the president and some of his policies are significantly less popular with white Americans than with black Americans, and his sky-high ratings among African-Americans make some of his positions appear a bit more popular overall than they actually are.

Than they actually are. What, pray tell, could that mean? I mean, if African-Americans are people, and those people have opinions, then presumably their opinions matter just as much as everyone else's. But according to York, Obama's actual popularity, his white-people popularity, is actually a bit lower, and those black people -- who are invisible, or holograms, or are maybe just figments of the imagination of some all-powerful being, perhaps Oprah -- are just artificially pumping his numbers up with their non-actual approval.

You hear this from time to time, not just from conservative commentators but also from people in the media who should know better -- the whole "Well, if you take out the black vote" argument, as if black folks were somehow less than human and there's some alternate Earth where black people don't exist, McCain got elected, Bill Clinton never got any higher than governor of Arkansas, and everything is way better than it is here. Unless one of them finds a way to open an interdimensional portal to this alternate reality, though, all of these discussions about taking out the black vote from this thing or that thing seem kind of pointless. They're humans, they're American citizens, they vote just like the rest of us . . . why don't you ever hear anyone say stuff like "Well, Sharpton would've wrecked shop in the 2004 election if it weren't for all those white voters"?

Maybe what we need is a compromise, so that we count the black voters but not to the extent that they can all rush in and skew things the wrong way. What if their votes in elections and polls and whatnot only counted 3/5 worth? Would that make Byron York feel better?

You're treading in dangerous waters with a post about race and politics, but I'll try to put in my two cents.

First off, I agree that those types of comments are completely ignorant. But, I'll try to put my useless Poli Sci degree to some use here. Overall, African Americans don't vote at the same rate as Whites. The African American turnout was significantly higher in the 2008 election, most likely because African Americans felt inspired to vote for Obama. In a race like the 2010 Congressional election, with Obama not on the top of the ticket, it is reasonable to assume that voting patterns will return to the historical rate. So if a talking head was speaking about a US Senator, (maybe Arlen Specter) it is within reason to discount the African American vote by assuming that the turnout will not be as high in 2010 as it was in 2008.

I think you're probably right that there is some thinly veiled racism (and at the very least ignorance) concerning these types of comments, but there is a factual basis for making the assumption.

Here's what I think they mean: "Black voters only vote for black politicians or support black politicians' policies because both sides are black. White voters are so much smarter and less race-conscious that they are above such considerations."

In a way, I think this makes the comments uglier and perhaps more racist than they seem at first blush.

I don't even see a THINLY veiled racism here.

Look, like it or not, some people approve of politicians for reasons that are irrelevant to the actual value of the politician's service. Some, for instance, base their approval of a politician solely on his or her position on a single hot-button issue. My mother, for instance, approves whole-heartedly of a president's performance if he's anti-abortion ... and disapproves otherwise.

I know you liberals often hate to admit that some stereotypes are actually grounded in fact, but it's a fact nonetheless: many African-American voters express unbridled approval of Barack Obama despite having little (if any) knowledge of what he's actually DONE since becoming president. He's black, so they approve. (Just like: He's black, so rednecks disapprove. Or he's pro-choice, so my mother disapproves.)

You liberals are a whiny, over-reactive bunch.

Jim, saying someone's sample isn't representative (which is probably the argument regarding the Fox News polls) is a fair argument against putting too much stock in the results. But York isn't complaining that the poll included a disproportionate number of blacks and thus skewed the results; he's saying that the overall results are suspect because the results among various groups are wildly different. That's not a good argument. 60% overall is still 60% overall, whether it comes from 100% of blacks and 54% of the rest of the nation or 60% flat across all groups. (All numbers pulled out of the air.) The splits are instructive in different ways, of course, but to say that those splits invalidate the overall number - not just alter how it should be interpreted, but changing the actual number (which is exactly what York's comment suggests) - is totally insane.

How you can read that passage and not get the impression that it's a subtle way to say that the black vote somehow doesn't count when looking at these approval numbers is beyond me. That may not have been his intent, but if you actually think about what he said it's hard to divine any other meaning.

If you're looking at the overall numbers, that by definition includes everyone. You can't take out the black vote and say "see, he's less popular overall than you think" any more than you can take out the fundamentalist vote and say the opposite. To do so smacks of bigotry of one stripe or another, because it is an insinuation that somehow that group you took out doesn't count in the overall picture.

Unbridled?... cause we're horses and all.

SpartanDan, you're right on.

"...some stereotypes are grounded in fact..." The point here, Jim, is not about stereotypes (although I'm sure we could come up with some about your social position that you'd be unhappy with). The point is that some social groups are consistently marginalized in public discourse. As Doug notes, when was the last time we heard someone say "Well, if we take out the white, upper middle-class, straight, male vote out, so-and-so would have run away with the election"? Instead, all we hear about is the Hispanic, black, woman, youth, etc. vote "skewing" the "real" results.

My response to Jim - exactly what SpartanDan said.

As I was reading that I was thinking how you could rephrase this with a liberal slant as "Obama has a historically high approval rating... the highest ever, in fact, that is if you take away the caucasian vote."

Hell. Take the Palinites out of the Republican camp and what is left?

In the long run, it doesn't matter much: There is no real excuse for Byron York to use the phrase he uses, but only a fool thinks that there has never been some underlying bias. What will count is what Obama does. And so far, he is doing fine. It's a little early to say "great", but I am completely optimistic. Results matter. Bad results have stained a good ol' white boy from Texas, and pretty much ruined his party. Good results will also make a difference. The biggest bigot in Bama loved the blacks that played winning ball for The Bear, and his successors, so if Obama continues to deliver we will might grow past all this. After all, the bias is hundreds of years old; it is going to take more than 100 days to solve it.

I think what they are trying to say is that only the opinion of white people is important.

The most interesting thing about identity politics to me is that white males are incapable of engaging in them. Funny how that works.

Jim says black people resoundingly approve of the job Barack Obama "despite having little (if any) knowledge of what he's actually DONE since becoming president." Hey Jim- is this information you gleaned from an informal poll of all the black folk you know, or do you have statistical evidence of this, or is this just something you just KNOW IN YOUR GUT 'cuz you know just how the coloreds think?

As for Byron York, Sadly, No! hits the nail on the head (as usual):
http://www.sadlyno.com/archives/20517.html

Shorter Byron York:
If I ignore the fact that black people really like Obama, I can make a case that he hasn’t been a very popular president so far. And hey, if I just kick it old skewl and restrict Obama’s popularity ratings to those of white male property owners, then I can make the case that… what, why are you all looking at me like that?

Doug....I think you would like to know that he posted a response article to being called racist:

Apparently, he still doesn't get why what he said is completely racist.

The semantics depend on the survey methodology.

If the survey was as simple as "Do you approve or disapprove?" then his comment doesn't make sense. The results would just show the proportion of those surveyed that expressed approval. If, however, it is scale-based (on a scale of 1 to 5 or strongly disapprove to strongly approve, how would you rank your approval of Obama), then the over-exuberance of a subset of those surveyed could create a statistical error in either direction.

If one person disapproves, three people are indifferent, and three people strongly approve, then the average results would indicate that country approves overwhelmingly. But, in reality, 4 out of 7 - the majority - do not approve. So, the overall approval rating is not representative of the actual responses.

I'm not saying that this is how this survey went, or that his comments were going in this direction, but it's possible.

Furthermore, "strongly approving" of the president's performance isn't "over-exuberance" as far as a survey is concerned. It's just data.

As long as the poll is demographically balanced on ethnic lines according to the population, the results show the popularity of Obama's positions as they actually are. One could argue that blacks are biased towards Obama and I'd agree. But, it is quite likely that an equal number of non-blacks are biased against Obama, evening out that bias.

At best, a silly assertion by York.

I was always of the opinion that lighter skinned blacks were always smarter than their darker skinned counterparts.-SNL 82