MGoBlog founder Brian Cook has once again invited me to push the pram a lot sully the reputation of his great creation, the BlogPoll, by hosting a roundtable. This time around, we haven't even played any games yet, so everyone else is flying just as blind as I am. We'll see if that makes a difference.

1. In his "visiting lecturers" series posted on Every Day Should Be Saturday over the past few months, Orson Swindle asked each participant to explain which country, during which historical period, their team most resembles. Let's bring everything up to the present day and ponder: Which current sovereign nation is your team? Or to look at it another way, how does your team fit into the "world" of college football?

Ironically enough, Georgia right now is the Russia of college football. We were fearsome in the '60s, '70s, and much of the '80s; kind of dropped off the map in the late eighties; have begun making noises about returning to superpower status over the last few years, and now we're kicking this bitch into overdrive. First we went out of our way to tweak our long-time arch-rival in as blatant a manner as possible, then we further threw our weight around by kind of arbitrarily bitch-slapping a much weaker country that had made noise about becoming one of the big boys but it turned out was never anywhere close to our league at all. And our fearless leader is a poker-faced genius who seems like a nice, reasonable guy at first but deep down is a diabolical hardass of the highest order.

With (the University of) Georgia just as with Russia, though, that return to superpower status is easier said than done. We've made headlines all over the place the last few weeks, and whatever else you can say about us, we're not flying under the radar anymore. And while beating down the Colt Brennans or Mikhail Saakashvilis of the world was a cakewalk, it's only going to get a lot tougher from here. For that reason, plenty of people are thinking we're not ready for The Show just yet, as we might only be one critical injury or monetary crisis away from collapse.

Incidentally, now is a perfect time to present an idea I think we should take a long hard look at this year for a must-win home game: Maybe this is just my bizarre morbid fascination with Communist iconography talking, but the week leading up to, say, the Tennessee game this year, I think we should royally fuck with the Vols' heads by transforming Athens into a simulacrum of Moscow circa 1980. I'm talking three-story-high banners of Mark Richt's visage hanging from buildings all over campus, a parade featuring the football team marching in front of a line of tanks, and a reviewing stand in College Square where Damon Evans can wave imperiously to the crowd. It might ruffle some feathers, but technically I don't think the NCAA could stop us. 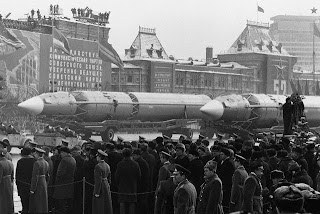 If you thought the end-zone celebration ruffled some feathers . . .

2. Every preseason roundup has to have some discussion of who's overrated, but let's go beyond that. Which team do you think is poised to crap the bed in the biggest way this season relative to high expectations, and which game do you think will begin their slide into ignominy?

This is the easy answer, of course, and certainly I've already spent plenty of time bagging on Clemson's title chances this season, but the more I think about it, the more I think this is how the season goes for Tommy Bowden's team: They beat Alabama in the Georgia Dome on August 30 in an ugly game, but people manage to forget about that lackluster win as the Tigers dispatch their next four opponents (N.C. State, Maryland, and two D-IAA snack cakes) fairly easily. Then it all comes crashing down on October 9, when the 5-0, 5th- or 6th-ranked Tigers go to Winston-Salem and get dropped by the Demon Deacons. They recover by pummeling Georgia Tech the following week, but drop at least another two out of their season-ending five-game stretch (at Boston College, at FSU, Duke, at Virginia, and South Carolina). 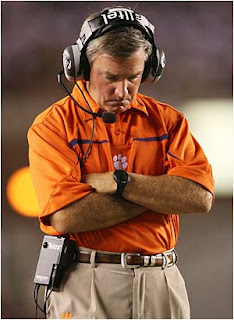 Why? Because I just don't have confidence in Tommy Bowden's ability to lead his team in the face of huge expectations. And I realize that's a dangerous thing for me to be saying as a Georgia fan, and there was even a part of me that considered going the traitor contrarian route and putting Georgia in this spot, but there's a big difference between Mark Richt and Tommy Bowden: Richt has clearly evolved as a coach during his seven-plus years in Athens, while Bowden's teams are still making the same kinds of mistakes -- and incurring the same kinds of head-slapping losses -- that they did in his first few seasons. Yes, Georgia will have numerous opportunities to take the pipe in tremendously high-profile fashion this year, but it's more likely to happen against a no-shame superpower opponent like Florida or LSU. With Clemson, I'm not 100-percent sure it won't happen against a team like Maryland.

3. On the flip side of that coin, which team do you think is going to burst out of nowhere to become 2008's biggest overachiever -- this year's version of Kansas '07, as it were -- and what's going to be the big upset that makes us all finally sit up and take notice of them?

Well, based on the last question, Wake Forest is a logical choice here. But I can also see Utah coming from a comparatively under-the-radar position (given that they have to share oxygen in their own conference with BYU, everyone's Most Likely to Break Into the BCS anointee this year) to surprise some folks, and it could start early with a road upset over Michigan in week 1. That wouldn't necessarily be a huge upset, given that a) we already know Michigan's going to struggle this year and b) a season-opening upset in Ann Arbor is anything but unprecedented. But anytime a mid-major can go into the Big House and come away with a victory, that's kind of a big deal, and in the Utes' case it'd be enough to set them up for a big run through their next four games, which in turn would give them some strong momentum headed into a Thursday-night challenge at home versus Oregon State on October 2. 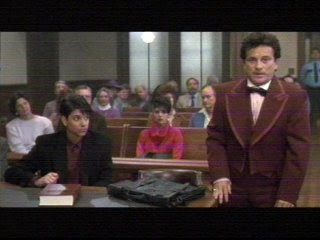 Joe Pesci, as Vincent "Vinny" Gambini, joins me in praising the Utes.

4. Here's an "I'll hang up and listen" question. I put Ohio State and Oklahoma #1 and #2, respectively, despite their recent high-profile BCS face-plants. Where did you rank those two teams, and did those BCS issues have anything to do with it?

My rationale for putting the Buckeyes and Sooners 1-2, of course, is here.

5. Last season was a statistical outlier in countless ways, not the least of which was the fact that we ended up with a two-loss team as national champion. Do you think anyone plays a strong enough schedule to get MNC consideration as a two-loss team this year? Conversely, do you see anybody managing to sail into the national-championship game undefeated? 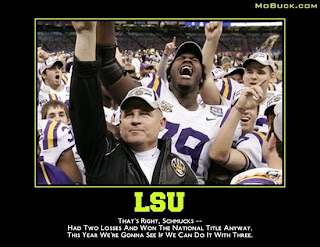 Very few teams look bulletproof to me this year, so I can see several conferences advancing two-loss champions into the BCS. But I think we'll still end up with enough one-loss teams that anyone with two losses will still be on the outside looking in come December 7. The most likely national-title pairing, I think, is 12-0 Ohio State versus a one-loss team from the SEC (the sound you just heard was Buckeye Nation's collective cerebral cortex shorting out as they try to decide whether to jump for joy or wet themselves with anxiety over that). The Buckeyes do have that huge matchup with Southern Cal on their schedule, for which the ESPN hype machine has been busy cranking out new adjectives for seven months now, but once they get through that -- and I think they'll do so with a W -- I think they'll crush the rest of their Big 10 schedule.

6. OK, time for some Olympic fever. Which athlete from the Beijing Olympics -- any sport, any country, with the exception of USA basketball since those guys are already pros -- would you most want to add to your team's roster this season? No worries about age, eligibility, or even gender; we'll worry about that crap later.

My opinion is probably already well known that any association with Alicia Sacramone can only be a good thing, and her speed and agility could add yet another dimension to an already deep RB corps, but it's not like we're hurting for talent there at the moment. What we really need is a sure-fire replacement for Trinton Sturdivant at left tackle, and I think I have just the guy: Guam flag-carrier Ricardo Blas Jr., who at 6'0" and 399 pounds, may be the heaviest athlete ever to have competed in the Summer Olympics. But get this: He competes in judo. So not only is he as big as a house, he's got moves. If anyone gets close to laying a finger on Stafford, this guy could just kick the crap out of 'em. 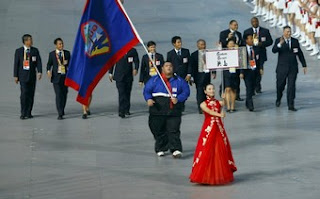 He's the one in front. No, not that one.

Drop a note in the comments with a link to your responses, BlogPoll voters, and there'll be a roundup here about this time next week.
Posted by Astronaut Mike Dexter at 7:43 AM

Olympic Athlete we could steal? How about either Usain "Lightning" Bolt (guy is 6'5" and STILL destroyed his own world record in the 100m), or Resse Hoffa the shotputter who already trains at UGA. He could help out the OL.

Great questions by you and sub-par answers by me.

Buckeye Commentary is pretending to know what they are talking about here:

Thanks for being such a gracious host, Doug. I think I may have spilled some boxed wine on the couch.

Here are the answers that come From Old Virginia.

BTW, do you respond to e-mails?

Excellent questions, sir. And I didn't even see #6, which I'll have to add to my answers, which are posted here at BON.

My Opinion on Sports checking in. Thanks for hosting!

cocknfire: Yes, I do respond to e-mails (even though it evidently takes me four or five days to respond to blog comments. Sorry, I've really been letting shit slide lately.)