So what do you do when you're in a condo at the beach and it's been pouring down rain for two days? Well, if you're me, and the two days have been recently, you watch the Olympics. A lot of them. I now know, in principle at least, how Greco-Roman wrestling is scored and judged, so if that ever comes up on Jeopardy!, well, that's another few hundred bucks for me, I guess. Anyway, halfway through the 2008 games, here are the Five Things I Like Best About This Year's Olympics So Far: 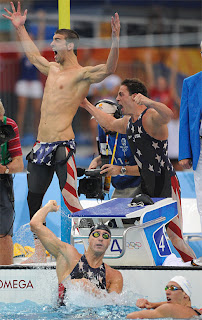 Michael Phelps kicking ass
A few people, my mom included, have complained to varying degrees about the attention that's being showered upon Phelps this summer as he tries for eight gold medals in a single Olympics. And while the media hype might be a wee bit excessive, I would counter that a) winning more gold medals than anyone in history is still a pretty big deal, and b) if someone has to be getting this attention, I'd much rather it be a genuinely good kid like Phelps who's a team player, works his ass off and only gets attention for a few months every four years than some douchelick like Kobe Bryant who pulls down nearly $20 million a year and still finds stuff to whine and complain about and who gets thousand-word columns written about him if he so much as farts after a big meal. So anyway, good luck, Phelps. And to your teammates, one of whom in particular was primarily responsible for . . . 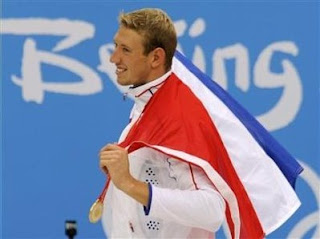 That French swimmer getting punked in the relay
Alain Bernard, above, is the French swimmer who confidently stated before the Olympics started that the French relay team would "smash" their American counterparts in the 4x100. He's also the guy who, handed a big lead in the last leg of said relay, got smoked by American swimmer Jason Lezak on his way to settling for a silver medal while Team USA picked up the gold. A more perfect karmic outcome you could not have possibly scripted -- other than, perhaps, Team France tying Team Germany for first place, only to have the French Olympic Committee immediately drop all appeals and surrender the gold to the Germans. Let that be a lesson to you, Frenchy. 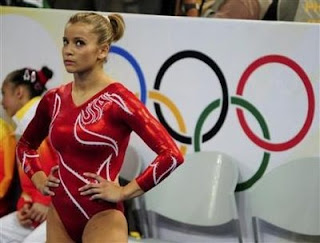 Alicia Sacramone
OK, so she fell on her ass in the floor exercise during the team all-around competition. But it was such a . . . nice ass. We were all thinking it, I just said it, OK? I mean, all things considered, you have to fall on an ass, that's the one you want to be falling on. And the fact that the judges evidently didn't take that into account leads me to wonder if they really were against Team USA all along. Whose side are they on, anyway?

China getting called out for letting that one little girl lip-sync to that other little girl's singing
No offense to my readers in China, but -- wait, what am I saying? There's no way this blog would make it past the Internet censors in China. So I can say without fear of offending any native Chinese people that China is one seriously messed-up country. No, let me walk that back a bit -- they have one seriously messed-up government. These people are going to micromanage the opening ceremonies to the point of shoving 7-year old Yang Peiyi (left) into the shadows so that the supposedly cuter 9-year-old Lin Miaoke (right) could lip-sync to her rendition of the Chinese national anthem? I mean, we are one shallow-ass country here in the U.S. and A., but even we'd never tell a 7-year-old girl her grill is too fucked up for her to sing "The Star-Spangled Banner." Anyway, as traumatic as I'm sure this must have been, I'm glad for the rest of the world's sake it was brought to light. And I think George W. Bush could probably raise his approval rating five points by offering Miss Peiyi and her family no-strings-attached asylum in the United States. "Come to America," he'd say, "where you succeed based on your talent rather than on your physical appearance. Well, most of the time. There's always the occasional exception *coughHeidiMontagcough*." 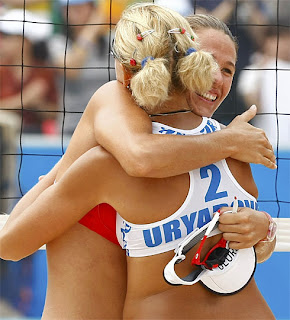 People from different countries not killing each other
OK, so there was that unfortunate incident when some random crazy Chinese guy stabbed an American to death in Beijing. But other than that, there haven't been any Russians killing Georgians, Americans killing Iranians, Palestinians killing Israelis, Pakistanis killing Indians, or vice versa to any of those. That, I think, is my favorite thing about the Olympics: People are too busy competing at sports to worry about wanting to blow each other up. I don't know if that's what people mean when they talk about the "Olympic spirit," but it's probably not the worst thing anyone could come up with.

Wow, I feel like everything's right with the world right now. Well, for the next 15 minutes or so, at least. Anyway, here's the iTunes-selected, beach-approved Random Ten:

Your turn -- the stuff you've loved (or hated) about the Olympics so far, and your Random Tens, in the comments.
Posted by Astronaut Mike Dexter at 8:25 AM

It turns out that I like watching judo. I don't know why, but women's judo has fascinated me.

Speaking of great asses, have you SEEN beach volleyball???

I am kind of disappointed that the Americans have allowed a run in Softball.

Phelps is amazing, and it is a further testament to the fucked-up-ness of China that they would not let Mark Spitz come to watch Phelps break his record.

Ten:
1. "Damien" by Iced Earth
2. "Happiness is a Warm Gun" by The Beatles
3. "All Along the Watchtower" by Jimi Hendrix
4. "Death" by Judas Priest
5. "West End Girls" by Pet Shop Boys
6. "Tweeter and the Monkeyman" by Traveling Wilburys
7. "People are Strange" by Echo and the Bunnymen
8. "My Name is Bocephus" by Hank Williams, Jr.
9. "The American Way" by Sacred Reich
10. "Songs from the Wood" by Jethro Tull

Dido the Beach Volleyball comment above. Those guy's must work out.

I have found a new respect for Badmiton. Not only does it provide grade school giggles every time the word Shuttlecock is mentioned, but it is a seriously intense sport. And apparently Bill Gates is a fan.

Team Handball is also a new fav. I haven't figured out the rules quite yet, but it reminds me of Baseketball; some sort of made up playground game that got legitimized. Fun to watch though.

Americans totally dominating in the swimming pool is my favorite

Agreed on all counts with Alicia Sacramone doing the most for me. I always have to root for the figure skater or gymnast that has a good rack. Katarina Witt still enters my dreams.

The whole idea that a 14 year old has an advantage over a 16 year old makes my head spin.

My favorite thing? Swimming and the green line that indicates the world record. I hope they are doing something like that with track.

My heart belongs to Nastia Liukin, the first Olympic gold medalist named after an MST3K character. (OK, shares a name with, but whatevs, I'll take it.)

I'm prepping for a showcase this weekend, so you get rappers and show times. Suck it, haters.

I know it's wrong, but I just want to call her Nasty Lookin'. Glad she won, though; I thought they were going to home cook her out of it there for a minute.