The Friday (Semi-)Random Ten wants its MTV, its Nintendo, and its Ford Taurus station wagon. 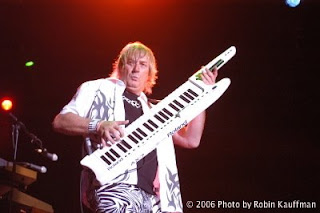 I was walking home for lunch yesterday and a weird thought occurred to me out of the blue: Whatever happened to the keytar -- you know, the keyboard designed to be worn on a strap hung around the neck and played like an electric guitar? You hardly ever see anyone playing an honest-to-goodness keytar lately -- I can't remember having seen once since, like, 1989. And yet it's made a weird sort of postmodern comeback with Guitar Hero. I mean, if you really think about it, that's what you're playing.

But that's just one of the aspects of the 1980s I've been feeling unaccountably nostalgic about lately. The '80s spanned ages 1 to 11 for me, which you'd think would be too young to have much of an effect, but I still consider that decade to have had as much of a formative effect on my personality and cultural tastes as any other decade, if not more. And there's a lot I wouldn't mind bringing back, even now. So that's why this week's +5 is Five Things I Miss About the '80s. 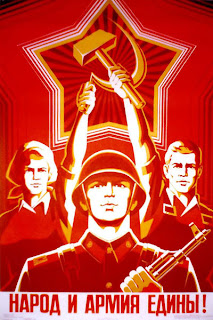 The Cold War
This probably doesn't reflect well on me, but when Russia began their ongoing beatdown of the former Soviet republic of Georgia earlier this month, a part of me felt . . . relieved. You know, that we might finally be getting back to a situation where we've got a unified, flag-carrying monolith of a superpower for a sworn enemy rather than these ragtag, stateless, cave-dwelling, suicide-bombing terrorists we've been fucking around with for the past seven years. Admit it -- despite the incipient threat of mutual nuclear annihilation, the Cold War years were pretty rad: James Bond storylines were easier to come by, Slavic women were even hotter because they were taboo, and the binary nature of the US-vs.-USSR conflict made international relations a lot simpler and less mentally taxing. And since Osama bin Laden hates the Russkies every bit as much as he hates our asses, maybe we could turn one against the other, sit back, and watch the show for the next 20 years or so. 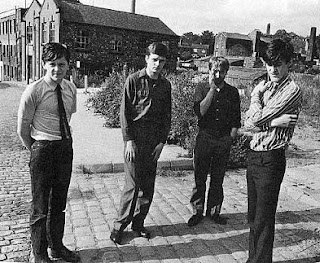 New Wave music
Eighties music wasn't all cheeseball pop (not that '80s cheeseball pop was such a terrible thing) -- there were a lot of genuinely good bands that came out of that decade. Joy Division, The Police, The Cure, The English Beat . . . if you think about it, those acts really laid the groundwork for the alternative/grunge wave that started bubbling up in the late eighties and lasted through the mid-'90s, which was pretty much the last time popular music didn't suck giant hairy donkey taints. 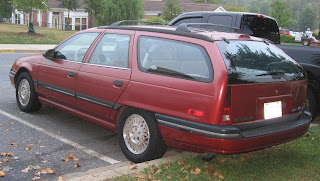 Station wagons
Back in the '80s, when minivans were just starting to get big and SUVs were still driven only by mountain dwellers and park rangers, the Gilletts always had at least one station wagon in the family. And in 1987, Mom got what was then the station-wagon state of the art: a Ford Taurus LX, which at that point was still revolutionary and was the first car we'd ever owned that had rear-facing jump seats in the cargo area, which for an eight-year old was only slightly less awesome than a space shuttle launch. Even now that SUVs have taken over (to society's detriment), you can still buy a station wagon these days, but the only people selling them are the European carmakers, which means you're probably not getting into one for less than $30,000. That said, should Alfa Romeo bring the 159 Sportwagon with them when they return to the U.S. market next year, I will scour my couch cushions for as many pennies as it takes to buy one and camp out at my nearest Alfa dealer like a "Star Wars" fanboy.

Music videos
A strange thought popped into my head yesterday: My generation is part of a dwindling cohort of people who can remember when you could actually watch music videos on television, back in those halcyon days before MTV became a reality-show network whose greatest contribution to American culture was inexplicably spinning Heidi Montag and Spencer Pratt into celebrities. (Thanks ever so much for that, mofos.) And videos back then actually told a story, rather than merely being four-minute vignettes of overpaid pop stars lip-synching and grimacing for the cameras. I'm glad YouTube is there to do the job MTV has abdicated and protect some of these true Reagan-era treasures for posterity -- seriously, you can spend hours screwing around and reliving your preteen years on there.

Primitive video games
As amazing as today's Xbox and PlayStation games are, I pick up an Xbox controller these days and I'm confronted with more buttons and knobs than I typically use in my car, and need about as long to figure out how to operate it. So there's something comforting about the up-down-left-right-A-B-start spareness of those old first-generation Nintendo controllers, as well as the 2D simplicity of the games with which we played them. They're kind of like the pot roast of video games: simple, hearty, completely unpretentious, and strangely comforting. In fact, I think my parents still have our old 8-bit Nintendo unit wrapped up somewhere . . . when the nostalgia wave hits for that particular piece of equipment, and you know it's going to one of these days, I'm gonna be surfing that sucker for all it's worth.

Your favorite things about the eighties, be they songs or anything else, are welcome in the comments.
Posted by Astronaut Mike Dexter at 7:35 AM

+1 on "Listen to the Radio" - one of my all time favorites. "Storms" is a fantastic album, if you like her stuff. (Bonus fact: it's produced by Glyn Johns!)

Tell the truth, Doug. You really miss MC Hammer, Parachute Pants and Members Only jackets. We're onto you.

Ten:
1. "Achilles: Agony and Ecstacy in Eight Parts" by Manowar
2. "Heart of Glass" by Blondie
3. "Black Sabbath" by Black Sabbath
4. "Skalds and Shadows" by Blind Guardian
5. "God's Own Drunk" by Jimmy Buffet
6. "Running up that Hill" by Kate Bush
7. "Demon Speeding" by Rob Zombie
8. "Ring of Fire" by Johnny Cash
9. "Breaking the Law" by Judas Priest
10. "Aces High" by Iron Maiden

I entered my freshman year of high school in the fall of 1980 and spent 11 June 1988 in Sanford Stadium listening to Charlayne Hunter-Gault tell us new graduates how shitty things were for her as a student (she rocks). So yeah, the '80s are pretty special to me.

I watched R.E.M. perform "So. Central Rain" on David Letterman's new late-night NBC show, and I was hooked. On both. A month later, I was at the Omni for the Police's Synchronicity tour. I've still got the T-shirt around here somewhere. A year later, I was at Legion Field for a free R.E.M. concert. About a year or two after that, I was wandering through the Tate Center one night and stumbled across a University Union-sponsored concert by some little-known English band called Love and Rockets, a moment I will remember as my true awakening to the concept of "there's so much more out there".

Levi's denim jackets (de rigueur) had large inside pockets that were practically made for the Sony Walkman.

Along with the rise of some of the great bands you listed, I remember witnessing the tragic fall into bad music of many once-greats like Heart, Yes, Jefferson Airplane/Starship, Chicago, and Genesis.

To cap off the decade (symbolically, anyway, since this happened in 1991), I won an MTV contest and was flown out to LA for a screening of Oliver Stone's The Doors and a cast party afterward at the Whisky a Go Go.

I fully expect my own random 10 to be dominated by '80s music, anyway.

I was at a wedding 2 weeks ago (where I met Vince Dooley by the way) and a band member had a keytar, not just for show. Also, I dug up my Nintendo, and it sucked. Duck Hunt wasn't as fun as I remember, and I still couldn't beat Super Mario Bros.

The Police is a horrible band.

Doug have you seen the commercial on ESPN of the guy playing the keytar with Hammer? Maybe that's how it got in your head.

Your blog now has invincibility.

In the late 80's I lost my brothers denim jacket at summer camp. He hasn't spoken to me in 20 years. Steven, if you're reading this, I said I was sorry. Jean jackets aren't even popular anymore would you stop being such a pussy about it!

I've been reading for quite a while now, but I think this is my first time posting. I'm a Michigan grad headed for the pain of Northwestern graduate school this fall, but I grew up in the Cincinnati area and appreciate the SEC / UGA coverage. The friday random 5 + 10 is one of my favorite blog features. (Okay enough of that.. too much blog praise can just get strange.)

Anyhow, regardless of what you think of Snoop, he did manage to rock a keytar in the fantastic video for Sensual Seduction / Sexual Eruption. If you haven't seen it, watch it, even if you hate hip hop. http://www.youtube.com/watch?v=QETLPcWqjcw

You brought up many things I miss... although slightly different.

Old video games: I miss the side scrollers. First person shooters with 75 buttons just don't work for me. Give me todays graphics, but a 2-D game, and I'd start gaming again.

I don't have the fond recollection of the 80's (I was born in 76) because hair metal killed it for me. I don't miss new wave, but I do miss the grunge era. Even the bands I hated in the early to mid nineties sound better than the Emo junk of today.

Finally... Station Wagons. I want a wagon, but no one seems to make them. Its like I'm stuck between an overpriced European wagon... and the Subaru Outback.

The 80's spanned ages 0-7 for me so I would like to add some badass action figures, toys, and Saturday morning cartoons to the mix (one for each of my years in the 80's)...they just don't make em like these anymore:

The '80s...wasn't Biden plagiarizing around that time?

Video games for me stop with the Super Nintendo and Sega Genesis. BUBSY 4 LIFE LAWYA!!!1