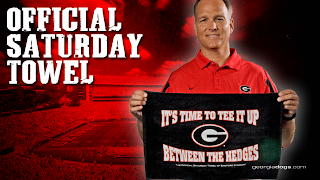 · First things first: I need tickets. Three Four of them, to be exact. I'm hoping to take my family to the Georgia-Georgia Southern game this weekend so they can see a) what will hopefully be a resounding ass-whupping to kick off Georgia's title run with a bang and b) Uga VII's coronation, so if anyone's got a trio quartet of tickets they're looking to unload, I'll be willing to go $50 apiece. In fact, if you have a whole bunch sitting around that you need to get rid of, a couple of my Tent City co-residents are hunting for them as well, so that'd make . . . six? Whatever. If you've got extra tickets, holla.

I've also got a Facebook friends who's got two Alabama-Clemson tickets ready to move for face value plus 20 percent, whatever that adds up to. If you're interested in those, you can e-mail me at the above address.

· Now then: You diehard college football fans have no doubt followed Sunday Morning Quarterback's move to the cash-money-earning promised land of Yahoo/Rivals.com with his new blog, Dr. Saturday; as of tomorrow (in theory, at least), I will be a contributor to said blog. I will be writing a weekly picks column from the point of view of a schmuck who's never actually had enough money to bet on anything, CFB-related or otherwise; if you don't read it for actual wagering advice -- and you probably shouldn't -- you can at least read it so that you can pat me on the head later and say, "That was good, honey! I'm so proud of you!" OK, maybe only my mom is going to do that. But still. Boost my ego a bit and check it out.

· Nothing I write at any point during the season, however, will be as funny as this:

Imagine showing up for work and your boss saying:

“OK (your name), what we need you to do today is to go to a college campus full of hot pussy and be good-looking on national television. Oh, and be sure to watch plenty of football, talk about plenty of football, and hang out with plenty of uber-famous football coaches. Anyway, here’s your hotel key and a few extra copies for any big busty sluts that happen to throw themselves in the general vicinity of your cock during the upcoming Thursday-Sunday time frame.”

You love you some Herbstreit. And please, no comments about the gelled hair. You aren’t fooling anyone. You’re jealous. You’d gel your pubes with hot kitchen grease if it meant taking Kirk Herbstreit’s job for 15 minutes.

Why do you think your girlfriend lets you watch College Gameday, you dense fuck? Because while you’re busy geeking out over which cartoon-animal-face Lee Corso is going to put on top of his head, she’s going for an imaginary ride on Kirk Herbsteit’s pelvis.

If I'd been drinking any milk when I read that this morning, it would've been sprayed all over my keyboard. Read the whole thing, and say a silent thank-you to my college buddy Kevin W. for having directed you to it.

· Also hilarious, "The Top 10 Chick-Repellent Items of 2008," made all the more wonderful by the comforting realization that I don't currently own any of these things. Not even a Bluetooth headset, which, I swear to you, is one day going to be looked back upon as the Members Only jacket of the 2000-aughts.

· And finally, courtesy of Blog of Hilarity, a warning that goes for this blog as well as for the University of Michigan. 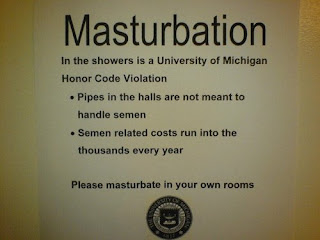 Email ThisBlogThis!Share to TwitterShare to FacebookShare to Pinterest
Labels: begging for stuff, blogs that are better than mine, football, georgia bulldogs, Mystery Meat, stupidity

If you were still in college, you would get so much pussy.

a. Are you backing these picks with real money?

b. If not then why is that pick worth anything/why should anyone care?

if so, what do you plan to do with your winnings?

i'm a big fan of the blog man. any tips for building blogging momentum? i've just started and want to get better.