I don't know how to put this, but I'm kind of a big deal. 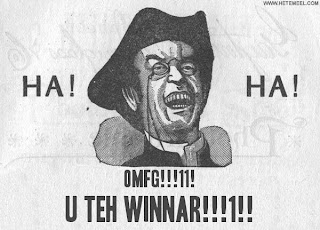 I've been doing this blog for nearly three years now and it finally pays off -- today Every Day Should Be Saturday announced that Hey Jenny Slater won the balloting for Funniest Blog in the 2007 College Football Blogger Awards (brought to you by the proprietors of Rocky Top Talk, MGoBlog, EDSBS, Burnt Orange Nation, and Dawgsports).

Before I launch into a blizzard of false humility and passive-agressive boasting, two disclaimers. First, the rules of the CFBAs hold that a single blog can't win the same award two years in a row; last year's winner was EDSBS, and taking them out of the running is basically like the Pac-10 saying Southern Cal is ineligible for the conference title. Suffice to say that if EDSBS had still been in the running for this year's Funniest Blog award, Hey Jenny Slater would've gotten beaten like a two-dollar whore, but they weren't, so we didn't. Victory!!!!1!1!1!

Secondly, I know Orson probably cringed when it came time to announce this victory, because I've been blogging on a lot of political stuff lately and I have this mental image of him sitting down at his computer early this morning going, "Great, I'm going to send everyone over to the Funniest Blog of 2007 and they're going to read a bunch of crap about relative media bias in the 2008 primary season and changing paradigms of the two major political parties' platforms vis-a-vis civil liberties. Shoot me now. Or better yet, shoot Doug." Well, what can I say -- I'm a jack of all trades (or a jagoff all trades, as it were), and one of the most challenging parts of doing this blog has been managing its two major readership constituencies: to wit, the "Go Dawgs, it's a shame you're a f&%$ing pinko" crowd and the "This would be a great political blog without all the football crap" crowd. All I can say is that I'd really love to bring you two groups together in a locked room and just leave you to your own devices for an hour or so. I see two possible outcomes: You'd either end up killing each other or tearing each other's clothes off and having the kind of mad, mindless monkey sex they can't even show on expanded cable.

(My bet, in case you were curious, is on the latter. Seriously, as someone who's defiled many a Republican in his time, I can tell you there are few things more satisfying than meeting someone whom you don't agree with on a single issue and then putting their footprints on the ceiling. I think all my readers, both the bleeding-heart terrorist-appeasing liberals and the douchebag neanderthal conservatives, should try it sometime.)

Anyways, my sincere thanks to you, the CFBA voters who recognized that this blog is pretty much all I got left and throwing me a bone with your nod for Funniest Blog; thanks as well to the CFBA overlords who put this thing together in the first place. To all of you, I promise to be funnier over the next 12 months. For real.

To all of you who don't think I'm funny, you have officially been declared wrong and can therefore suck it. But please, keep coming back.
Posted by Astronaut Mike Dexter at 1:30 PM

Email ThisBlogThis!Share to TwitterShare to FacebookShare to Pinterest
Labels: blogs that are better than mine, self-aggrandizement

Congratulations! You have brought me a chuckle or two, or dare I say, even three, over the years.

Good job Doug. Fortunately I believe I fit in both categories of your readership, so hurray for that.

I also fit into both categories.

Congrats, Doug! Much deserved. Don't forget the Friday random ten. Some of us are music fans to boot. Somebody's gotta provide the soundtrack for the MMMS...

Congrats from yet another pinko die-hard Dogs fan.

CONGRATS DOUG!!! Been reading for almost all three years, and on behalf of your entire Arkansas constituency, the award is much deserved.

Keep up the good work!

You're my favorite pinko, and I totally mean that as a compliment.

In all seriousness, keep up the good work DG.

We should have a convention.

Well, the funniest stuff is frequently the political rants, so maybe Orson was okay with it. Besides, ain't he a gator? WTF do you care?

As one of your "douchebag neanderthal conservative" readers, I'm kinda offended by the neanderthal characterization.

Doug, hard work never goes unrecognized. Well done, sir! I have been reading your blog for about 4 months now, and I am hooked. On behalf of your Missouri readership I say "thank you for SHOWING-ME a good time." HAWWWWWW!!