The Friday Random Ten+5 a) laughs and b) encourages the rest of the world to laugh with it.

If the last couple weeks have proven anything, it's that I am one funny motherf&%$er. I'm not just spinning that out of whole cloth; it's been empirically, independently proven. Perhaps as a result, I've had a few people ask me recently, "So, Doug, what do you find funny?" Some of those things you already know, but as someone who likes to laugh, there are some completely random-ass things that are guaranteed to elicit at least a chuckle from me every single time. Today I'm going to share a few of those things with you, dear readers, because the +5 this week is Five Random Things I Find Hilarious: 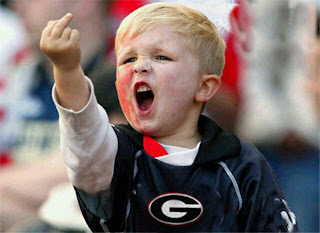 Little kids getting really, really angry
Little kids getting angry and throwing tantrums are pretty funny to me to begin with, but what's really funny is when it's a kid of a certain age, i.e. one who's just learned how to cuss but isn't old enough to really know how to do it yet. Because that's when you get constructions like "KISS MY HELL!" or "PISS YOU!" and I'm sorry, it's hard not to laugh when you hear something like that. And what makes it even better is that they're so mad and want to be taken so seriously, but there you are laughing at them, and that just makes them madder. There were these two kids I used to babysit for all the time when I was in high school -- a six-year-old with ADD and his four-year-old brother -- and they were always tearing each other up over some silly thing; one day the older one got irate enough at his little bro to call him a "piece of fuck," and after I picked myself up off the floor laughing, I made him go stand in the corner and face the wall until his mom came home. At which point, of course, I told on him. Man, I'm going to be an awesome parent. 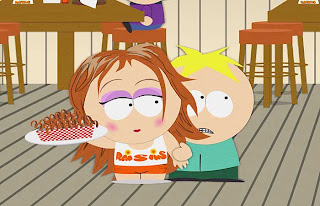 Butters from "South Park"
I've already told you guys that Butters is my favorite "South Park" character, but he's also the one I identify most closely with -- my parents never psychologically abused me or got caught in gay bathhouses or anything like that, but I was a pretty meek and shrimpy kid, easily put-upon, and about as worldly as a newborn (an Amish newborn at that). Even today, I'll do something ridiculously Butters-like, such as developing an unrequited infatuation with a Hooters waitress or subjecting myself to all kinds of abuse in an effort to make friends. But anyway, whether it's in spite of the close kinship I feel with Butters or because of it, I think he's one of the funniest cartoon characters ever. And no episode of "South Park" has had a funnier last line than Butters' at the end of the "Imaginationland" trilogy. 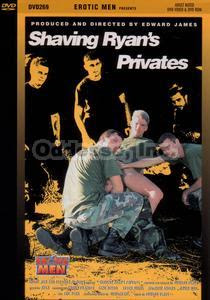 Wendy's "Ranch Tooth" ads
Again, I've already made my feelings clear about this one, too, but . . . what can I say? Ranch tooth, hilarious. I can't explain why. Maybe it's because I can identify, having a "booze tooth" of my own. I don't know. 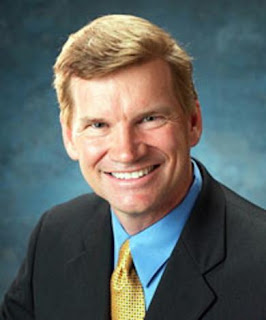 "Ex-gays"
I know this isn't especially compassionate on my part, given that these folks are surely going through a lot of inner turmoil, but come on, people -- nobody seriously believes you can actually "cure" someone of their gayness, not even de-gaying therapists (or whatever you call them), because they know they can't stop people from having homoerotic thoughts, they're just trying to cram them back into the closet far enough that their man-lust won't be able to fight its way back into the public eye. Not to mention that for every person who comes out of gayhab saying they've been "cured," there are two more who either get caught in gay trysts within a few weeks of release or who meet each other in gayhab and become a couple. I think an awesome reality show would be "Gayhab Island" where you take two dozen "ex-gays" and put them on an island and let nature take its course, and every time two of them break down and nail each other, you kick them off. Or maybe a sitcom where a gay dude comes out of gayhab, moves into a condo in Florida to start a new life, only to find out that his condo development is also the spring-training home of a professional baseball team. Can our hero's shiny new sexual orientation stand up to the sight of Derek Jeter working out by the pool? Tune in next week to find out!

And now the Ten, chosen at random from a music collection containing a level of unintentional hilarity all its own:

How 'bout you, readers -- what do you find funny (for intentional or unintentional reasons, either the ha-ha or the boom-boom varieties)? Gimme your own personal laff riots and/or Random Tens in the comments.
Posted by Astronaut Mike Dexter at 8:10 AM

I find this stuff funny-

I find people who believe gayness isn't at least in part a choice funny.

The one thing that makes me laugh on a consistent basis is Doug's imaginary vocabulary. Pickle wipe, for example. Chingina for another hall of fame one, and now, gayhab. He prolly steals them off some website, but he saves me the trouble of surfing and looking for them.

Oh, and Boogie Nights. Everything about it. The dialogue, Rollergirl beating the crap out of the high school jock, Burt Reynolds' toupé, Don Cheadle buying doughnuts for his preggers wife and witnessing a robbery, Dirk thinking of himself as a serious actor. You could go on forever.

That made me laugh last night. A lot. And this morning. A lot.

Oh, and "middle name/street?" Everybody knows its "childhood pet/street you grew up on!"

Thus, you are talking to Montana Galahad.

The bidet in general, and people mistaking it for common US plumbing fixtures in particular.

Homer stating "I think I'm blind" after staying up all night eating cheese.

Murray Hewitt's ability to take album titles as conversation ("Like Michael Jackson's Off the Wall?" "Oh...I'll say he is.")

Anyone over the age of 15 wearing face paint to a sporting event is funny.

1. The Herbaliser, "Mr. Chombee Has The Flaw" from 'Blow Your Headphones'

2. Diego's Umbrella, "The Revenge Of Wilmot" from 'Kung Fu Palace'

6. Slightly Stoopid, "Girl U So Fine" from 'Chronchitis'

7. Tupac Shakur, "The Uppercut" from 'Loyal To The Game'

10. Rose Royce, "I Wanna Get Next To You" from 'Friday Soundtrack'

The movie "Better Off Dead" still makes me lose control. Favorite quote: "It's a shame when folks be throwing away a perfectly good white boy like that."

I also find it terribly amusing when small children mispronounce mundane words to sound like curse words. Such as when "truck" becomes "fruck."

1. "Argument Clinic" by Monty Python
2. "Star Trekkin" by unknown to me
3. "Amish Paradise" by Wierd Al Yankovic
4. "Baseball and Football" by George Carlin
5. "George of the Jungle" TV Theme
6. "Hot Rod Lincoln" by Commander Cody
7. "The Knights who say 'Ni'/Bring us a Shrubbery" by Monty Python
8. "Gin and Juice" by Richard Cheese
9. "Crazy as Fuck" by MC Hawking
10. "Ding-a-ling-a-ling" by Chuck Berry

This is the funniest damn thing I've seen or heard since the Borat movie. Seriously, I can't breathe.

1.Eric Bachmann, "Carborro Woman"
2.David Cross, "Christian Sandwich"
3.The Futureheads, "A to B"
4.The Black Keys, "Aeroplane Blues"
5.Bad Religion, "A Streetkid Named Desire"
6.Pixies, "Space (I Believe In)"
7.Rage Against the Machine, "Sleep Now in the Fire"
8.Bat For Lashes, "Tahiti"
9.Bad Religion, "Don't Pray on Me"
10.Fishbone, "The Properties of Propaganda"

I regard this as humorous:
http://www.youtube.com/watch?v=Oz8WelzAKsE

movies:"eddie and the cruisers 2"(looks like it was shot in someone's bathroom)
"cobra", sylvester stallone and bridgette...need i say more?
"ghost", come on, it's pretty hilarious.

old episodes of the ben stiller show, which you can find on youtube, particularly the Backstreet Boyz.

-when people trip or fall. it's terrible, i can't help it.

Something about the words "laff riot" themselves just tickles me to death (obvs).