"There's nothing the matter with Kansas,
but what the f$#!'s up with Iowa?!?"

As a Democrat, and a pretty liberal one at that, I've had to take it from all sides for the past few years about how Democrats are European-car-driving latte-sipping elitists who have nothing but contempt for what we supposedly perceive as the uneducated bumpkins in the red states and the "flyover country" of the nation's interior. This has always been frustrating for me, since I drive a European car and have been known to sip a latte from time to time but also drink PBR and spend an inordinate amount of time working myself into a frothing rage over SEC football. I won't deny that there are more than a few libs on "my side" who have a withering, and quite frankly embarrassing, disdain for us rednecks and red-staters, but I can't do anything but roll my eyes at the folks who think the Republicans are any better. I mean, you can slap a pair of cowboy boots on Dubya and send him down to Crawford to cut brush every frickin' weekend, but he's still a Connecticut-born private-schooler who comes from one of the most inside families in Washington. You're a good ol' boy and a Washington insider? OK, fine. Tell me more about what it was like to have a dad who ran the CIA.

So it's been interesting to see some of the same establishment Republicans who've been pushing this the-Dems-don't-care-about-you meme get completely befuddled by the candidacy of Mike Huckabee. This article sums it up about as well as any:

The rap against Mike Huckabee, the Baptist preacher and ex-Arkansas governor now doing for the Republican Party establishment what three-alarm chili does for an afternoon nap, is that he’s too inexperienced to be president, too naïve — a rube straight out of Dogpatch.

Few of Huckabee’s critics have actually come out and said what many of them think. The language is coded, as it usually is with class and race in this country. The Wall Street Journal, the anti-tax jihadists at the Club For Growth, the National Review -- these pillars of Old School Republicanism have signaled that Huckabee is Not One of Ours. But they’re careful to say it’s not about class, because, of course -- it is!

It’s okay to have faux rubes, a la Bush senior and his pork rinds, or George W. and his Midland malapropisms. But when something that looks like the real thing comes along, the Republican royalists get apoplectic. They were appalled at the recent YouTube debate because it looked like a parody of one faction of their party –- complete with Bible-waving wackos, trigger-happy gun nuts and Confederate-flag enthusiasts.

Among fellow Republican candidates, Huckabee is certainly “not one of them” in the bottom-line sense. All the other leading contenders would be comfortable on the massage table at a Trump seaside resort, in between seminars on how to keep poor people from getting health care. Romney, with a net worth estimated by Money magazine at upwards of $250 million, made his pile with an investment firm. Rudolph Giuliani is close to the $50 million club, enriched by such heavy-lifting as trying to help the makers of OxyContin stay out of jail.

Huckabee tells audiences that he is one generation removed from folks who slept on a dirt floor, and that he’s the first person in his family to graduate from high school. It’s a terrific narrative, as American as they come.

A bit over-the-top? Perhaps. But no more over-the-top than this dandy little missive (big hat tip to this post at Sadly, No!):

I’ll put this in language even your tiny little Iowa brains can understand: What the f*** is wrong with you people?

The news coming out of Des Moines (literally, French for “tell me about the rabbits, George”) tonight is distressing in the extreme. 32 years ago, your Democratic brethren took one look at Jimmy Carter -- the worst 20th Century President bar Nixon, and the worst ex-President ever -- and declared, “That’s our man!”

My goodness. Doesn't that kind of remind you of a more profane version of . . . this? 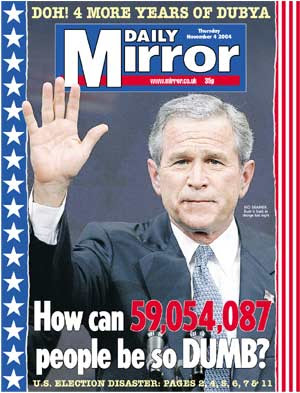 I knew even some Democrats who were pissed off about that, and you can kind of see why. But here come the establishment Republicans, expressing that same kind of contempt -- and this time it's about people in their own country. Reject the Romneys and Giulianis that the GOP big guns have pre-selected for you, and that's all it takes for VodkaPundit to deem you a "corn-sucking idiot." The folks over at National Review practically climb all over each other to be the first one to dismiss you. Rush Limbaugh's laying into you with both barrels right about now, too, since he and Huckabee have been going at each other for a while now.

All you evangelicals and rural red-staters who thought that the Republicans were the only ones who could truly represent you, who cared about you when the nasty elitist Dems didn't: This is what support for the GOP gets you. They want your money and your vote, but they don't actually want you to think about anything for yourself. Just take the candidates and the positions we give you and shut up.

I've already made my opinion clear that I don't exactly think Huckabee is all he presents himself as, either, but if his ascendancy can finally sink the silly-ass idea that the GOP power base actually gives a rat's ass about anyone in the "flyover country" with an annual income under $100K, I might actually have some fun watching it after all.
Posted by Astronaut Mike Dexter at 1:49 PM

Email ThisBlogThis!Share to TwitterShare to FacebookShare to Pinterest
Labels: politics, teh suxxorz, the 2008 election

Obama actually got three-tenths of one percent of Iowa's population to attend the caucuses and vote for him. YeeHaw. The sole reason some druidically arcane political Bardic Circles in the state owned by Archer Daniels Midland is this influential in presidential politics is the livelihoods of self-serving, self-appointed anal-ysts.

With the gang of lunatics, xenophobes, chickenhawk war-mongerers, and the guy with Oldtimers that make up the Greedy Old Plutocrat selections, the Democratic Party could probably run George McGovern and win by a landslide. As fortune has it, the Democratic field is exceptionally strong.

Hillary? Well if Tip O'Neill had actually practiced local politics instead of siding with Republicans and other timorous Dems, her health care plan would by now have morphed into something the country could be proud of instead of the shame of 50,000,000 children with no recourse but emergency rooms. Oh, and there'd be several trillion more bucks percolating through the American economy. I admit it might have been hard on the footsoldiers manning the insurance company's legal armies, but, you know, that's why God made the food service industry.

Barrack? I was on the bandwagon even before the '04 election. He reminded me a lot of JFK, and a little of Bobby (hope springs).

Richardson? He actually has the proven ability to get sworn enemies to make peace.

These three first, because, well, a woman, a black guy and a Hispanic former pitcher. Big Tent y'all.

Edwards? A 'trial lawyer'. Wouldn't this drive the Norquist crowd to even more single malt? Aren't lawyers supposed to try cases for people that have been wronged, grievously, rather than arrange graymail? My only complaint about Edwards is that it was his (not Kerry's) job to go bulldog on the Short Boaters and he didn't.

Hell, I'd vote for Gravel before any of the freaks the Gross Oil Purveyors are considering. Mr. Toad's Wild Ride.

Love him, like him, dislike him, hate him, or ambivalent, this article on Huckabee from a while back is worth a read- really interesting; it addresses a bit of the 'what is he hiding?' theme you were pondering about last week: