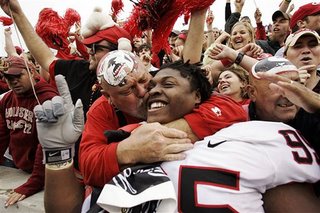 4. Florida (7)
A three-slot rise is probably too much given the way they had to squeak by South Carolina, but lost in all the conversation about how crappy the Gator offense has looked over the past few weeks is the fact that their defense is downright terrifying. And it's on the basis of that that I think they'd beat the next few teams on a neutral field.

5. Rutgers (19)
I normally shy away from jacking a team up this many slots at once, but it's starting to look like I had Rutgers underrated for too long.

8. Notre Dame (13)
Another team that probably rose more slots than they deserved, but a bunch of teams above them did lose, so . . .

11. Texas (3)
Bad, bad loss to KState, and it's not like you can even blame it on Colt McCoy getting knocked out. What the hell happened to the Longhorns' defense? I know their secondary has been weathering some injuries of late, but 269 passing yards to a first-year starter?

14. Wake Forest (18)
The Deacs had their second string on the field and FSU still couldn't score. So allow me to reneg on my promise to be brief and diverge for a moment on the Bobby Bowden situation. Yes, I know he brought the program up from anonymity and he's done some incredible things in Tallahassee, and respect needs to be given, but there is absolutely no reason for him to be keeping his son as the offensive coordinator the way the 'Noles have been playing. And I think the school would be perfectly justified in throwing Bobby's past accomplishments out the window if he continues to let his loyalty to his son override his responsibility to the team; there's not a company in America where you wouldn't be fired if you held on to a blood relative this long in spite of their repeatedly demonstrated incompetence. Maybe I'm being overly harsh, but if I'm the university president or AD, I sit down with Bobby after the conclusion of this season and tell him, "Either Jeff goes or you both do." If Bobby's primary loyalty is to his son and not his school, then the school shouldn't get all hung up on any loyalty to him.

17. Auburn (6)
I don't like to drop a team by this many slots either, but they went up against a Georgia team at its lowest point in probably a decade and just got completely dominated. And they got dominated in ways that confirmed all the weaknesses people had been murmuring about pretty much since the South Carolina game.

19. Georgia Tech (17)
Seven whole points against a serious contender for the title of Worst Team in D-IA? I'm actually looking forward to the UGA-GT game now.

That is a joke of a ballot.

I can even buy Rutgers being so high. However your distaste for the Trojans and your SEC homerism (look at your mighty conference now) should disgust all readers.

Arkansas above USC? "Well, they're playing better right now..." I'm sure with your superpowers of observation you were able to conclude that. How about you vote what actually happens on the field? How's that for a voting philosophy?

You would expect a man to pick loyalty to school over loyalty to family?

Yeah, so we took it easy. Wouldn't you? I mean, how many seasons do you get a chance to have 2 bye weeks?

...just as long as the effect of those bye weeks don't leave Tech permanently on low speed! I mean, how can we live with Doug if...if...and won't it be fun if...if...

Funny, Tech can't wait to face you guys this year either.