Thursday Mystery Meat, in which I return from the beach neither tanned nor rested, but nevertheless ready. 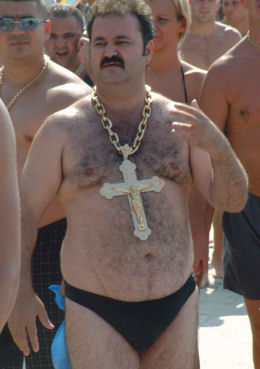 This was my preferred beach look over the previous weekend. Line forms to the right, ladies.

Well, I got back from Panama City on Monday rested and refreshed (and not even all that hung over, amazingly enough) and I was going to get right back to blogging, but then I realized something: I just didn't have anything to say! What makes that any different from the thousands of other times I haven't had much to say but have found an excuse to bitch and moan anyway, I don't know, but here I am, I'm back, whoopee. Time to catch up. 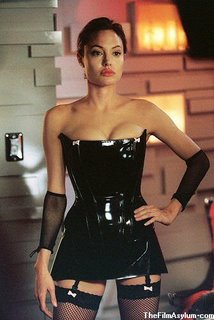 This is what I'm getting for my birthday! OK, not really. But I felt I had to apologize for the top photo somehow.

· I know you slags were just hoping you could lay low and bide your time while Sunday came and went, but I'm not letting you off that easy -- Sunday's my birthday and you still have to get me something. Need ideas? The list is here -- and just so you know, a friend of my sister's has already beaten you to the punch on snagging me one of those big-ass Angelina Jolie posters from last year's "Mr. & Mrs. Smith" promotional blitz. Yes, Ann's friend Jen, who lives in San freaking Francisco and whom I've never even actually met in person, is getting me something. Thus, particularly if you're a friend of mine I've actually met before, you officially have no excuse if you don't.

· Well, I guess we can officially end the pre-emptive right-wing gloat-fest about how the Dixie Chicks' new album was going to bomb, as Taking the Long Way has hit #1 on two Billboard charts this week. Now, my intent in mentioning this is not to counter-gloat, since I'm not really a fan of the Chicks or of country music in general (unless it's this guy -- represent!), but merely to pose a question. OK, so like, every time a Dixie Chick or a George Clooney or whichever famous person makes an anti-Bush or a liberal-identified comment, you've got your Ann Coulters and your Glenn Becks bum-rushing the airwaves to lambast them and wonder out loud why all these stupid-ass celebrities won't just shut up. "Who cares what the Dixie Chicks have to say?" they ask. Well, my question is, who cares what Glenn Beck or Ann Coulter have to say? What have they ever accomplished that would make their opinion more valuable than Natalie Maines's, or that would make their right to say it more important? Basically, if Coulter and Beck are going to take advantage of their right to spout off whenever they feel like it, they're going to at least have to tolerate the rights of the Clooneys and Maineses of the world to do the same. And the more they whine about mean nasty elitist liberal Hollywood movie stars, the more they look like jealous asswipes. Then again, maybe they're just carving themselves a niche.

· Speaking of Ann Coulter, I guess my letter-writing campaign to defend the honor of Max Cleland a couple years ago got me on her mailing list, because I get a postcard every time she's about to barf a new book onto the shelves. The promo blurb for her latest effort, Godless: The Church of Liberalism, read, I shit thee not, as follows:

When President Hillary Clinton uses the subpoena powers of the 2009 Hate Crimes Law to find out what books you've purchased, make sure GODLESS: THE CHURCH OF LIBERALISM is on that list!

All righty. Leaving aside for a moment the twin ironies of

1) a woman* who, by her own admission, does not attend church calling me, a weekly churchgoer and Eucharistic minister, "godless"; and

2) a woman* who vociferously supports the NSA's warrantless wiretapping/phone-call-monitoring efforts getting her jock strap in a knot over some fantasy of Hillary Clinton tracking what books people are reading,

what we have is a tacit admission by Ann Coulter that the country is so fed up with eight years of Republican pooch-screwing that they're going to elect a Democrat in 2008. So fed up, in fact, that they're going to elect that commie lesbian Hillary! Dang, I knew Bush's approval ratings were way down in the septic tank, but I had no idea things had come to that. (By the way, is anyone else amused that Ann's book is coming out on 6/6/06? And she's calling me godless?)

I wouldn't describe myself as a huge fan of either, but I know what I like and what I don't.

· All right, anyway. If you're tired of my political bloviating, read some of John Rogers's political bloviating. His is a lot better than mine. This particular post deals with the "chickenhawk" epithet lobbed at conservatives who call for wars without expressing any interest in fighting in them. Awesome read.

· And finally, just to give y'all a little taste of what life in Alabama is like . . . 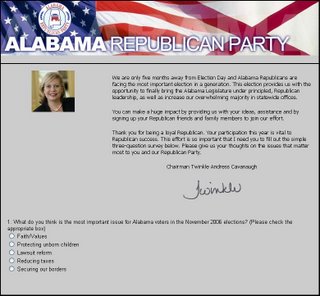 This came from an e-mail that got into the hands of a good friend of mine, one who lived in Mobile for a long time before saying the hell with it and moving to the good life in Atlanta. Notice anything missing from this list of what the Alabama Republican Party thinks should be on the top of the voters' priority lists in November? Maybe national security, education, Iraq, the skyrocketing costs of health care, that sort of thing? Nah, son -- Twinkle Andress Cavanaugh (yep, that's her real name) apparently thinks that's just a lot of unimportant bullshit that will only distract the Alabama GOP in its vision quest to ban abortion, make malpractice suits illegal, bleed the government dry, and smear the queers.

In her defense, though, I'm all for securing our borders. We've been leaving Alabama wide-open for too long, and I want those people from Tennessee to keep the fuck out, knamean?
Posted by Astronaut Mike Dexter at 2:00 PM

Email ThisBlogThis!Share to TwitterShare to FacebookShare to Pinterest
Labels: hot chicks, Mystery Meat, politics, self-aggrandizement, stupidity, you know what I blame this on the breakdown of? society

Bless her heart, but I can't take anyone seriously with a name like Twinkle.

I was a little disappointed at Twinkle's sidekicks - Bettye and Edgar might be mildly interesting names if La Twink hadn't set the bar so high.

Well, at least Twinkle's always been a woman. I mean, I assume she has anyway -- unlike other blonde "female" Republicans featured in the post.

And when King George uses the patriot act to see what you have been reading online without bothering to get a warrent, make sure Hey Jenny Slater is on the list...

Now why in God's name would anyone from Tennessee want to go to Alabama? Even for the day? Except for missionairy work or to show the natives how in door plumbing is used there seems to be little point in it.

We flush our toilets up north here and assume it leaves a skid mark in Tennesee before finding it's resting place in Alabama.

The best thing to come out of Alabama was the toothbrush. If it had been invented anywhere else they would have called it the Teethbrush.

I never saw your support campaign for Max. I had the pleasure of knowing him when I worked on capital hill years ago. A fine senator and an even better human being.

A belated thanks for your efforts. What she did was just dispicable.

She does make a good point about abortion, though. Gotta clean up your own house before you clean up others'.

Given that abortion is one of the greatest atrocities the human race has ever committed, I'd say that definitely belongs on the list ... even if it was made by a woman named Twinkle.