Heaven knows I don't like to brag, but not only is my taste in music impeccable, I am also extremely secure in my sexuality! 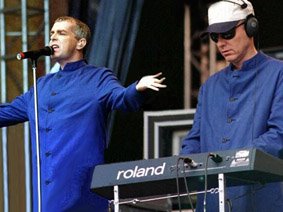 I really prefer the kinds of concerts where you yell out a request and the singer has to ask "Which remix."

First of all, before I begin with what I was originally going to write about, allow me to willingly add some fuel to the oft-discussed possibility that I'm gay by saying:

Sorry to get so worked up about this, but live Pet Shop Boys performances in the U.S. only happen about once every five years or so, so this is kind of a big deal. Plus it's not like I'm getting all worked up about the forthcoming album releases by Paris Hilton or Britney Spears or something. Now that would be Teh Ghey.

Amazon tells me that the special double-CD edition of their new CD, Fundamental, that I ordered isn't going to get here until July 10. I ordered the import version of all this stuff, and the CD (and its first two singles) have been out in Europe since like the end of May, so . . . I don't know what the holdup is, but when I get it, rest assured you'll find out about it here.

By the way, Kanu is right: Soccer clubs really do use "Go West" as the tune for their victory chants. My first confirmed sighting (listening?) was directly after the England-Ecuador match on Sunday, and while the acoustics in Stuttgart's Gottlieb-Daimler-Stadion were not such that I could make out any of the words, it was still nice to hear the song. 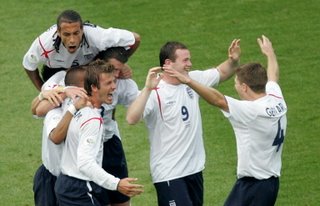 Since I don't know what the words to the English national team's chant is, I'll simply have to shout . . . One-NIIIILLLL! To the Ar-se-nal! . . .
Posted by Astronaut Mike Dexter at 9:50 PM

Email ThisBlogThis!Share to TwitterShare to FacebookShare to Pinterest
Labels: the staggering genius that is the Pet Shop Boys

Damn -just finished putting this present in the comments section below, so allow me to just cut & paste.

I'll make an Arsenal fan of you yet, Doug.

Forgot Polish version during the Ecuador match in round 1: