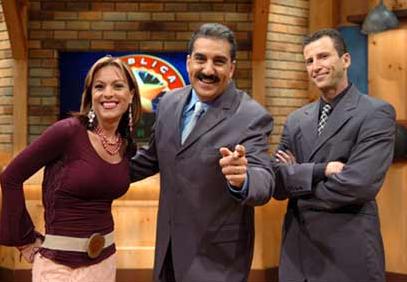 Fernando Fiore (center): With Tom Selleck and Sam Elliott, another proud keeper of the mustache flame.

I said it once before but it bears repeating: Kanu is right, and soccer on Univision is the only way to watch the World Cup. In fact, if Univision were to pull the shocker of the century and make an end run around ESPN to snag exclusive broadcast rights to college football, I'm not convinced that we'd be worse off for it. Here's why:

· Try and think back to the best touchdown call you've ever heard. A simple "Touchdown"? Chris Berman's once-grand, now-slowly-growing-ever-more-tiresome "He! Could! Go! All! The! Way!"? I guarantee you, everything you've ever heard pales in comparison to Univision's Pablo "GOOOOLLLL!" Ramirez. Imagine watching a football game and being treated to, at every TD -- regardless of which team scores it -- a possibly overcaffeinated Hispanic guy bellowing, "TOUCHDOOOOOOWNNNNN!" Or perhaps "MOMENTO DEL ATERRIZAAAAAAJEEEEE!" Brent Musberger doesn't have a single downhome metaphor in his entire arsenal capable of competing with that.

· In terms of second bananas, you've got Jesús "Si, Si" Bracamontes versus, oh, say, Bob Davie. Now, if you don't speak Spanish -- and Lord knows I don't -- you can't understand a word Bracamontes says other than "Si-si," so basically all you know is that he's agreeing with Ramirez, whom you couldn't understand in the first place (unless he was yelling "GOOOOLLLL!"). But tell me, is that really all that big a step down from Davie using the modifier "football" (I'm sorry, "footbaw") every five seconds? Here's what soccer on Univision would sound like if you threw Davie into the announcing mix:

· Instead of Rece Davis trying to referee between Lou Holtz's unregulated senility on one side and Mark May's 180-proof crankiness (and mangina) on the other, you'd simply have Fernando Fiore (pictured above) actually knowing what he's talking about as he gets down with his mustachioed self. 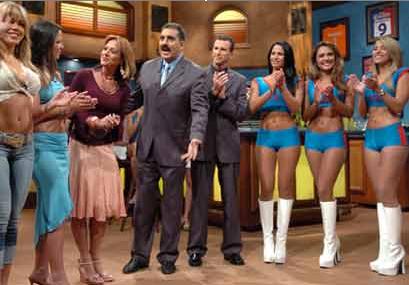 It took me exactly 37 minutes to realize there were two dudes in this picture.

· You'd still have "College Gameday," only it would be called "Republica Deportiva," and it would go like this: The aforementioned Fernando Fiore would talk football for a while, occasionally throwing it over to Rosana Franco for some fan-on-the-street opinion, and giving the viewers some things to watch out for during that day's college football action. Then, when it came time to make the "official" predictions, instead of Lee Corso jinxing a team by donning that team's mascot head to the cheers and/or lusty boos from the live crowd, you'd have the legendary Senadoras trot out wearing the uniforms of the predicted winning teams. Only they'd be slightly, er, modified, as per below: 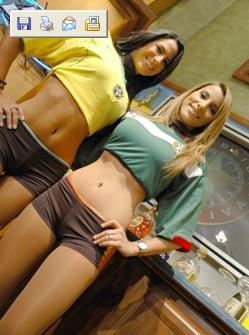 Yup, when I talk about uniform modifications, I'm not talking about Laura Quinn's silly-ass Notre Dame/Ohio State hybrid jersey, I'm talking about belly shirts, hot pants and knee-high boots, and two scorchingly hot Latinas whose job description involves nothing other than standing around wearing them and making the occasional sports-related comment I can't understand anyway. After a few minutes of this, you wouldn't be missing mascot heads or "Not so fast, my friend."

So I hope all this helps you to understand why I was able to spend nearly the entire weekend sitting around watching a sport that, as I've previously explained, I really only care about once every four years: impassioned announcers, international brotherhood, and a show that basically amounts to "College Gameday" with strippers. 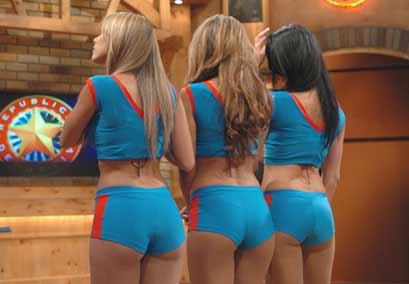 I, for one, will be sorry to see el Copa Mundial go.
Posted by Astronaut Mike Dexter at 9:55 PM

I've been watching RD on and off for damn near 10 years, and I am glad that others are finally being exposed to it's utter awesomeness, for which we can only say:

Thank you ABC/ESPN, for your abysmally shitty coverage, which is so amazingly bad that thousands of Americans are switching over to Univision and watching in Spanish even though they cannot understand what they hell the announcers are saying.

Part of that is down to ESPN defectors, no doubt.

ESPN's coverage of the World Cup has, in fact, driven me over to Univision. The last straw was Rece Davis' postgame analogy of a late goal being the equivalent of an NBA "buzzer beater." If Americans are ever going to understand the "Beautiful Game" we must not only PLAY like the other countries do, but describe the game the same way. A scoreless tie doesn't end "nothing to nothing." It's "nil, nil." Simple stuff like that. My wife is English and she's deleted ESPN off the remote control until mid July. Too bad we can't get the BBC's coverage for all those who do not understand what futbol means. GOL!

Univision was sold today for $12.3 billion with a B.

The consortium is headed by a Texas firm, so I hope they don't give it the Red State treatment...

I mis-posted this in another post. (Damn, it's late and I am making up words and epeating others)

Doug,
It's Donnie Young. I guess you would have figured it out eventually, after some sort of DNA test, you creep.

I saw your College Football / Simpsons deal months ago and sent it to a bunch of people but had no idea you were the creator of the link. I just figured it out when looking at John Pezold's blog: http://www.pezold.blogspot.com/

Take care. See you at the next reunion for the HHS Class that I wasn't in.