Alabama's 2006 primary was yesterday, and both Democrats and Republicans should be pretty happy with how things went. For the gubernatorial nomination, Lucy Baxley beat former Gov. Don Siegelman with nearly 60% of the vote, meaning that the Dems will be able to avoid the expense and annoyance of a runoff later this summer; I've met Don and like him a lot, and think he did a lot of good for this state when he was governor from 1998 to 2002, but there's still just too much heat on him over his ongoing trial for racketeering and bribery. Based on what I know about this case, I'm pretty confident that he'll be found innocent of the charges and the trial will be exposed for the politically motivated farce that it is, but now just isn't the right time for him to be running again. I do hope he comes back in 2010, though.

And even the Republicans proved they could do something right by re-nominating Gov. Bob Riley overwhelmingly over world-class embarrassment Roy Moore (Riley won by nearly a 2-1 margin), and Moore's loyal lackey Tom Parker got whipped almost as bad by Drayton Nabers in the primary for Supreme Court chief justice. That had to have been one of the most bizarre races I've ever seen, with two right-wingers battling tooth and nail to see who could shout "liberal tool of the trial lawyers" the loudest, but Nabers did stick his neck out to support 2003's ultimately unsuccessful tax-system overhaul, so at least he's got some integrity.

The only real sour note -- other than my good friend Dale Jones falling short of a nomination for District Court Judge -- was in the Democratic primary for attorney general, where racist Holocaust denier Larry Darby somehow managed to garner 43.5 percent of the vote. I can't for the life of me figure out what made this sicko run for the Democratic nomination as opposed to going with the backing of a party more in line with his views -- say, National Vanguard, a monthly meeting of which he attended in New Jersey earlier this year -- but I guess I should just be glad he lost and will hopefully never be heard from again. (Although he was responsible for some highly entertaining infighting among the inbreds of the radical racist right wing.)

Be that as it may, though, it's still embarrassing that someone like Darby could get 43.5% of the vote in any party's primary in this state. I have a good friend, a true-believer progressive whose opinion I respect above maybe anyone else's outside of my own immediate family, who is very nearly prepared to sever ties with the Democratic Party over this development; given how hard the state party worked to distance itself from Darby (though unfortunately they couldn't just summarily boot him off the ballot), I don't think the problem here is so much with the state Democratic Party as it is with the state itself . . . but that isn't exactly much of a consolation, nor is it meant as one.

Lucy Baxley, however, kicks ass and is a candidate I have no qualms whatsoever about supporting. And I think her chances are better than a lot of people realize. Just to give you an example of why I think this is the case, for a long time there was a billboard-sized sign on I-65 about 15 minutes north of Montgomery that had long been one of the state's most famous roadside landmarks: It read "GO TO CHURCH OR THE DEVIL WILL GET YOU!", and even had a little red devil on it for a long time. Obviously, one's first impression of the person who put up this sign would probably be that he's a conservative Christian who would no sooner vote for a Democrat than he would host a pagan ritual on his property. But a few months ago, the "GO TO CHURCH" sign was replaced by a new one: 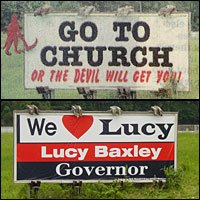 NPR did a whole piece on the sign change that you can listen to here. Go, Lucy, go.
Posted by Astronaut Mike Dexter at 7:59 AM

Doug, go to church or the Devil will get you. He hasn't already has he?

Damnit Doug, you overlooked what matters in the Darby/Tyson duel (and I know you read it from my e-mail). Tyson didn't campaign, and no one knew anything about either of them (I don't think Darby's statements got much play anywhere). Also, as I understand from "inside" sources, the Darby family name is powerful in North Alabama (regardless of whether Darby is related to them or not). So, that probably helped, as well as low turnout.