Oh, and remember that stuff I said about being interested in the World Cup? Consider that close to retracted, too -- the U.S., as you may have heard, is out, and all but one of the Eastern European countries will be staying home for the playoffs, too. Guess it's all on you, Ukraine. Make me proud! 'Cause if y'all get beat by Tunisia and go home, I will be officially out of teams to root for. 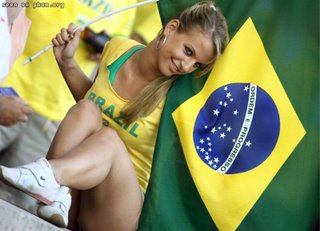 On the other hand, Brazil will still be very much in it . . . all right, World Cup, you got me for a few more days. I'm mad at you, but I can't stay mad at you.

· At least the World Cup will give me something of a sporting nature to watch between now and football season, because after last night -- hell, make that the last month -- I'm certainly having trouble looking at the Braves.

· Not only did baby sis's blog turn 2 on Wednesday, there's a chance she may be moving up here to the B-hizzy before long. You didn't hear it from me! Well, since I've published that on a public Web site for all the world to see, I guess it's quite obvious that you did hear it from me. But anyway, go over there and wish her congratulations, and take in some writing that's way better than this shitty blog while you're at it. 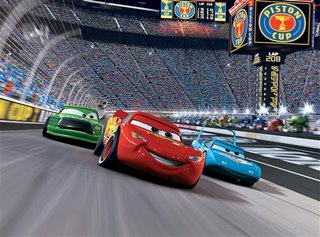 Finally, a role for Owen Wilson that doesn't have people asking, "What's up with his nose?"

· And before you ask, yes, I was one of the several million people who helped keep "Cars" on top of the box-office list for a second straight week last week, and yes, it was awesome for realz. I mean, it features the voices of (among others) Richard Petty, as a veteran race car called simply "The King"; F1 driver Michael Schumacher, as (what else) a Ferrari; Tom and Ray Magliozzi (from NPR's "Car Talk") as a couple of rusty beaters; and my personal favorite, George Carlin as a stoner VW Microbus. (Given the name of this blog, I would be remiss not to point out that Jeremy Piven also contributes some voice talent as the main character's agent, possibly a shout-out to his character on "Entourage"). Anyway, kickass flick.

· I took a lot of heat for making a major reach and taking Ben Roethlisberger in the third round of our fantasy football draft last year -- most of it from a guy who took Donovan McNabb in the first round, so I'll leave it to y'all to determine which one of us was the sucker born that particular minute -- but suffice to say I won't be making that mistake again. Not because Ruthless isn't an awesome player, because he certainly is, but . . . jeez Louise, what a dumbass. For those of y'all who think wearing a helmet makes you look like a dork, I'd like to know what you think "multiple facial fractures . . . a 9-inch laceration to the back of [the] head, and a number of [lost or chipped] teeth" would make you look like. Over at Georgia Sports Blog, Dawgnoxious offers the sad story of a former Bulldog whose career came to an untimely end a few years ago after a motorcycle accident, though said player did recover from near-fatal injuries to return to school earning his degree. 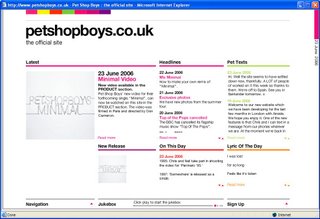 · And of course I have to remind everyone that the Pet Shop Boys' new album, "Fundamental," is out Tuesday; their newly made-over Web site (above) was up Monday. Yes, my special-edition copy of the album has already been ordered. (In fact, it was ordered several weeks ago.) Kanu clued me in on an interesting fact, that the Pets' remake of "Go West" is currently used as the tune for soccer chants the world over; I'll be listening out for it as the World Cup heads toward the finals.

Your Ten, and your remaining World Cup rooting interests if you have any (as well as any spottings of "Go West" in the stands), in the comments below.
Posted by Astronaut Mike Dexter at 7:30 AM

After watching the U.S.-Ghana match I have to say it looks like the U.S. squad also lost interest in the World Cup, unfortunately right before the match kicked off. What a terrible performance. Shame Clauda Reyna is going out with the memory of be picked clean right in front of his own goal. Sheesh.

They're actually playing Go West at the end of every game. I thought it was a fluke at first, but no.

I'm pulling for Ghana at this point, and whoever's playing England.

Susan and I took Thomas to see "Cars" last weekend---it was the boy's first time seeing a movie in the theatre---and I agree with your favorable assessment. However, I must complain about one thing:

Up to this point, casting the voices for Pixar pictures has been spot-on: Mike Myers and Eddie Murphy in "Shrek," Billy Crystal in "Monsters, Inc.," Tom Hanks and Tim Allen in "Toy Story," and (most especially) Craig T. Nelson, Samuel L. Jackson, Jason Lee, and the delightful Holly Hunter in "The Incredibles."

I'm sorry, but Owen Wilson simply wasn't actor enough to pull off a part with the depth and range of Lightning McQueen. The producers could have gone any number of ways with this---Will Ferrell, Vince Vaughn, John Cusack, Jack Black, even Kevin Pollack---but Owen Wilson just wasn't up to the task.

Here's hoping they bring in someone to redub the part for the D.V.D. release.

Not to nitpick, but "Shrek" wasn't from Pixar.

Love Will Tear Us Apart. Classic.

Find out a bit more about Schumacher on my blog