Stuck inside of blah blah part II, Stuck Inside of Westchester County edition.

It has come to my attention that some of y'all may have decided that I'm a dumbass because I quite possibly sat and watched while my flight left without me a few days ago. Now, let the record show I've never denied being a dumbass, but I don't think I'm a dumbass for that reason, or at the very least AirTran is equally culpable in my dumbassery. I mean, yes, ask anyone who knows me, I have an attention-deficit problem and I've been known to flake out mentally on more than one occasion, but really, what are the odds that I zoned out at the exact moment when AirTran was either paging me or announcing last call for the 12:09 to White Plains? I think the chances of those two things coinciding precisely is very slim, so I'm not taking full responsibility for that one. At any rate, AirTran graciously offered to put me on the next flight to White Plains, I graciously accepted, and that was that.

Except the next flight to White Plains didn't leave until 5:25 p.m., which left me another four hours to dick around the airport. And I couldn't even get an adult beverage in my own concourse because all the bars and/or grills were packed to overflowing with people watching the opening World Cup match, so I had to go all the way to Concourse A, though the bartender at the Chili's there was very nice. (I think the only thing less statistically probable than me zoning out at the exact moment my flight was called would have to be getting a "no" answer to the question "Would you like me to make that a double for only two dollars more?") When I got back to the gate, they announced that because of bad weather in New York, departure time was being delayed two hours. We actually ended up leaving 30 minutes earlier than that estimated time of departure, but that ended up meaning little, for reasons I will explain. 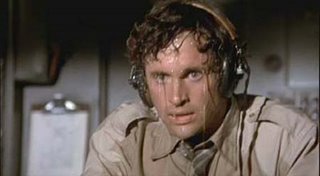 There was a godawful thunderstorm over New York on Friday night, and we ended up having to circle the airport about three times before we could finally land. (At one point we had just about committed to landing before the pilot pulled up and got the hell out of there as fast as he could -- apparently there were wind shear reports in the area -- and when you consider just how many extremely high-profile crashes have occurred under such conditions, I'm kind of glad he did.) But anyway, this is the kicker: We land in a driving rain at about 10 o'clock, the whole cabin applauds, we pull off the runway, and then the captain's like, "Ladies and gentlemen, we'd like to welcome you to White Plains, New York; we're going to hold here on the taxiway for just a moment, because the ground crews were sent inside for their own safety after there were some lightning strikes reported in the area, so they're going to wait until the storm clears before they bring them out again."

This is apparently how things work at Westchester County Airport: It's perfectly fine and dandy to land a Boeing 717 aircraft carrying 100-something passengers in the middle of a driving frigging thunderstorm, but bring the ground crew out? Heavens no, somebody might get hurt! So we sit there with our thumbs up our asses for about 30 more minutes, and nobody can even get up to use the toilet because we all have to stay seated and keep our seatbelts fastened in case they give us the OK to start moving. We finally pull into the gate about 10:30, and it's another 45 minutes before those delicate ground-crew members who are apparently made of sugar start sending our luggage our way. I take a $22 car ride to the Metro-North train station, wait another 30 minutes for a train, ride it into Grand Central, lug my 5,000 pounds of luggage onto the N train, ride the subway to Astoria, and lug my bags seven blocks to my friend Arlana's house, whose doorstep I all but collapse upon at precisely 1:38 a.m.

So anyway. The lesson here is to beware the siren song of the $70 plane ticket to White Plains. Oh, sure, it seems like a great idea when you're buying it, but one missed flight, one weather delay, one inexplicable taxiway hold and one back-breaking trip into the city later, you suddenly realize that from the time you left for the airport (7:05 a.m.) to the time you show up at your destination (1:38 a.m.), you could've ridden the damn Greyhound to New York and done the whole thing quite possibly cheaper. 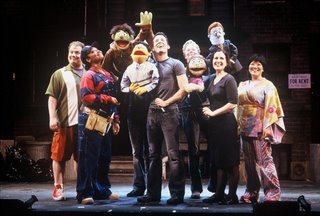 But the rest of the trip so far has been uniformly fantastic. We celebrated Arlana's birthday at the Beer Garden at Bohemian Hall, and then went to see the musical Avenue Q on Sunday. If you're going up to New York anytime soon, do whatever you have to do to get tickets; this is the musical whose main characters are puppets and which won three Tony Awards (including Best Musical) two years ago on the strength of songs such as "It Sucks to Be Me," "The Internet is for Porn," and "You Can Be as Loud as the Hell You Want (When You're Makin' Love)." The whole experience is kind of like "Sesame Street" with the F-word (and some very explicit puppet sex), and it's one of the most fun ways you can possibly spend two and a half hours in all of New York City, a place not lacking for fun stuff to do.

Then Monday I basically just wandered around town all day, and here are a few of the pictures I took while walking through Central Park: 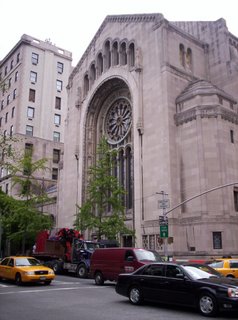 Temple Emanu-El, across the street from the park at the corner of 5th Avenue and 65th Street. 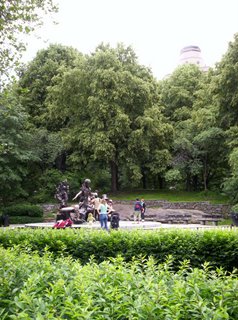 Kids playing on the "Alice in Wonderland" statue. 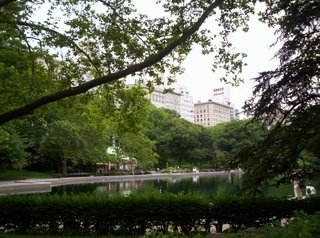 The Conservatory, with the skyline of Fifth Avenue in the background. 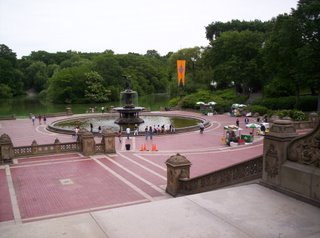 Bethesda Terrace, which is one of the places I specifically remembered from when I first came here with my dad in 1994. (Our purpose for coming up that time was because I was looking at colleges and we wanted to tour Columbia University. Chuckle if you want; I just did.) 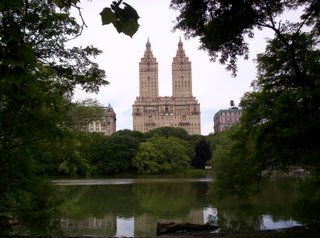 Looking from the Ramble across the lake to the apartment buildings on Central Park West, each of which I'm sure costs more to rent for one month than my life is currently worth.

I also went and saw "An Inconvenient Truth" (which currently isn't playing anywhere near Birmingham, surprise surprise) and went into Chinatown and bought a Prada bag for a friend of mine that at first I thought was fake but I now suspect might be hot (and not the Paris Hilton kind of hot). It's a long story, and I don't want to incriminate myself to any cops who might be reading.

But anyway, I'm now in Annapolis, Maryland, and I'll be here in the D.C. area for the rest of the week. More pictures will be up soon.
Posted by Astronaut Mike Dexter at 12:23 AM

Want to see the truthiness of Gore's movie. Just check out what the Canadian's (of all people) are saying about it.

It's part of the new Homeland Security thing, Doug. All airplane departures are strictly on a need-to-know basis and Chertoff decided you didn't need to know. It was nice of them to let all the other passengers on the flight know so there wasn't alot of competition for the later flight.

Ahh, the vagaries of flying into White Plains... having grew up in Westchester, I know it well. You probably would have been better off flying into LaGuardia (then again, doubtful you coulda copped a $70 flight to LGA).

I don't recall anyone saying you were a dumbass. I recall saying that you listened to your Ipod rather than your boarding announcement, and asking if you were a UGA grad. Heck, being from Tennessee that may be the smartest thing I have ever heard of a UGA grad doing....

Back to Annapolis from India. Stop by for a beer while you're here.