Friday Random Ten: Stuck inside of Hartsfield with the Memphis blues again edition. 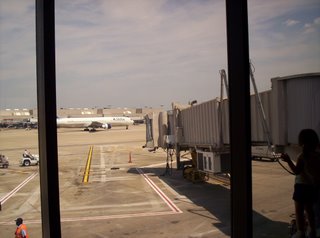 You may or may not be hearing from me that much over the next week or so, because I'm going to be in New York for the next few days and Washington, D.C., after that. But I did have to relate this bit of weirdness from earlier this afternoon, just to see if anything like this has happened to anyone else and to make sure I'm not losing my mind. (And yes, it's weirder than the "Chandler incident" from Wednesday.)

I leave Birmingham at a few minutes after seven this morning, get to Atlanta about a quarter after 10, park my car at the College Park MARTA station and ride one stop down to the airport. (I have to do cheap shit like this because I can't afford to pay $80 to park my car for a week. No, I'm not worried that my car's going to end up stolen -- I doubt any car thief would even be able to back my car out of a parking space the size of the one I parked in.) I wait in line at the check-in counter -- I won't diss the airline directly by calling it out by name, but it rhymes with "ScareTran" -- check my two suitcases, do the whole take-your-laptop-out-of-the-bag-and-put-it-in-a-separate-bin, now-take-your-shoes-off nonsense at the security checkpoint, hurry to the gate. I'm pushing it closer than I usually try to do, but I've still got plenty of time.

Starting to worry that something very bad has just happened, I run down to the information counter and ask what happened to flight 349 to White Plains. The guy tells me it left at 12:09 p.m., as scheduled. Now, I sat there from 11:45 to 12:09 and never heard a "last call," never heard my name paged for one of those "Hey, douchebag, your plane's about to leave" announcements, never heard squat from the gate attendant at any point ever. Apparently the plane just left without me, in spite of the fact that I was sitting there the whole time.

Anyway, the guy I talked to was nice and put me on the 5:25 to HPN, so now I'm sitting at a different gate with nothing better to do than watch the planes go by and blog about all this crap. And I had to go all the way back to Terminal A to get an adult beverage, because all the bars in Terminal C were overflowing with people watching the flippin' World Cup.

But anyway. If you're reading this and it's before 5:25 Eastern (4:25 Central), say a little prayer that I actually get on this one -- otherwise I may be walking to Westchester County. Let's hope it doesn't come to that.

But here's what I've been listening to while I sit and wait and watch airplanes:

So how are you doing? Music selections, weird stories, and/or off-color jokes go in the comments . . .
Posted by Astronaut Mike Dexter at 3:23 PM

So you are in an airport, listening to your Ipod and you didn't hear the departure announcements.

You are a UGA grad, right?

First time commenting here - love your blog, though. And although I am always the last person to board any plane (read: running from the parking lot, to check-in, through security and to the gate? usually in heels.) I have never arrived at one on time ? and then not gotten on it.

Musical selections? well I?ve been listening to ?True Faith? by New Order on repeat (liked your Beatles choice, btw. Were you listening to the regular or acoustic version?)

And one sidenote: While some of my fellow Gator brethren have been known to occasionally don jean shorts, I have never seen ANY of them wear a sweatervest! ;-)

I'm in India right now. You want bizarre airport stories? This is the place.

30-something guys walks into the grocery store and sees this attractive blond who tries to catch his attention and waves at him. He can't recall ever seeing her before so walks up and says:

"I'm sorry do we know each other?"

She says: "You're the father of one of my kids."

He wrack's his brain trying to figure out how that is possible and remembers the one time he was unfaithful to his wife.

"Are you the stripper from my bachelor party that I screwed on the pool table while the other stripper whipped my ass with wet celary while all my buddies watched?"

Came here to write something, read anonymous's comment about the math teacher, completely forgot what I was going to say ...

Anonymous- joke was copped from the year-end Playboy (I just read the jokes).

Doug- what a dummass, regardless of your alma mater.

Well I just look at the pictures in Playboy. It may be an old joke, but my wife just sent it to me a week ago. Doug asked for off-color jokes, and it was the 1st to come to mind.

The one I liked was the screening guy who got all pissy with us travelers 'cause we hadn't restacked the plastic bins you put your stuff in for inspection. Here we are, holding our shoes, disassembled luggage, laptop, boarding pass and photo ID, and he wants US to restack the dang bins! Man, you don't have anything in your hands! You stack the damned bins!

The last time I flew -- B'ham to Atlanta to Richmond (or something like that) -- the TSA guy frisking me said his last job was in animal control. Something tells me he'd be better looking for fleas than a terrorist boarding a plane in the Magic City.

Doug,
It's Donnie Young. I guess you would have figured it out eventually, after some sort of DNA test, you creep.

Anyway, I saw your College Football / Simpsons deal months ago and sent it to a bunch of people but had no idea you were the creator of the link. I just figured it out when looking at John Pezold's blog: http://www.pezold.blogspot.com/

Take care. See you at the next reunion for the HHS Class that I wasn't in.