Stuff you didn't want to know about me.

First of all, mad stupid props are in order for Michael from Yummy Brain Gravy and The Drizzle, who gave me the inside dope on how to sneak around Apple's best-laid plans and copy music files back off of my trusty iPod. Now my music library is whole again, and I can get back to using this computer for the use for which it was mainly intended: making an ass of myself on-line.

A week or so ago I was going to throw my own two cents in on Ann's post about the most heinous TV ads of 2005. If you haven't already, you really need to read that post, because she's spot-on in most of her criticisms, particularly the ones directed at the Dr. Scholl's "jellin'" ads (please! stab! me! in! the! face!) and at those Applebee's ads where they rewrite various moldy pop songs to shill for whatever special menu item they've got that month. Though in Applebee's defense, those aren't anywhere near as bad as Kraft taking EMF's 1991 quasi-hit "Unbelievable" (still a good song, I don't care what anyone else says) and rewriting it to pitch their new bagged cheese crumbles, with the end result being -- wait for it -- "Crumble-lievable." No, don't sing it to yourself to try and find out what it sounds like, you'll only end up hating yourself for it later. It's a shame Ann's post came out before this ad did, I can only imagine the field day she would've had with it.

Anyway, I was going to pile on with my own condemnations of ads that suck, but the more I thought about it, the more I realized that my tolerance for stupid advertising (or stupidity in advertising, as the case may be) might be a lot higher than my sister's. Like, f'rinstance, I know I'm in the minority here, but I think the Wendy's "ranch tooth" ad from last year is one of the funniest freaking ads that's ever been on TV. I'm sorry! I giggle like a little girl every time I see it; I giggled like a little girl when I was linking to it just now. Come on, a big tooth wearing a cowboy hat! It's funny! I also like the Sonic ads with the two guys in the car. I think they're funny! Sue me! You know, the two guys eating Sonic in the front seat of the car and the one on the left looks like Phil Simms.

So what was going to be a vicious skewering of bad ads instead turned into a long list of things about me -- likes, dislikes, the whole lot -- that might make those of you out there in Readerland think less of me, assuming that's possible. But I'm just putting it all out there on the table. Instead of venting my spleen at more bad ads, we're going to play a game called Is it Bad That . . . ? where all the questions are provocative and none of the answers are wrong, unless they're mine. Herewith, a view into the darkest hidden recesses of my soul:

Is it bad that . . . in the Dell ad where the perky blonde chick moves into the college dorm room with the goth chick, and it turns out they both have the same Dell laptop, I think the goth chick is the hotter of the two?

Is it bad that . . . on the subject of hot or kinda-hot chicks, I would, if given the chance, do Paris Hilton? Now, look, I know what the default response is supposed to be if you reveal something like that. "Paris Hilton? Do you even know where she's been? I wouldn't touch her with yours." And there's probably some validity to that, but I figure that anyone with as much money as Paris Hilton probably has a wide array of medical means at her disposal to eradicate whatever, uh, contaminants she may have encountered on her many forays here and there. Which means that if offered the opportunity, I'd have to do her, just for the story. I mean, come on -- this is one of those things that, like the Yankees or "Mallrats," way more people like than will actually admit to it. 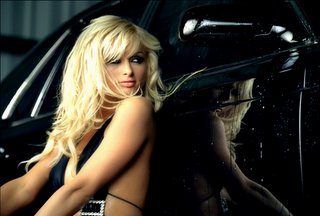 Speaking of ads I'm not ashamed to admit I enjoyed.

Is it bad that . . . I don't think Andy Kaufman was the slightest bit funny? I don't even think of him as a comedian so much as I think of him as a second-rate performance artist who managed to Emperor's New Clothes his way onto "Taxi" back in the '70s. I mean, I'm sure the guy was brilliant by some definition, if only because he managed to fool so many people into thinking that getting up on stage and singing children's songs was both avant-garde and hysterical, but does that mean I gotta laugh at it?

Is it bad that . . . I have neither read any of the Harry Potter books nor seen any of the movies? I haven't seen any of the "Lord of the Rings" movies, either, and the more people bitch at me for not having seen them, the more determined I am to not go, just to be contrary.

Is it bad that . . . I once owned Headlines and Deadlines: The Hits of a-ha? Before anyone even makes the obvious joke, no, it wasn't a single (though if they had included only the songs that anyone in America ever heard of, it probably would've been). 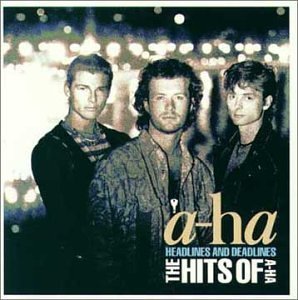 "The Sun Always Shines on TV" is the jam, motherf$#!er!

Is it bad that . . . I once subscribed to Playboy and Maxim simultaneously?

Is it bad that . . . I replaced them with The New Yorker and Harper's?

Is it bad that . . . I kind of like the Nissan Armada? Don't get excited, I would never buy one, I just think they're kind of cool.

Leave your vicious judgments in the comments section, and I may or may not try to improve my life accordingly. Keep in mind I'm kind of baring my soul here.
Posted by Astronaut Mike Dexter at 7:51 PM

I think that, love 'em or hate 'em (and I, like all good Americans, hate 'em), virtually everyone is up front about his opinion of the Yankees.

That said, you're right about "Mallrats." In the liner notes to the D.V.D. edition of "Chasing Amy," Kevin Smith hit the nail on the head when he said that "Clerks" was praised beyond itse merits and "Mallrats" was bashed beyond its faults.

Too many people panned "Mallrats" because it wasn't enough like "Clerks," but that was the point: it wasn't supposed to be like "Clerks." They're completely different sorts of films.

If you saw "Sixteen Candles" and "The Breakfast Club" in original theatrical release (as I did), you knew what Smith was going for in "Mallrats" and you were able to appreciate it for what it was.

Moreover, "Mallrats" is a piece in a larger continuum and it has to be appreciated for that. One of the things I love about Kevin Smith as a director is also something I love about William Faulkner as an author: the casual fan can see a Kevin Smith movie or read a William Faulkner novel and understand it as a self-contained artistic unit, but those of us who are familiar with the entirety of the director's and the author's respective canons can appreciate how any given part fits into the larger context of the whole.

"Mallrats" is to Kevin Smith's Jersey trilogy what "The Town" is to Faulkner's Snopes trilogy: it may be the weakest installment, but it's a necessary part of the whole . . . and your appreciation of each component is enriched by your understanding of the other elements.

If you're not well-versed in "Clerks," "Mallrats," and "Chasing Amy" alike, there's stuff in "Jay and Silent Bob Strike Back" that is side-splittingly funny that you just plain didn't get.

So, yeah, more people like "Mallrats" than will admit it. In that respect, "Mallrats" is a bit like Hootie and the Blowfish, circa 1995.

I was the same way with the Harry Potter franchise for several years. Last year my sister finally convinced me to read the first book, and I thought it was okay. "Meh," but okay. I continued on to the second book, and that was more of the same, right up until the end. Starting with the last 50 or 60 pages of book 2, the Potter saga expands and deepens appreciably with each successive entry. It won't change your life or make you a better person, but hell, neither did Mallrats. But odds are you won't be able to put the books down. I know I couldn't.

plyboy and maxim simultaneously? No problems there. Replacing them with The New Yorker and Harper's? hmm. Playboy for The New Yorker I can kinda understand, but... Maxim for anything is definitely a bad thing, man.

glad I could help, and its completely normal to find a goth chick hotter than some run of the mill blonde girl. not all goth girls are disgruntled, 350 pound high school girls who just smear black makeup on. there are a few fine examples.

Just do a google image search and you'll understand.

"The Sun Always Shines On TV" is OK (the high-pitched "touch me" lyrics start to grate after a bit), but it's no "Living A Boy's Adventure Tale" or "Hunting High And Low".

Is it bad that... I can't see, or hear, about the Nissan Armada without thinking about the naming session winding up like The Kids in The Hall sketch: Nissan's Armada featuring Herman Menderchuck?

But bad ads? BeepBeep.com. Hands down.

The guy who looks like Phil Simms is a Chicago actor named T.J. Jagodowski.