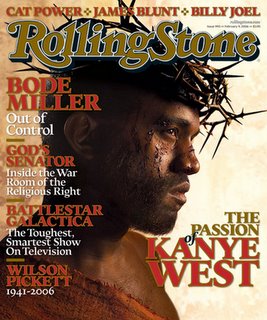 Culture warriors, come out and play-ee-ay!

. . . But before we get started, can anyone tell me why in the hell anyone thought this was a good idea? Look, I know that as a good wild-eyed liberal I'm supposed to think Kanye is a hero for calling out Dubya during the Katrina telethon, and I can't honestly say I've ever heard one of his songs I didn't like. (Kanye, I mean, not Bush, though Dubya's remake of "Cocaine Blues" on his last album was eerily compelling.) But this is the kind of stupid bullshit that only feeds the paranoia of the right-wing culture warriors who can't so much as watch a rerun of "The Cosby Show" without picking out sixteen different ways the show is insulting Christianity and accelerating the downfall of American society.

As you might have gathered by now, my sensibilities don't exactly qualify as "delicate," and thus it takes a lot to offend me. So I never thought I'd actually be uttering the phrase "this offends me as a Christian," but . . . I mean, are they actually comparing the suffering of Kanye West to that of Jesus? And I'm not even saying that I agree with what I just know is going to be the right wing's accusation, that Rolling Stone's editors are sitting around trying to come up with ways to persecute Christians, I'm just saying the idea of Kanye West's suffering as being on a par with Jesus's is witheringly inane. I'll confess that I haven't read the article -- I think I gave up on Rolling Stone after their fourth or fifth Britney Spears cover -- but seriously, what could possibly be Kanye West's claim to Christlike suffering? Taking heat for his Bush comments? Not winning a Grammy for "Gold Digger"? (Dude, I catch heat all the time for dissing Bush, and I've never won a Grammy . . . when's RS gonna Jesus me up and put me on the cover?) Howsabout from now on, before any of us decides to compare ourselves to the Big J.C., we stop and take a minute to consider what kind of douchebag company that puts us in.

Anyway, rant over. The Ten:

Fear not... we won't be seeing him much longer.

As the old joke goes: "How do you know when a hip-hop artist is on his way out? He's begun work on his third album."

This is the first time ever that the Friday Random Ten consisted entirely of songs I had heard.

Uh, you're paying attention to Rolling Stone, right? Which I'm assuming is a new thing in the past couple of years, right? There- that's why Kanye's dressing up as Jesus. It's a little more plausible than the Bravery having their credibility questioned by the Killers.