I've been informed by a commenter that ever since I switched from blogging primarily about politics to blogging primarily about college football, the Democrats have been doing great while the Georgia Bulldogs have been sucking wind. So maybe I'm tempting fate by mentioning this at all, much less the day before the election, but I thought it was important to remind everyone the kind of mentality we're up against right now, just in case anyone was thinking of sleeping off the previous night's MD 20/20s or blowing their lunch break on a pedicure instead of voting.

I've taken ample opportunities to rag on the knobs from "Blogs for Bush," a bloggin' band of right-wing sycophants who have voluntarily buried their noses so far up Dubya's ass they'd need OnStar to find their way out. But earlier this week they put up something so obtuse I was literally speechless when I saw it, and y'all probably know I'm not speechless all that often. Chief knob jobs Matt Margolis and Mark Noonan have written a book called Caucus of Corruption, which, according to TBogg, purport to show how the Democrats have run amok with all that power they've been exercising as the minority in Congress for the past 12 years. If you're already snickering at the idea that the party that counted Bob Ney and Mark Foley among its ranks should be swooning over anyone else's so-called corruption, check this out:

* Who in the Democratic Party is connected to embattled lobbyist Jack Abramoff?
* How many have run afoul of campaign finance laws?
* Who are taking free trips, accepting bribes and lobbyist cash?

It's all in Caucus of Corruption!

Yes, they're blowing the lid off how the Democrats are tied to Jack Abramoff. I'll give you a moment to recover from that . . . still there? Good. Now it's time for the irony trifecta:

I'm excited to report that Caucus of Corruption has received its first endorsement! Our first endorsement comes from Rep. Tom DeLay, a great man and politician who found himself the number one target of Democrats in their phony ethics war.

We are pleased to present to you a portion of DeLay's endorsement.

"...Margolis and Noonan have cut through the smoke and mirrors to reveal what the liberals are really hiding - their complete lack of leadership and refusal to stand up for the values-based agenda most Americans are demanding. This book is a must read for all Americans looking for the unreported motivations behind the Left's political scene."

The true story has always been there, and we're pleased that we're able to tell it. Matt and I wish to thank Tom DeLay not only for his endorsement, but also for his service to our nation.

An endorsement for a book. A book about corruption. About the corruption of the Democrats' supposed ties to Jack Abramoff. And that endorsement came from Tom f'ing Delay. Kids, there's enough irony here to fill an entire Alanis Morrissette box set, and you'd still have enough left over for any number of O. Henry stories.

This is what we're up against in '06: People so separated from reality that they didn't realize how fucking asinine that is. People who consider themselves so completely above the law that their own transgressions never once crossed their minds as they posted that, or if they did, they didn't think it was that big a deal. So if you don't vote tomorrow, you're saying that you're OK with that kind of idiocy running the show in Washington. You're saying that while you could hold them accountable for all the crap they've pulled over the last decade-plus . . . ehhhh, you just don't really feel like it right now.

Are you completely OK with how things are being run in Iraq? Then vote Republican.

Are you completely OK with senators and congressmen who think they can take over and make medical decisions for your loved ones? Then vote Republican.

Are you completely OK with a $9-trillion national debt and the biggest increase in discretionary spending since the Great Depression? Then vote Republican.

Are you completely OK with the Speaker of the House remaining somebody who shields sexual predators? Then vote Republican.

Are you completely OK with your civil liberties -- not terrorists' civil liberties, yours -- being suspended until one guy in Washington decides he's bored reading your e-mails? Then vote Republican.

Otherwise . . . you know what to do. I'm not going to sit here and tell you that the Democrats are going to save the world or even that they're going to be able to snap their fingers and clean up the Republican's mounting messes overnight. But sweet Christ on a saltine, they've got to be better than this. 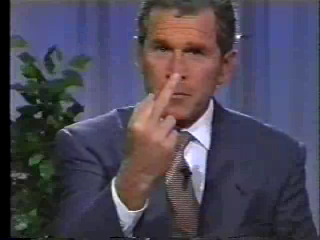 All good points. But Doug, I'm scared of the homos.

And people wonder why voter turnout is so low. Republican, Democrat, all the parties do is call each other names and focus on the negative.

I live in Atlanta and wanted to vote for Governor today. I searched high and low for each candidate's stance on ANY kind of issue. No luck, all I found was accusations about the other candidate and political party.

Sure I care about Iraq, and my civil liberties. But how do i know the Democrats won't do the same thing? History? Hell, the Republican used to be about government staying out of my life. I'd vote Democrat if I knew they would change anything. But I cannot find any evidence of that, just more mud-slinging.

I guess this is just a long vent about me not voting this year.

Alex, what it comes down to is being willing to take a chance. We know what we're going to get with the Republicans; they've been giving it to us for six years and shown every intention of "staying the course."

Not voting doesn't say, "The Democrats will be just as bad as the Republicans." Not voting says, "I'm perfectly okay with the way things are, so I'm going to let everyone else make the decision for me."

Alex,
All change for good starts at the local level and is composed of many many small steps. We aren't saying the Democrats are going to change the world overnight, but getting them into office IS a step in the right direction. If it's not, you can vote again in 2 years. That's the beauty of our system. Although, maybe not for much longer...

And "stay the course" is a better one? At least "change" gives you a fighting chance at improving things.

Alex, just vote third party. Change for the sake of change, shake it up a bit.

Like Alex said, there's no platforms. Its just, "lets change." Improving what?

I live in Florida, and not voting down here is like patting Ann Coulter on the back and saying "YOU GO GIRL! I ADMIRE YOUR SPUNK!!!" Essentially, a non-voter inadvertently becomes a supporter of the republican party because the republican base is so well established in my area. (For God's sake, I live in what WAS a retirement community until one and a half years ago.)

I strongly agree with Kevin and acg that even if you are, like the rest of us, sick of pointless propoganda, mud slinging, conspiracy, and farcical debate content, that you just go back to the basics and read a little bit on the candidate's bsic platforms. Hell, a close freind of m families is running for congress, and he's likely to win, but I can't vote for him because his platform is just TOO right wing for me.

Apathy is the path of least resistance, but believe me, by not choosig you are still making a Very definitive choice.

In all fairness Jordan, the system itself requires that neither party offer any constructive policy or long-term vision of what they'd like to do.

The second either Democrats or Republicans begin to offer detailed plans, they get shredded by the 24-hour news media, bloggers and pundits. Now, while I'm a huge fan of constructive political dialogue, I don't think Democrats saying 'let's reconsider phased redeployment in Iraq' and having Republicans answer 'those commies wanna cut and run!' is that helpful.

Neither is when Republicans say 'we've got to consider the economic consequences to a mandated minimum wage increase' and Democrats holler 'why do you hate poor people!'

Rather than, you know, act like grown-ups our candidates exaggerate beyond belief and spend way too much raising large sums of money which could be put to use in a much better way.

After scouring the Internet (again), I was finally able to track down some substantive information about Georgia's gubenatorial (sp?) candidates. From this year's primary.

I don't think I was clear earlier about my choice in voting. It's not that I don't want to vote, or I don't care. I do care, but I feel it's irresponsible to make a decision without being informed. The news can't help (trust me, ABJ Broadcast News from UGA), each candidate's site doesn't help (alternating between slamming each other and taking credit for the same things).

The race for Governor in GA is especially tricky, because both candidates are basically the same person, just with a different letter after their name. According to their sites, they take credit for passing the same laws. This is actually kind of true, since Mark Taylor is the Lt. Gov. and pushing things through the State Senate and Sonny Purdue (Gov.) signs them into law.

I'm kind of rambling now, so I'll stop. Thanks to everyone for the advice though, I appreciate it.

Alex,
I applaude your effort to make an educated vote.

I hope you went out and voted one way or the other.

"The race for Governor in GA is especially tricky, because both candidates are basically the same person, just with a different letter after their name."

It was Dumb v. Dumber.