We can't agree about anything, where to go or even where we've been. 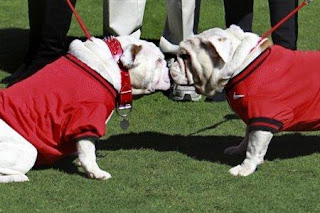 Uga VIII (left) and Russ sniff one another, and a torch is passed.

Before we get to the actual bidness here, I want to take a moment to tip my cap to Russ, a DGD who just had the misfortune of coming along at the wrong time. Though Russ presided over that four-game losing streak that even now is a little tough to talk about, he bookended it with the wins over Georgia Tech and Texas A&M last year and this year's four-touchdown Racheblitzkrieg against the Vols, so never let it be said that nothing good happened under his brief interim reign. He passes the collar to Uga VIII with a 4-4 record and, as far as I'm concerned, his big jowly head held high, and he is no less deserving of a dotage of fine meats and cheeses and decadent ice bags than any of the "official" Ugas who came before him.

But a new day, and a new bulldog, have dawned, which means it's time to look forward. And looking forward entails making sense of this: 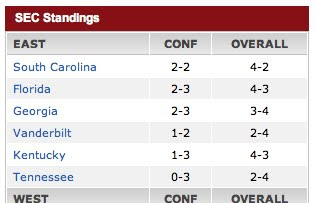 South Carolina, your clubhouse leader, remains in first place (though only with a .500 record) after taking the pipe from a Kentucky team that's still only a half-game out of last place even after the victory. Vanderbilt still controls its own destiny despite taking a 43-point jackhammering from a Georgia team that somehow does not control its own destiny, but that Georgia team, despite having just recently snapped their worst losing streak in 20 years, is still tied with the Florida team that was last year's runaway division champion. And then there's Tennessee at the bottom, still awaiting their first conference win -- but at the rate things are going, can anyone say with any degree of certainty that they won't be right back in the thick of it in just a couple weeks?

Just a few weeks ago, Georgia fans -- myself included -- were convinced that our team sucked and the universe was imploding. Now it turns out that it was just the SEC East imploding, and while our team may yet be no better than mediocre, that still might be enough to win the damn thing. In the land of the blind, the one-eyed man is king, and in the land that's doing a bang-up impression of the ACC at the moment, the one-eyed man who's just pantsed two straight conference opponents by an aggregate score of 84-14 is no less worthy of wearing the crown than anyone else. 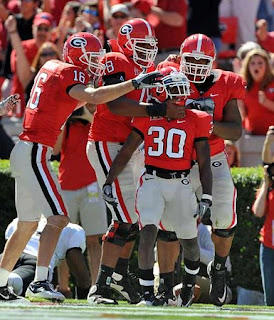 Why Carlton Thomas isn't celebrating his TDs with the "Carlton dance" from "Fresh Prince of Bel Air," I still can't figure out.

Mind you, this should not be read as gloating or overconfidence. Should the 2010 SEC season continue in this fashion, then even if Georgia comes out at the end with a not-humiliating record, a lot of people are going to be kicking themselves that we didn't grab winnable games against Arkansas and Colorado and take a lot more advantage of the chaos than we actually did. If the rest of the division is this bad, then it's entirely reasonable to look back and wonder why we didn't do a better job of bringing it under our heel. Whether we finish 8-4 or 5-7, those first five weeks of the season are going to seem like a real missed opportunity.

But OK, again, time to look forward, not back. What have we got right now? Well, we've got a young QB who's fifth in the SEC (and 18th nationally) in passing efficiency despite never having thrown a pass in a Georgia uniform prior to September 4. We've got an offensive line that is finally starting to come together and open up some holes for a running game that had been left for dead after Caleb King got suspended. We've got a defense that is -- get ready -- ranked 14th in the nation (and third in the conference) in total yards allowed, better than the Florida or South Carolina units that were supposed to be so stocked this year. A few weeks ago, we were at a point when we were starting to wish we could trade places with Mississippi State or Kentucky; Saturday night, I saw a couple Tweets from Florida fans looking longingly at us. 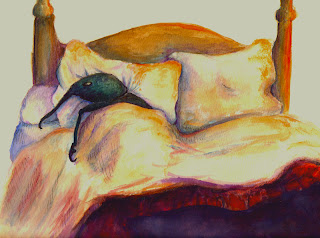 Welcome to the SEC East, where everybody looks like this.

I'm still trying to decide whether this season is more like a Kafka story or a "Twilight Zone" episode. Maybe it's both -- sort of an even weirder cross between The Metamorphosis and "The Eye of the Beholder": On October 3 we woke up to find that we'd turned into a cockroach -- and two weeks later we ventured outside to find that everyone else had turned into cockroaches, too.

Now, after all this we're still only 3-4 and flawed in a lot of areas, perhaps the biggest being our ability to get all our star players on the field at the same fucking time. (After Caleb King's arrest and suspension, I suggested -- only half-jokingly -- that Mark Richt rescind our players' driving privileges across the board, confiscating their licenses and only handing them back when they make big plays, kind of the way they receive dawg-bone stickers for their helmets.) But in the event we ever do get everyone on the field at once, it's starting to look like we may not actually be that bad a team. There's still a lot of football to be played. but at this point I think I'm actually looking forward to watching those games be played and tabling the Mark Richt Hot Seat debate until well into December.

· How delicious is it that less than two weeks after Steve Spurrier called Les Miles out for succeeding in spite of himself, Spur Dog tries to channel the Lesticles himself in the closing minutes of South Carolina's game against Kentucky -- only turns out Spurrier isn't nearly as good at being Les Miles as Les Miles is. Dude, even I'm smart enough not to call a time-out when the clock's already stopped. 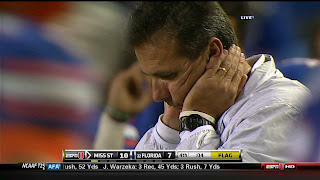 You can lie to your kids, Urb, but you can't lie to God. (From Bubbaprog at 30fps)

· As far as Florida is concerned, I know I have no right to bag on someone else for losing to Mississippi State, but at least we did it on the road, and at least we were playing well enough to make State have to work for it. In the Swamp, MSU threw only one pass in the second half, and afterward Dan Mullen was griping about how they should've won by more than they did.

· I can't imagine a more terrifying offense to play than Auburn right now. It's almost enough to make me hope for an Auburn-Oregon national title game. What do you think the over-under on that would be? Do you think it'd creep up into triple digits?

· Florida and Michigan are out of the top 25; Mississippi State is in. Michigan State is a top-10 team. Oklahoma is third behind Oregon and Boise State in both polls, but #1 in the first edition of the BCS standings. Somehow it's comforting to know that the SEC East's chaos syndrome is spreading nationwide. 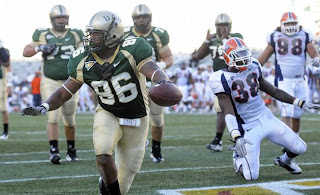 Two more teams you'll never be able to figure out no matter how hard you try.

· UAB Blazers watch: Directly on the heels of a 42-7 pounding by UCF, the Blazers come home to host a 5-1 UTEP team, and keep that team out of the end zone for four quarters in a 21-6 victory. If people would just leave UAB for dead every week, they'd probably be 5-1 right now themselves.

· Wofford Terriers watch: No problem whatsoever for the mighty Terriers this week as they rolled over Western Carolina 45-14. If you follow Pat Forde on Twitter, you've probably noticed that he ends all his Boise State-related Tweets with "Bus.", in reference to him proudly getting on the Boise-State-for-national-title bus in the very beginning of the season. As I am now firmly on board whatever mode of public transport the Wofford-Terriers-for-FCS-national-championship movement is using, I'll now be ending my Wofford-related posts with "Train," "Tram," "Shinkansen" or something along those lines. If you have any suggestions as to what I can use, have at it.
Posted by Astronaut Mike Dexter at 10:50 AM

All I ask is that if we do end up with a respectable 8 or 9 win season (which presumably you would have thought nigh impossible a couple weeks ago), you have a little more patience in the future before gettin' yo mope on.

6-6 or 8-4, it's becoming increasingly likely that the horrendous opening stretch was largely due to (1) breaking in new scheme (2) breaking in new qb (3) no aj and (4) fumbles at the goal line and *lastly* to factors which should lead to Richt's termination.

Well, Arkansas-/Auburn cracked triple digits, so I would expect Oregon to be able to keep up.