Consider for a minute who you are, what you'd like to change . . . 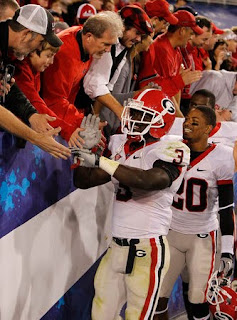 Is it just me or are postgame victory celebrations even more satisfying in other people's stadiums?

That joke popped into my head as I was looking back over the stats for the Georgia-Kentucky game this past weekend -- if you looked at the box score and only the box score, you'd think a) the offense didn't accomplish much except for Washaun Ealey and b) the defense got shredded. Both of those statements are true, and yet not. The offense didn't accomplish much other than Ealey's 157 yards and five TDs, but mainly because it didn't have to; Kentucky's cavalcade of turnovers meant our average starting position in the first half was at the Wildcat 40. Which was only fair, given that a turnover-fueled second-half implosion was what basically handed Kentucky the win in Athens last November. Some statistically misleading wins you feel guilty about because you feel like you got lucky and stole something, but if Kentucky doesn't feel guilty about last year's win -- and they don't appear to, not that they should -- then I feel just fine about this one. 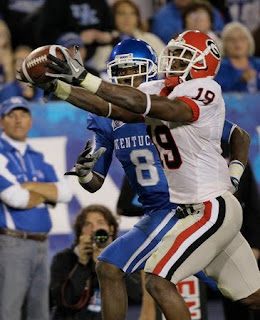 Because this win didn't come down to luck -- somebody on the other side of the line of scrimmage had to make those turnovers happen, and that's where we get to statement b), the inference that the defense got shredded because they gave up 427 yards and 31 points. Yeah, our third-down defense was kind of atrocious, and I'll admit the thought of breaking a household appliance flashed through my mind as the 'Cats converted four straight third-and-longs on their second drive. While the defense did a lot of bending, though, it didn't do all that much breaking until the fourth quarter, when the game was pretty well in hand. Not that it was especially inspiring to hear players admit that they "relaxed" with a big lead in the second half, but when you're 19 years old and you're leading 41-17 in the fourth quarter of a conference game, I guess there's a tendency for those kinds of things to happen.

Here's the greater impression I got from Saturday's game: That increased aggressiveness that Todd Grantham promised us all through the off-season is finally starting to make itself apparent. Against Kentucky, we were better than +2 in turnover margin for the first time all season, and for only the third time in the last three years. We only forced 12 turnovers all of last season; just two-thirds of the way through 2010, we've already forced 15, and are sitting at +7 on the year, a blessed number after last year's wretched -16. And the front seven have been playing unbelievably well lately. Akeem Dent is flying to the ball like a guided missile, and Justin Houston . . . I've heard the voices of more than a few rival fans crack a little when they mention his name. (I wish I could describe to you the smile I get on my face when I hear this; you'll just have to watch this and let your imagination take it from there.)

The yang to the yin, of course, is that with greater aggressiveness comes greater risks, and we saw that Saturday night, as Georgia's relentless blitzing did sort of allow the defensive backfield to turn into a crapshoot. When the pressure worked, our guys paved Kentucky's O-line and made Mike Hartline do something stupid; when it didn't, unreasonably long third downs got converted, and occasionally points were scored. Still, if you'd told me before the game started that the payoff for such pain would be a 41-17 lead that turned the vast majority of the fourth quarter into what the average fan would probably call "garbage time," I'd have taken you up on that offer. If the greater aggressiveness Grantham has already preached to his unit is already paying off this handsomely in more turnovers and sacks, then I'm optimistic about what our D could look like once he's had a chance to refine their technique and minimize some of that risk. 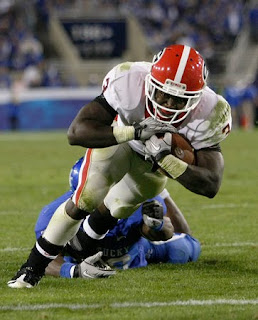 Washaun, the evil brother of Knowshon, hits the mushroom boost and speeds into the end zone.

So now it's off to Jacksonville, where God only knows what's going to happen. Three weeks ago, though, who on earth would've thought that the Dawgs would march into this game matching, if not exceeding, the Gators' swagger (and impressing the oddsmakers enough to be favored by three points)? I was as miserable as any of y'all were when the clock ticked down to 00:00 in Boulder and we put the last bit of frosting on a 1-4 start, but if Tyler Durden really was right all along about how once you lose everything you're free to do anything, maybe this was what it took to get our swagger back and turn back into the kind of team we'd wanted to be all along . . . in which case it just might've been worth it.

But I guess we won't know until Saturday night.

· I never thought I'd be thinking to myself that I'm far more terrified of a Gene Chizik team than an Urban Meyer team, but when you get right down to it, it's not 5-19 Gene I'm afraid of:

There aren't enough jocks in the entire LSU equipment locker to replace all the ones that their players got faked out of on that one run alone. Maybe Auburn gets caught looking ahead to the Iron Bowl in a few weeks and we manage to pull another 2006-style miracle out of our asses, but otherwise I'm thinking we really better beat Florida (and Idaho State, and Tech) if we want to avoid going 6-6 this year.

· Here's a couple questions for you, and feel free to answer honestly in the comments, because I have a feeling my answers are probably the same as yours: 1) Three weeks ago, how much money would you have paid to switch places with the Texas Longhorns, and 2) how badly would you want that money back right now?

· Here's another one: Over/under on a hypothetical Oregon-Auburn matchup in the national championship game -- how high would it have to be for you to take the under? 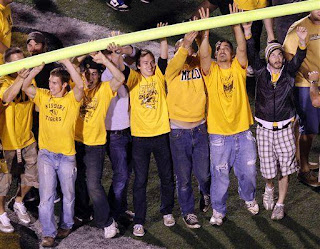 Since I was thisclose to going to Mizzou, I kinda have to feel happy for these guys.

· If the regular season ended today, the Big 12's final championship game would be Missouri vs. Baylor. I'll give you a few minutes to stop laughing.

· UAB Blazers Watch: For the second time in the past month, UAB erased a deficit on the road against an SEC opponent only to fall in the final seconds. It's looking highly unlikely that they'll make a bowl this year, but they're sure playing their asses off. (And yes, it pains me greatly that the Blazers gave State a tougher challenge than we did.)

· Wofford Terriers Watch: A 28-21 win over Elon keeps the mighty Terriers undefeated in Southern Conference play; they'll face the only other undefeated SoCon team, Appalachian State, on Nov. 13 in a game that will more than likely decide the league championship and an invite to the division playoffs.
Posted by Astronaut Mike Dexter at 7:53 PM

Just a couple stats I pulled comparing this year's game from last year's UK disaster. Pretty amazing how much the '09 and '10 games were Bizarro World versions of the other: