Yeah, I don't have much to say about this past weekend except that it sucked, for reasons that only partly have to do with Georgia dropping to 1-4. On the other hand, I did find a bunch of these. So it wasn't a total loss.

· Oregon jumps up to number two after what might have been the most impressive win of the whole weekend -- yes, even more impressive than Alabama stoning Florida in some ways. I mean, Stanford is a really, really good team (I've still got them in the top 10), and not only did Oregon manage to fight back from a sizable early deficit, they absolutely wrecked the Cardinal after halftime. There are only a handful of defenses in the country that would be able to stand up to Oregon's speed and talent for an entire game, and there may not even be that many.

· Below that, it's pretty boring. Ohio State gets edged out of the #2 spot after a lackluster game against Illinois, but Florida and Clemson have the most notable drops of the weekend; everyone else either stays in place or just gets shuffled up or down one or two spots. Just didn't seem to be a lot of surprises in the upper echelon of college football this past weekend other than stunners of the "Wow, Alabama/Oregon might be even better than I thought they were" variety. 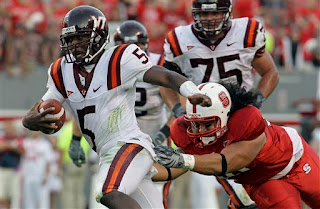 · Oregon State, Wisconsin and N.C. State out, replaced by Kansas State and the returns of Virginia Tech and Florida State. It's really kind of a desert down there: Do I honestly think K-State and UCLA are teams that deserve to be counted among the top quintile of teams in the country? Probably not beyond the next couple weeks at best. If anyone has some better ideas, I'm all ears, but nearly everybody I considered to be "on the bubble" for inclusion last week (Texas, USC, etc.) lost.

1. Alabama -- Have passed what are easily the biggest tests they'll face until a season-ending showdown with Auburn that could be very, very fun to watch.

2. Auburn -- Keep rooting for the Tigers to do well, rest of the SEC -- the better they do, the sooner Gus Malzahn gets hired away for a head-coaching job.

3. Arkansas -- An OK team with an incredible QB.

4. Florida -- Has any year's SEC Championship Game ever looked less exciting? At this point, all we have to look forward to is a rematch (and, most likely, a re-play) of the Gators' drubbing in Tuscaloosa. You always want to be cautious about making sweeping statements like "The West Division has completely eclipsed the East in terms of competitiveness," but for this season, at least, it happens to be entirely true.

5. South Carolina -- By virtue of not playing, had the best weekend of any team in the SEC East.

6. LSU -- This team is like the villain on a particularly tension-fraught episode of "Law & Order: Criminal Intent." I know they're a lousy team, I just can't prove it.

7. Mississippi State -- The close loss to Auburn and the rather-less-close loss to LSU were disappointing, but otherwise this season is trucking along right where we thought it would be for a team that has a decent shot at getting back to a bowl. 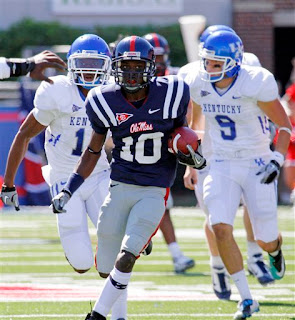 8. Ole Miss -- Still can't stop anyone's passing game to save their lives, but the rest of the squad seems to be picking itself up off the mat after a horrendous start to the season.

9. Tennessee -- The fact that the Vols were even competitive against Florida or in Baton Rouge has to be seen as somewhat impressive, but crawling to six wins is still going to be a monumental struggle.

10. Kentucky -- Well, it's looking like we can throw out that 3-0 start against a trio of snack cakes.

11. Vanderbilt -- Probably not going to come anywhere near a bowl, but I'm still kind of impressed by how Robbie Caldwell has managed to keep his head above water in a difficult situation.

12. Georgia -- A.J. comes back, the offense gets a major spark, and the team still can't get its head screwed on straight? How much worse is this going to get?
Posted by Astronaut Mike Dexter at 12:55 PM