Manic-Depressive Preview: Winning changes everything (except where otherwise noted). 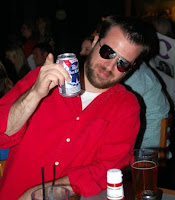 Woohoo! Sweet victory! As you might expect, last week's huge win over Tennessee has completely changed our prognosticators' outlook on football and life -- Manic Doug has been drinking since Saturday night, while Depressive Doug is worrying about . . . well, OK, I guess neither one of them have changed in the slightest. But they still took time out of their busy drinking/kvetching schedule(s) to talk about this week's Vanderbilt game. Here we go:

Depressive Doug: OK, what possible good does it do for you to be yelling in my face right now? You know I'm not a Tennessee fan.

MD: Yeah, but I know there are some out there, and I want to know how they feel being AARON MURRAY'S BIIIIITCH! WOOOOOOO!!!!!

DD: See, this is exactly the kind of hubris I try to avoid when I'm talking about my team.

MD: The kind of fun you try to avoid, you mean. Seriously, we crush Tennessee by four touchdowns and you can't muster even a little trash-talk?

DD: And see, even that felt like too much. 'Cause it's not like our offensive line has been great this season, either, and . . .

MD: OK, seriously, dude, try quitting while you're behind for once. Unless you've got anything witty cooked up for Vanderbilt.

DD: Aside from the fact that they're called the Commodores because the university founder wanted people to call him "Commodore," even though he'd never served a day in the Navy?

MD: OK, well, that's actually a decent start. Run with that. And while you're working on that, I'll introduce this week's Associated Hottie -- news anchor Molly Henneberg, Vanderbilt '95. 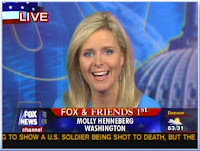 DD: Jeez, what is it with you and Fox News blondes? What about the redhead we used to work with who quit to go to Vandy for grad school?

MD: Who, Claire? Shit, she was hot. You don't still have her number, do you?

DD: You've got plenty of time this week to be a lecherous douchebag. How about you tell me how you think we're going to do against Vanderbilt first.

MD: Oh, that one's easy. Four words: We're. Gonna. Crush. Them. Now can you go look for her number?

DD: Wait wait wait, dumbass, you really think it's gonna be that easy? You have heard that Vandy's no longer an automatic W, haven't you?

MD: What, just because they beat us in 2006? Come on, man. Sure, they play us tougher than they should, but let's get real here -- we crushed them last year when they went 2-10, and they're probably not much better this year. I mean, they've got two wins right now -- a terrible Ole Miss team that lost to a I-AA, and an Eastern Michigan team that should probably be a I-AA. That sound like a juggernaut to you?

DD: No, of course not. But neither did Mississippi State or Colorado.

MD: Forget about them. We were a different team when we lost to them. We've got A.J. back, the offensive line is starting to come together . . .

DD: Why? Because Aaron Murray only got sacked twice against Tennessee? 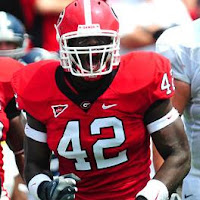 MD: It's not just the offense: The defense even looked better last week. Justin Houston has gone from a dangerous linebacker to a fucking mutant -- he now has the SEC lead in sacks and he had seven hurries against the Vols. If he keeps that up against Vandy, he's gonna be spending so much time in their backfield he's gonna have to have his mail forwarded. And all that worrying you did about Tauren Poole turned out to be for nothing, because we basically turned him into a non-factor.

MD: So does that mean I don't have to hear you talk about how awesome Warren Norman is? Because I know that's what you were going to do next.

DD: Wow. That actually is what I was going to do next. That's kind of scary. But OK, Warren Norman: You really think we don't have to worry about him? SEC Freshman of the Year last year? Averaging 6.2 yards per carry?

MD: Look, he's OK and everything, but if he were really that big a difference-maker, he'd have more than 327 rushing yards after five games.

DD: It's not just him. How about Zac Stacy, who's averaging nearly seven yards a carry? Or Larry Smith, who probably runs better than he throws? Two-headed running threat, mobile QB . . . who does that remind you of? Colorado, maybe?

MD: Yeah, but Colorado had all five of last year's O-line starters returning. Vandy only has one. They're starting a redshirt freshman at left tackle, for shit's sake.

DD: Well, all I can say is I hope the Dawgs' defensive front has improved as much as you say they have.

MD: Look, I'm not saying we're going to shut Vandy out or anything, but you can't honestly think they have the horses to keep up with us on the scoreboard. I mean, Aaron Murray has been great all season, and now that he's got A.J. Green to throw to, he's gone from "promising rookie" to "fucking magical."

DD: No, I agree, he did look fantastic last week. And it's great that he's finally getting to throw to the TEs and fullbacks. I just don't like the idea of depending on him to win the game all by himself.

MD: By himself? Where you getting that from?

DD: You know that Caleb King has been suspended for the next two games, right? And that Carlton Thomas probably isn't going to play because of his hamstring injury?

MD: Well, I guess Washaun Ealey's just gonna have to have a balls-out game, then. Which he should. Vandy's run defense is next-to-last in the SEC.

DD: What I'm worried about is can he even hang on to the ball. 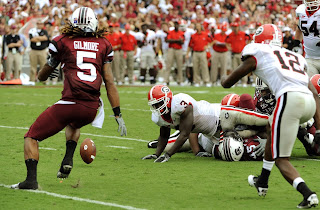 MD: Awww, come on, man, give the kid a little credit. He knows what he's got to work on, and he's due for a big game.

MD: Even if he has an average game, we'll be fine. We only got average production from the running backs last week and still won going away. We're going to run up a bunch more points on Vandy this week because Aaron Murray is a stud and because the Commodores just don't have enough bodies to double up on A.J. Green and account for all the other receiving threats we can put out there.

Meanwhile, on defense, Todd Grantham's going to blitz the ever-living shit out of them, which, given the weaknesses on Vandy's O-line, means we take down their QB at least four times. And if the more physical practices we've been having lately mean that we continue getting better at wrapping guys up and not letting them break free for big runs, Warren Norman isn't going to be a big enough factor to matter, either. Even if we only get a so-so day from Ealey and whoever else we put out there in the running game, I think we win by a score of 34 to 13.

MD: And before you whip out some convoluted excuse as to why Vanderbilt is going to pull out some bullshit win, here's something that might sway you: We're going to be anointing a brand-new official Uga VIII right before the game. Here's the bad little dude Russ is gonna be passing the spiked collar to: 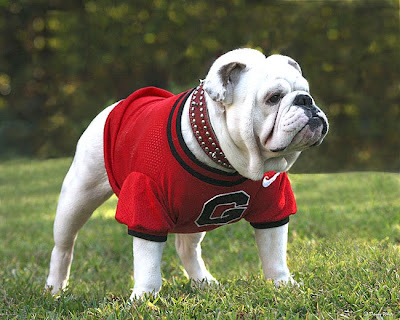 DD: OK, that is a fucking adorable little dog.

MD: Right? Now I defy you to sit there and tell me we're going to lose to Vanderbilt on the day that we crown a new Uga.

DD: All right, I'm not going to tell you that. But I'm not going to tell you it's going to be a pretty game, either. I think our offense is going to stumble without Caleb King on the active roster, and even if Vandy doesn't score a lot, I think they get Warren Norman or Brandon Barden behind us for at least a couple big plays, just enough to keep it close. I think it comes down to us having to hold them off on a last-minute drive to escape with a 24-21 win.

DD: Yeah, well, don't get used to it. You have no idea how hard it is for me to go on record predicting a victory, much less a final score for one. I feel like I'm tempting fate. Like God is gonna smite me, or rather my team, for my hubris.

MD: No offense, dude, but I find it hard to believe God cares about you that much. Now, if we could get away from the theological discussions for just a sec, I'm tallying up our predictions and it looks like they average out to a 29-17 win for the Dawgs.

DD: Hey, if that's what it comes out to, I'll take it. I just don't wanna get my hopes up just because we waxed Tennessee. That's how bad things happen.

MD: You know how else bad things happen? You annoying the shit out of me by being a worry-wart, and also not giving me girls' digits when I ask for them.

DD: Why are you depending on me for phone numbers? And why can't you just let me get an ulcer over my football team in peace?

MD: Fine. You nurse your ulcer, I'll stay busy having, you know, a life. But I reserve the right at all times to scream in your face and act like a fucking loon when we win.

DD: I know I couldn't stop you if I tried.
Posted by Astronaut Mike Dexter at 10:08 PM