Florida just scored all of seven points in a loss to Mississippi State, at home. South Carolina, fresh off a victory over the defending national champions, pooped their pants against Kentucky. Georgia just beat someone 43-0 but still doesn't control their destiny in the SEC East, while they team they steamrolled does. We've replaced the 2010 SEC East with the ACC Atlantic Division . . . let's see if these people can tell the difference!

Compared to the cavalcade of craptacularity the SEC East is experiencing right now, a 65-43 shootout between two West Division teams -- or Ohio State getting all of one week to enjoy being #1 before getting pantsed by Wisconsin -- almost seems perfectly normal. But let's wade through it all anyway.

· The toppling of last week's #2 and #3 teams headlines this week's ballot, with TCU, Auburn, and Boise State all benefiting from the chaos. As for LSU, well . . . I can't believe I'm putting them up there, either, but God seems to really like Les Miles this year, so I guess I should, too.

· Ohio State's loss, in particular, presented a difficult issue because while Wisconsin had done very little up to this point to merit inclusion in the top 25 -- if memory serves, their marquee win coming into last week was, what, a white-knuckle escape from Arizona State? -- they stomped tOSU soundly enough that there was really no way to keep the Buckeyes ahead of the Badgers. So Tressel's boys plummet 14 spots, probably an overreaction that will be corrected in short order, but whatever.

· South Carolina also takes a double-digit thud down to #19, and I thought about keeping them ahead of Arkansas, but the Razorbacks' losses have both come against teams I currently have in the top 10, while the Gamecocks have one loss to a current top-10 team and another to . . . well, Kentucky. The fact that the 'Cocks remain the only SEC East team in the rankings kind of tells you what sort of year this has been for the East.

· Big risers include Wisconsin (obviously) for beating the Buckeyes, Michigan State for probably not getting enough credit to begin with for starting 7-0, and Oklahoma State for beating . . . Texas Tech? OK, not that big a deal, but they're 6-0 and unloading bushel baskets of points on every single team they play; they haven't even come close to tasting the toughest part of their schedule yet, but for now they get a bump. Arizona, too, gets hiked up despite a fairly so-what victory, but their only loss of the season was by two points to a conference rival, so.

· Everybody who got kicked out of the poll this week deserved it for losing, except for Miami -- but if you force seven turnovers and still only beat Duke 28-13, you're really not "applying yourself," as numerous teachers of mine would say.

· Their replacements: Missouri, Texas (whom I still feel conflicted about given that awful UCLA loss, but beating Nebraska earns you some benefit of the doubt), a West Virginia team that's the only remotely attractive squad in a plug-ugly Big East, and Kansas State, who probably doesn't have a single name on their roster you'd recognize but is still hanging in there at 5-1. And they've managed to get there despite a schedule that's a cut above Bill Snyder's usual peanut gallery of D-IAAs and schools whose student bodies were all-female up until a few years ago, so there you have it.

1. Auburn -- Watching Gus Malzahn's offense in action is like watching old footage of atmospheric nuclear tests: It's almost kind of beautiful and awesome, as long as it's happening far, far away from you.

2. LSU -- A month ago, I never dreamed I'd be ranking the Tigers this high. Even this past weekend against freaking McNeese State, they screwed around just long enough to make you wonder what the hell was going on before they finally got into gear.

3. Alabama -- Still not quite sure what's going on with this offense. Even Paul Finebaum has to be concerned that they didn't even drop as many points on a bad Ole Miss defense as Jacksonville State did.

4. Arkansas -- Given how bad the Razorback defense looked the past two seasons, it's almost kind of comforting that they managed not to have a complete defensive implosion until week 7.

5. South Carolina -- Steve Spurrier better hope that the Kentucky game was just a post-upset hangover and not something more. We're all well acquainted with the script this team typically follows in the second half of the season.

6. Mississippi State -- I got the idea pretty early on in the off-season that State might earn a bowl bid this year. I just didn't think they'd have it practically sewn up by Halloween. 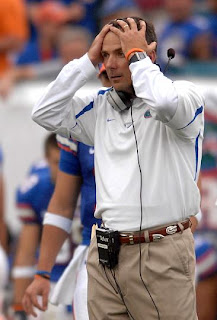 7. Florida -- Before this season, the Gators had only been held to single digits on the scoreboard six times in the previous 19 years. It's now happened twice in the span of three games.

8. Kentucky -- Kind of had to move them back up after earning a transitive win over Alabama, but their victory celebration is going to be short-lived if that defense doesn't tighten up.

9. Georgia -- In the land of the blind, the one-eyed man is king, or can be, even if he lost to Mississippi State and Colorado in back-to-back weeks.

10. Tennessee -- If the Vols continue their season-long pattern of alternating gutsy performances with games in which they completely fail to show up, they're going to give Alabama a pretty good run on Saturday. 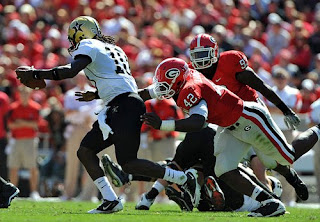 11. Vanderbilt -- Vanderbilt may be a bottom-tier team in the SEC, but it's still been a while since they got blown out that bad.

12. Ole Miss -- They got a new mascot and they beat the spread against Alabama. That seems to be about as exciting as it gets in Oxford these days.
Posted by Astronaut Mike Dexter at 7:13 PM