Poll dancing, week 8: It actually is kind of great to be a Georgia Bulldog at the moment.

A third straight SEC win with more than 40 points scored? Yes siree, I'll take that. And who would've thought, a few weeks ago, that Dawg fans would be looking at Texas, Florida, UCLA, West Virginia and numerous others thinking, "Hooooly shit, I'm glad I'm not them"?

· The biggest changes in the top 10 have to do with LSU and Oklahoma tumbling out of the top 10, making way for, among other teams, a Missouri team that everyone's taking notice of all of a sudden. Did you know that if the season ended today, the final Big 12 Championship Game would be Missouri vs. Baylor? I do, and I find it hilarious.

· Wisconsin also gets bumped into the top 10 thanks to a second straight big win of the magnitude I wasn't sure they were capable of anymore. Is this really the same team that needed a flubbed PAT to beat Arizona State 20-19? 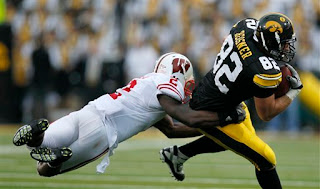 · Other big droppers: Iowa, for losing to said Wisconsin team, and Oklahoma State, though the Cowboys don't drop much after giving Nebraska everything they could handle. Florida State probably shouldn't drop at all, given that they didn't even play this past week, but someone had to make way for Mizzou and Wisconsin, and I obviously couldn't put FSU above Oklahoma, so there you have it.

· Wave buh-bye to Texas, West Virginia, and Kansas State, all of whom lost rather inexplicably on Saturday, but perhaps none more so than the Longhorns. It wasn't just losing to Iowa State at home, it was never really being in that game in the first place. There's absolutely nothing going right with that offense right now, and that's kind of a cardinal sin in the Big 12.

· Replacing them: Miami, Michigan, and Mississippi State. Only Miami actually did something noteworthy this past weekend -- Michigan had a bye, and Missy State needed the full 60 minutes to squeak by UAB. But the Bizarro Bulldogs are 6-2 and might win the SEC East right now, and that's worth something.

1. Auburn -- If you don't have Cam Newton at the top of your Heisman watch list at this point, you haven't been paying attention. 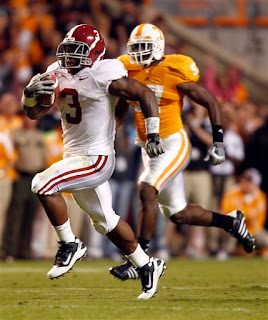 2. Alabama -- Offense seemed to get back on track last weekend, but it was against a Vols team whose defense has really been fading down the stretch. The Tide still have LSU, Mississippi State and Auburn left to go, and I've got a nagging feeling there's another loss waiting somewhere in that bunch.

3. LSU -- The Tigers finally ran into a team even Les Miles Mojo couldn't beat, so of course Miles needs to be fired immediately.

4. Arkansas -- Finally managed to beat Houston Nutt, yet it came despite Ryan Mallett getting outplayed by . . . Jeremiah Masoli? Really?

5. South Carolina -- Yes, Gamecocks, your win over Alabama was huge, but that doesn't mean you get a two-week hangover.

6. Mississippi State -- Speaking of hangovers. Then again, with the Bizarro Bulldogs being bowl-eligible for only the second time this decade, I'll forgive them for not dwelling on that too much.

7. Florida -- Raise your hand if you ever thought people would be saying "I just don't know if Florida's gonna be able to keep up with Georgia on the scoreboard" at this point in the season. 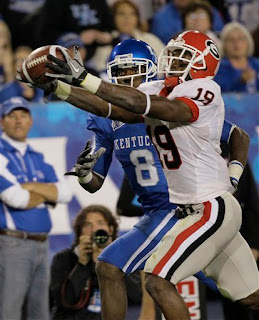 8. Georgia -- I'd dearly love to put the Dawgs ahead of Florida, but look, I didn't just jump on this bandwagon yesterday. I've been at this long enough to know how the script usually goes when the Cocktail Party comes around.

10. Vanderbilt -- Raise your hand if you ever thought the Vandy-South Carolina game would be a battle for first place in the SEC. OK, seriously, put your hands down.

11. Ole Miss -- Ole Miss rises a spot not because of anything particularly wonderful they did Saturday, but mainly because Tennessee looked that bad.

12. Tennessee -- Before the season, I thought Tennessee would at least make it to 6-6, even with their depth issues. Now I'm wondering if they'll run out of players before they even get to win number three.
Posted by Astronaut Mike Dexter at 7:10 AM

I don't get it. I hate Auburn as much as the next guy, but shouldn't their three wins over ranked teams count for more than Oregon's one?