So I was up in Tennessee this past weekend, getting a firsthand look at the Tennessee-Florida rivalry with Holly and Spencer (and, of course, catching just enough of the Georgia-Arkansas game to know what it feels like to have one's heart ripped out of one's chest while still fully conscious). Holly had her future sister-in-law's bridal shower to attend Sunday afternoon, so she said I could either stick around in Knoxville and ride home with her or ride with Spencer and get home early. Holly's brother's fiancee is a lovely girl, but showers of any kind, be they bridal or baby or whatever, peg my personal Fun-O-Meter right down around "receive prostate exam from doctor with very cold hands" territory, so I said I'd hitch a ride with Spence.

Five miles or so north of Cartersville, Georgia, right after we'd been blown past by three Clemson coeds in a yellow Mustang convertible with the vanity plate "TOPL1SS," Spencer's car decided to die from embarrassment and give up any ambitions of traveling faster than 20 miles an hour on I-75. We pulled over onto the shoulder and called a tow truck, and because the tow truck didn't have enough room in the cab for all of us and the two dogs I'd brought up to Knoxville, they got to ride in Spencer's disabled Honda on the back of a flatbed. Here's Jenna, wearing her DUDE NO SERIOUSLY WHAT THE FUCK IS HAPPENING expression as the car is hoisted aboard: 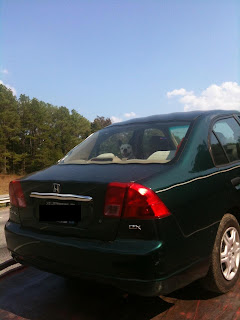 So we made it back to Decatur about an hour and a half late, where Spencer's better half was waiting for us with Red Bulls and a thermos of vodka. And I got home, and the Redskins lost in overtime after blowing a 27-10 second-half lead to the Texans, and that's that.

How was your weekend?

· Yup, it must be Pac-10 Week up in this ballot, as Arizona and Stanford ride perhaps the two most impressive victories of the weekend into the top 10, joining Oregon's point-a-minute squad. The Pac-10 was pegged as one of the weaker BCS conferences in the preseason, but between these three teams and Oregon State, who frequently seems to take a while to get rolling but has as much raw talent as anyone in that league, the race for the Rose Bowl could be very, very fun to watch this year.

· Iowa takes a hit for nearly putting poor Ricky Stanzi in the hospital thanks to the Hawkeye O-line's horrendous breakdowns toward the end of their upset loss to 'Zona, and yes, the Wildcats are a good team, but that kind of pass protection isn't going to get anyone very far in the Big 10 this year. Nor will Oklahoma's schizophrenic defense get them anywhere near the national championship game if they keep this up.

· I'm feeling Texas more than I was previously -- OK, yes, that defense is just plain unfair -- but I'm still not sold on the offense. I have a feeling they're going to need to put more than 24 points on the board to beat the Sooners or Cornhuskers. 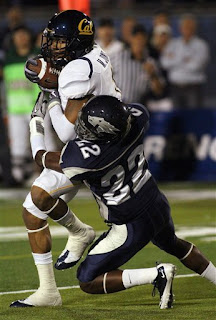 · California takes a precipitous drop thanks to getting pasted by Nevada on Friday night, further cementing my suspicions that Jeff Tedford is not actually a human but a robot who missed getting a critical software update sometime back in 2007. Michigan also takes a steep fall after proving pretty conclusively to the world that they're going to have to win every game this season by a score of something like 45 to 41, and seriously, whoever's bright idea it was to start putting D-IAAs on the Wolverines' schedule just needs to cut that shit out.

· Welcome Nevada, Clemson, and Michigan State, and yes, Clemson gets in there despite losing, because they looked way better than I thought they would and lost to Auburn on a very horrible bit of bad luck, and who else am I gonna put in there, anyway.

So there's that, and here's the SEC Power Poll ballot for this week:

1. Alabama -- Laugh if you want, but that was a pretty good offense that the Tide D completely stuffed in Durham. Still can't find any real reason not to call these guys the best team in the nation. 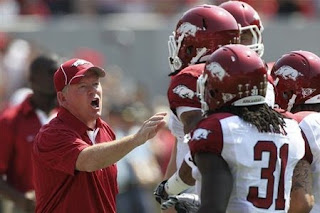 3. Arkansas -- Still don't know if I'd call their defense SEC-championship caliber, but it looks improved enough to earn a pretty decent bowl bid, if nothing else.

4. Florida -- This weekend's game at Alabama will show just how far the Gators can get with their still-not-quite-fully-baked offense.

5. Auburn -- Weird (and incredibly hard-hitting) game Saturday night, one Auburn was very fortunate to survive with a win. It'll be interesting to see how this affects their play over the next couple weeks.

7. Kentucky -- That #2 ranking in the SEC in total offense won't last once they start playing real teams. The #10 ranking in run defense, though, just might. 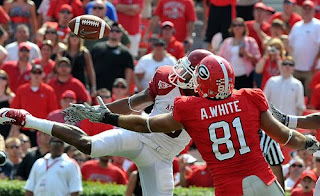 8. Georgia -- It's gonna be hard for this offense to accomplish anything of note if the coaches can't find a setting for Murray other than "do absolutely nothing" and "carry the entire team on your back."

9. Tennessee -- Like last year, they're going to have to content themselves with a lot of moral victories. Unlike last year, it doesn't look like that's what they're playing for.

10. Vanderbilt -- Vandy now has a better SEC record than Georgia, Tennessee, or Ole Miss. Oh, hey, good for them.

11. Mississippi State -- Look on the bright side, State fans: With Mullen at the helm, it now takes two QBs to throw five picks in a single game.

12. Ole Miss -- It's a damn good thing for the Rebels that the NCAA doesn't have English Premier League-style relegation, or they'd be sewing "C-USA" patches onto their jerseys right now.
Posted by Astronaut Mike Dexter at 6:40 PM

Love the pic of Jenna, that was my first honest laugh since my heart was ripped out Saturday by those stinking pigs. Thank you!

"Still can't find any real reason not to call these guys the best team in the nation."

While you probably meant to say the best college football team in the nation, the way it is written may well be correct. They play as though they know what they are doing. They showed great restraint keeping it at 24 against PSU, but never let PSU think they really had a chance. It's eerily business-like. I am not too proud to admit that I am jealous of them.

For the record, I didn't ask him to come to the bridal shower (you ain't invited, boy-person!), and in fact offered to drop him off at Hooters or someplace on my way. COME ON BOO.