Poll dancing, Week 1: That was fun, now let's blow it all up.

Some people think the preseason BlogPoll ballot is the hardest one to come up with. I think that's the easiest one -- after all, if nobody knows anything about any of the teams, it's easy to just make some shit up and act like you know what you're talking about. The hardest one to come up with is the ballot immediately following Week 1, when everyone's played one game -- but only one -- and you have to figure out what to make of it all.

It's been particularly hard this week, as some preconceived notions have crashed headlong into some very odd on-the-field results. Like, do I give Florida the benefit of the doubt for being a bona fide juggernaut over the past three or four seasons, or do I rank them based strictly on the quality of their opening-day performance against Miami-Ohio (or the complete, utter, festering, feces-redolent lack thereof)? Do I rank South Carolina based solely on my impression of their dominating performance Thursday night, or do I stick with the reputation they have dutifully constructed over the years as a team that, at some point later on in the season, will not just shoot itself in the foot but blow both of its legs off with a grenade?

Eventually, what I decided to do was more or less throw out the preseason ballot and start all over again. I'll do my best to explain the thought process that went into it below, but I can't promise anything. Here we go . . .

· No real explanation for how Oregon and Nebraska jumped as high as they did; I guess they just looked more impressive against their scrub opponent than the rest of the top 15's scrub opponents. 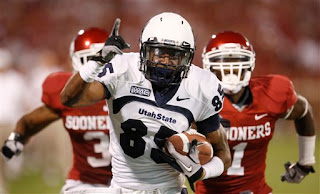 · I can, however, explain how Oklahoma and Florida fell as far as they did -- they both played like stale ass, Oklahoma on defense, Florida on offense. It may not surprise you to find that the Sooners, who this past offseason hired Willie Martinez to be their secondary coach, got torched through the air by a Utah State team that has averaged three wins a season over the past 12 years. It should, however, surprise you to hear that the mighty Florida Gators had all of eight net yards at halftime against Miami-Ohio. Eight! Look, I feel for John Brantley having to replace a legend and all, but there are first-game jitters, and then there's having eight total yards in a half against a MAC team.

· Auburn, meanwhile, is probably just a correction for having them too high in the preseason. They may yet be better than last year's team, but if their defense hasn't improved at all, that advancement is going to be incremental at best.

· Please welcome South Carolina, Utah, and Florida State to the poll. All of these are probably overreactions to positive opening-weekend results of varying degrees of relevance, but hey, that's what makes Week 1 fun. We're all still giddy on the sugar high of having actual football back, after all.

And here's the opening SEC Power Poll ballot of 2010, results of which will, as usual, be posted at Team Speed Kills on Wednesdays: 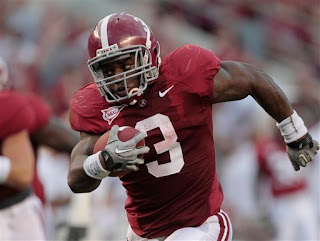 1. Alabama -- If the defending national champs do indeed have any chinks in their defensive armor this year, San Jose State certainly didn't expose them.

2. South Carolina -- For years the Gamecocks have buried some promising talent behind a shoddy offensive line, but if that line can get its act together -- as it appeared to be doing Thursday night -- look out.

3. Georgia -- The Bulldogs came into their 2010 opener with a laundry list of questions and answered all of them except one: So y'all gonna be able to do that against a legit SEC team?

4. Arkansas -- Speaking of defenses with some room to improve after 2009: Arkansas looked pretty good on Saturday, but they did allow the Golden Eagles a field goal. Georgia shut out TTU last year, and our defense was terrible. I'm just saying, Razorbacks. 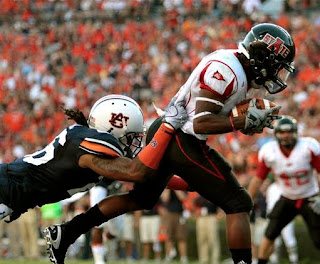 5. Auburn -- Not exactly a dominating performance by the defense to open Gene Chizik's second season on the Plains, but with Cam Newton as their QB, it may not matter.

7. LSU -- That game in the Dome was what you'd call a "Pyrrhic victory," folks -- shut out in the second half by UNC's bench, more than 400 passing yards given up to what was one of DI-AA's worst offenses last year. I don't think the clock is ticking any less quickly on Les Miles' tenure.

8. Mississippi State -- Sure, it was just Memphis, but you want to know the last time Missy State scored 49 points on anyone? September 14, 2002. (And here's the fun part: It was in a victory over Jacksonville State.) 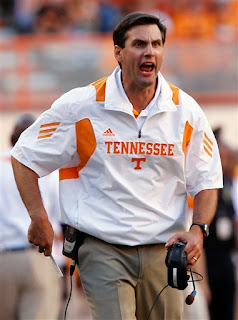 9. Tennessee -- This is modern life as a Tennessee fan, apparently -- beat a scrub opponent 50-0, and before anyone even has a chance to enjoy it, release the laundry list of guys who got injured and won't be playing the following week.

10. Kentucky -- Started strong against Louisville but sure seemed to run out of intensity in the second half. Hartline had an efficient day, but Derrick Locke and Randall Cobb are still the only ones on this offense who are going to be giving sleepless nights to any defensive coordinators.

11. Vanderbilt -- For a team that has only one remotely secure win on its schedule this year, Vandy gave Northwestern all they could handle. That said, see first half of first sentence.

12. Ole Miss -- Here's the thing, Rebels: If you sit down at the table with Jacksonville State and you can't spot the sucker in 30 minutes, you ARE the sucker.
Posted by Astronaut Mike Dexter at 8:28 PM