Yes, Georgia falls out of the rankings this week, but you know what? I'd rather fall out because of a road loss to a South Carolina team with a manbeast running back than to a I-AA team, a team that lost to a I-AA team, or in any other combination of circumstances in which a lack of ability to compete with D-IAA teams is either proven or implied. So if you want to know why I'm suspiciously non-suicidal this week, well . . . that's pretty much it.

· The top 10 remains pretty static except for the return of Oklahoma, who remembered how to play pass defense last week (who knew Willie Martinez was such a quick study?), and the arrival of South Carolina (for reasons that should be fairly obvious) and California. Below them, there's a trio of SEC teams who still might not be any good but, alternatively, could be fabulous. I think I'm comfortable with Auburn's placement -- not top-10 caliber, where I had them in the preseason, but still pretty good; not so sure about Arkansas, who has played no one, or Florida, whose "Let's manage to win by three touchdowns despite looking as lousy as possible" game plan is, in its own way, really a work of surrealist art. But there they are. 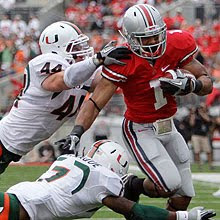 · Droppin' big: Penn State and Miami. I suppose I should give them more credit for at least having lost to stellar teams, but from everything I've heard, the only thing keeping State from getting rocked much, much worse was Nick Saban's belief in respecting one's elders. Miami, meanwhile, scored only 10 offensive points and will remain at the mercy of Jacory Harris's feast-or-DERP passing skills until further notice.

· That'll still be good enough to win the ACC, though, from the looks of things. Virginia Tech? Buh-bye, but good luck in the FCS playoffs. Georgia Tech? Buh-bye, but thanks for making me feel that much better about my own defense's struggles in adapting to the 3-4. Florida State? Ehh, never had much faith in you guys anyway. If anyone can give me a concrete reason why Wake Forest isn't the class of the ACC Atlantic at the moment, I'm all ears.

· Still not feeling Wisconsin or Texas, either. That's a combined four games against crap opponents and a combined 0 point spreads covered. I'm not at all convinced that either one has a free ride through their conference schedule.


1. Alabama -- A while back, some people laughed when I said I didn't think Bama's defense would fall of that much despite losing nine starters. It seems like people are laughing a lot less these days. 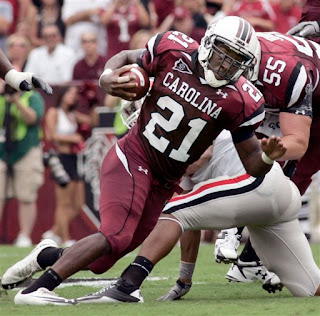 2. South Carolina -- I will handsomely reward anyone who can produce an authentic Whitney Hotel bill with Marcus Lattimore's name on it.

3. Florida -- Certainly looked better than they did in Week 1, but they were still tied 7-7 at halftime against a team with a middling-at-best defense. Against the better teams on their SEC schedule, they're not gonna be able to just let their superior depth carry the load in the second half.

4. Arkansas -- Not exactly an inspired performance against ULM -- were they looking ahead to Georgia, perhaps? I guess I should be flattered that Georgia is still a look-ahead-worthy program these days.

5. Auburn -- Showed that their defense can step up when the opponent is fairly lo-cal, but also showed that even a Gus Malzahn offense can be contained. 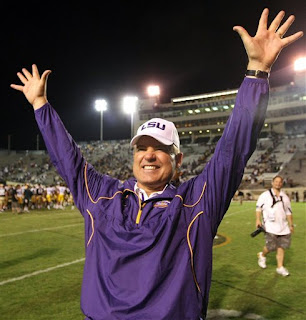 7. LSU -- South Carolina wasn't the only team that found a star running back on Saturday, but the Bayou Bengals still might be the sloppiest 2-0 team in Division I-A.

8. Kentucky -- The win over WKU was no less of a blowout than anyone expected, but what the hell were they doing letting a Hilltopper RB go off for 184 yards?

9. Mississippi State -- Gave Auburn just about everything they could handle but still don't quite have the horses to run the kind of offense Dan Mullen would like to run.

10. Tennessee -- If the rest of the SEC wasn't afraid of Tauren Poole before, they should be now. But that might be the only guy on the Vols' offense they should feel that way about. 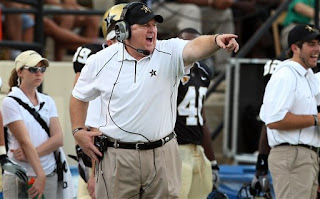 11. Vanderbilt -- Commodores hang tough for three quarters, only to wilt in the final 15 minutes and allow a close game to look worse than it actually was . . . Robbie Caldwell has certainly absorbed the Vandy playbook, at least.

12. Ole Miss -- Sorry, fellas, but if you can't even cover a spread on Tulane, you ain't getting off the hook for losing to Jax State.
Posted by Astronaut Mike Dexter at 1:23 PM