The Friday Random Ten+5 does not touch that dial.

As much as I love summer, there are three big reasons I love it when fall is about to arrive: 1) football season starts, 2) the weather cools off a bit, and 3) the new TV season starts. Since last night was the season premieres of "Community," "30 Rock" and "The Office," I declare that the official beginning of the new season, and it was everything I dreamed it could be: Betty White drinking her own urine, Matt Damon weeping about "grown-up love," and Steve Carell spanking his nephew. If you didn't watch (or don't watch) any of those shows, you probably don't have any idea what I'm talking about, but you can still revel in this week's +5: The Five TV Shows I've Most Looked Forward To At Various Points In My Life (Besides "30 Rock," Of Course). 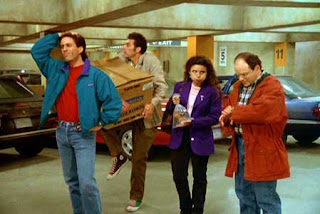 "Seinfeld" (1989-1998)
When I say "the shows I most looked forward to," I don't mean the best shows I ever watched, or even the ones that I consider my favorite now -- I mean the shows that most firmly planted themselves in the category of "appointment viewing," the shows I did the most work to rearrange my schedule around. "Seinfeld," though, was appointment viewing, and one of the best shows, and one that's still one of my favorites even today. I think the thing that was so groundbreaking about it wasn't that it was "about nothing" -- or maybe it's more correct to say that when people talk about it being "about nothing," what they really mean is that the characters learned nothing as they went from one episode to the next. Refreshingly, there were never any tearful heart-to-heart talks or climactic speeches in which the moral of that week's episode was revealed; the characters acted crazy, they were horrible to one another, the story ended and they were just as crazy and horrible to one another the following week. Jerry was still a sarcastic guy who couldn't stay interested in the same woman for more than a couple dates, George was still a neurotic douche, Kramer was still a "hipster doofus" (and, later, a horrible racist). In its own way, it was indeed the show of its time, mirroring a society that gleefully stumbled from one misadventure to the next remaining defiantly resistant to learning anything from what they'd just put themselves (and others) through. And also my chemistry teacher from my sophomore year in high school, Mrs. Summers, and I bonded over it and she gave me a Snapple on the last day of school that year. "Knight Rider" (1982-1986)
Important for three reasons: One, it was the very first show I can remember deeming "my favorite"; two, it taught me that Cars Are Awesome; three, it prompted my very first celebrity crush that I can recall -- on Rebecca Holden, who played April, KITT's chief mechanic, in the second season. To this day I can't participate in the public razzing of David Hasselhoff nearly as lustily as the rest of society; he gave me so much, man. 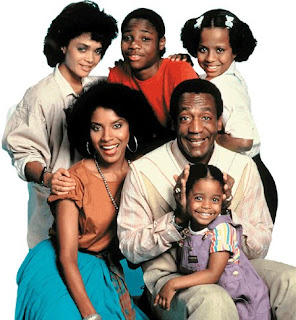 "The Cosby Show" (1984-1992)
You know what's weird about this program? At the risk of sounding like I'm trying to retroactively build up my White Liberal Guilt credentials, I and pretty much every other kid in my class from third grade through fifth or sixth made this show "appointment viewing" on every single Thursday night, and yet it never occurred to any of us that it was a "black show" or that the characters were any different than we were. Fifty years from now, we may be looking back on this show and realizing that it had a more profound (if less immediately apparent) effect on race relations in this country than Rodney King or the election of Barack Obama. (Of course, Bill Cosby would probably call me an idiot for even mentioning any of this, and he may not be wrong.) 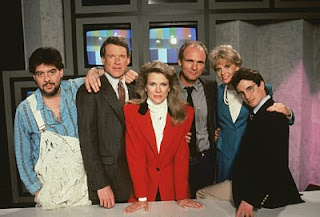 "Murphy Brown" (1988-1998)
Two things I knew even when I was only in junior high: Candice Bergen was hot, and Dan Quayle was an idiot. One thing that went right over my head, though, at the time: People who go into journalism as a career become bitter, romantically unlucky ex-alcoholics, and that's a best-case scenario. There was a lesson there if only I'd bothered to pay attention to it. 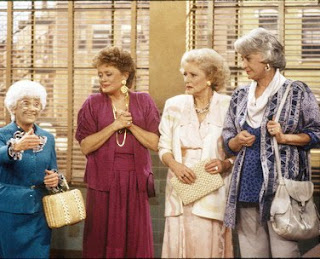 "The Golden Girls" (1985-1992)
This show was actually appointment viewing at two points in my life: the first time when it was on its initial run, and the second time during the summer before my senior year of college. I hadn't been able to nail down an internship for that summer, so I stayed up in Athens with a skeleton crew of fellow Red & Blackers who cranked out the weekly edition of the paper during summer semester. Each Wednesday, we'd stick around at the R&B offices until the thing was finally put to bed, then convene at a friend's apartment and drink grape Kool-Aid spiked with Golden Grain while we watched "Golden Girls" reruns. The drank, of course, soon acquired the nickname "Golden Girls Kool-Aid," and once we'd lubricated ourselves with enough of it, we headed on down to Boneshakers for '80s night. And yeah, you're remembering correctly, Boneshakers was a gay club, but on '80s night there was a pretty much equal mix of gays and straights, all of whom were welcome to dance like complete douchebags to songs like "Don't You Want Me," "A Little Respect" and "The Glamorous Life." Man, those were some good times. Boneshakers closed down a few years ago and is now something else; somebody needs to bring that place back.

Your own most eagerly anticipated television shows, along with your Random Tens, are welcome in the comments.

Revisited the summer before my senior year at UGA with Golden Girls Kool-Aid and trips to Boneshakers
Posted by Astronaut Mike Dexter at 7:39 AM

Clearly I should have watched Murphy Brown before applying to Grady. Now I'm just a romantically-challenged, alcoholic, unemployed writer at the young age of 26. Nowhere to go but...shit.

Also, I love that you brought up Boneshakers- I used to go to 80s night ALL THE TIME!

Best Seinfeld line ever: "...I gotta go hose the puke off the floor of the bus." (episode?)

Just last week, I used this classic Cosby Show line on my kids: "Your mother and I are rich. YOU have nothing!"

The Simpsons was never appointment viewing for anyone else?

Are most of the site's readers a lot younger than I thought they were?

Will, no. In college we would skeedaddle from the dining hall back to the dorm room of the one person who had a tv (me!) and watch "Bart" as we called it on rabbit years while munching on whatever we managed to smuggle out of the dining hall. Typically this was tea and cookies (one of my roomies was Irish).

When I was in middle school I never missed "Miami Vice." That's almost embarrassing now. And prior to that it was "Friday Night Videos." FNV was NBC's answer to MTV (back when MTV showed music videos and not everyone had cable). The last program I can recall being so addicted to that I made sure to watch it when it came on was... um... I don't recall. Honestly, I have no idea. When I would have watched a lot of things I was living in Sweden and I didn't have any favorites there. Now, I have tivo. "Three Sheets" was the last program which I had it record automatically, but I lost my taste for it after I saw Zach Lamprey live.

The thing about "The Simpsons" is that at any given time of the day, you can find an episode on in syndication somewhere. That makes it a lot harder to qualify it as "appointment viewing" (though I did watch it fairly religiously in high school).