Poll dancing, week 4: In which I dig deep, rise above it, yada yada yada.

As hard as it was to even think about football after watching my beloved program get tipped over a cliff in Starkville on Saturday night, I'm muddling through. "Muddling" being the operative word, as you'll see below.

· A little bit of a shakeup in the top 10, but Alabama and Ohio State hold on to the top spots. Stanford jumps ahead of TCU after the Horned Frogs got chased just a wee bit too long by SMU; Florida is back in the top 10 for looking like, well, Florida. Arizona's offense and Oregon's defense earn them slight drops, but they're still top-10-worthy. Don't know why Nebraska only managed 17 points on a I-AA team at home, but they get to stay in the top 10 for now. 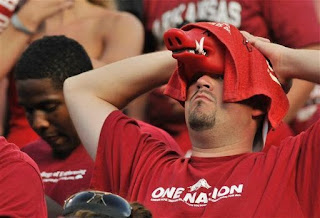 · Arkansas and Oklahoma both drop three spots, which I guess means that losing to the #1 team in the country is exactly as embarrassing as only beating Cincinnati by two? That doesn't sound right. I briefly considered keeping Arkansas at #10, but they need to drop at least a little bit until they prove that Ryan Mallett's brain-fart habit in big games has been cured. As for Oklahoma, who knows. I guess there's a case to be made that they're worse than Auburn or South Carolina, I'm just not prepared to make it quite yet.

· LSU, N.C. State, UCLA and Wisconsin are all in this week. I'm not 100-percent sold on any of them, but I guess the 20s are an appropriate neighborhood for flawed teams who still managed to win games of relative bigness over the weekend. Well, the first three, anyway. Wisconsin dropped 73 on a bad I-AA team, which seems kind of rude (and not terribly important), but at the same time, this is the first time all season that they've managed to completely put away a shit opponent, so kudos, I guess.

· It hurts, but Texas is out. You'll recall that I was highly dubious on their offense at the start of the season, and if only scoring 12 points on a team whose coach was recently being openly booed in his own press conference doesn't prove me right, I don't know what does. Hurts to lose Penn State, too, but they've only looked good against Youngstown State this season, and that just ain't good enough. Cal and Pittsburgh, of course, I have no qualms about whatsoever.

The SEC Power Poll ballot is as follows:

1. Alabama -- Started showing the first cracks in their supposed invincibility against Arkansas -- and yet that young, inexperienced defense still managed to make every big play when they absolutely had to. The proposition that they're not actually the best team in the country is a little stronger now, but I'm still not convinced it's the winning case. 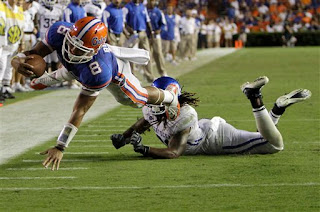 2. Florida -- It's taken a while, but the gears have slowly ground into motion and the Gators are looking much more like the team we expected them to be in the preseason. We should find out conclusively next week whether that improvement has just been a mirage.

3. Arkansas -- Even as someone who wasn't even remotely buying Arkansas in the preseason, I gotta say there's not that much shame in losing when you still managed to lead the #1 team in the country for all but eight minutes of the game.

4. Auburn -- You could look at the South Carolina win as yet another stroll across thin ice, or you could be impressed by how well they performed in a situation where they shouldn't have had anything left in the tank after the Clemson game. I'll go with a little bit of both, though I don't know how many fourth-quarter comebacks they'll be able to pull out of their quiver once the conference race really heats up.

5. South Carolina -- To me the loss to Auburn doesn't tarnish their rep nearly as much as the fact that Marcus Lattimore's big "breakout game" happened against a team that's currently 0-3 in the SEC -- and that he hasn't come close to hitting that mark since. 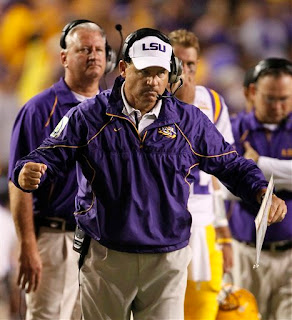 6. LSU -- What Kramer was to "Seinfeld," LSU has become to the SEC: strange, spastic, only intermittently competent, yet has an uncanny knack for falling ass-backward into awesome situations.

8. Mississippi State -- Took control of the trenches and imposed their will on a Georgia team that had the edge in talent and was desperate for a win. There's a bowl bid in this team yet.

9. Tennessee -- Followed the same script we saw against Oregon and Florida: Started off strong, but found themselves getting increasingly desperate once their lack of depth started making itself apparent in the second half. But it's one thing suffer that against the Gators -- how many wins can this team really have left in it if that's happening against UAB? 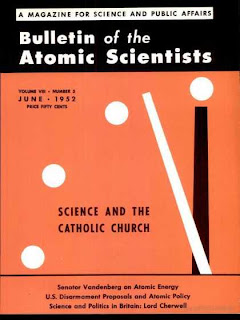 11. Georgia -- The Bulletin of the Atomic Scientists regrets to inform you that they have advanced the Mark Richt Job Security Doomsday Clock to four minutes to midnight.

12. Ole Miss -- Dropped a double-nickel on a middling WAC team but still not displaying anything resembling defense. If you can find an SEC win on their schedule, you must've been looking a lot harder than I was.
Posted by Astronaut Mike Dexter at 6:44 AM

As a Michigan fan, I am uncomfortable being ranked that high. We're really not very good, though Denard is pretty awesome to watch. 4-4 is the best case in Big Ten play.