The Friday Random Ten+5 gets wistful about ground beef.

So two days ago was Ash Wednesday, when dirty Papists like Yours Truly went to church to get a right good humbling (both from the priest who reminded us that we're all going to return to dust and the random pedestrians about town who were like, "Ew, what's that thing on your forehead?"), marking the start of Lent for another year. The list of stuff I'm giving up this year is pretty much the same as last year's, with one change -- I'm giving up red meat instead of heroin. (Oh, I gots to have my sweet, sweet heroin.)

That's actually not a huge sacrifice for me in the grand scheme of things, since I don't actually eat that much red meat unless I'm going out to a restaurant or something. On the other hand, I do have to walk by a Ruby Tuesday on my way home from work every day, and resisting the fragrant lure of Ruby Minis and onion straws wafting out of that place is gonna be a challenge. Just to torture myself, this week's +5 is the Five Best Burgers I've Ever Had In My Life. 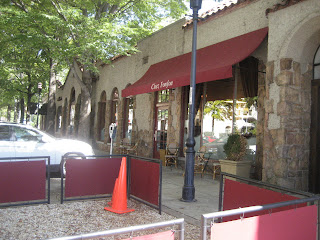 Chez Fon Fon, Birmingham, Alabama
This is one of three restaurants in town run by world-renowned chef Frank Stitt, and it might sound like kind of a foofy place to get a burger, of all things, but I promise it's worth it. This is where I went Tuesday night to enjoy a last evening of gluttony and decadence before Lent started -- cheeseburger, French fries (which are also fantastic there), and a steady stream of vodka martinis. One of the best hangovers ever. 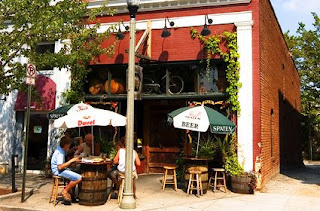 Brick Store Pub, Decatur, Georgia
Listed as one of Forbes magazine's "Best American Beer Bars," and not without reason: They have a list of high-alcohol-content Belgian beers that runs into the hundreds, along with a Scotch list that's nearly as long. But they also have a pretty good selection of pub food, including a juicy cheeseburger served on challah rolls handmade by angels. 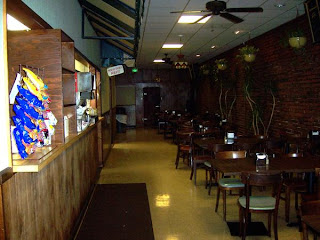 The Burly Earl, Birmingham, Alabama
This place is right down 7th Avenue from my office, and sadly, it appears to have closed -- whether just temporarily or for good, I don't know, but either way it's kind of hard to figure since this place always seemed to be packed at lunchtime. Their very simple, no-nonsense bacon cheeseburger is/was an excellent hangover cure, and their steak fries aren't bad either.

Cavalier Store, Lynchburg, Virginia
The overwhelming majority of the reviews I saw of this place on the Web bemoan its stand-offish, sometimes surly service, which kind of made me laugh -- it can be kind of intimidating if you're wandering in there for the first time, but if you've lived in Lynchburg for a few months and have achieved the status of "regular," the staff is perfectly fine and will take care of you in a hurry. Fantastic burgers, steaming-hot potato wedges (which are great with ranch dressing), and they also had a few pool tables where I spent many, many hours in 1999 and 2000, guzzling cheap beer and trying to forget that I lived in Jerry Falwell's backyard. 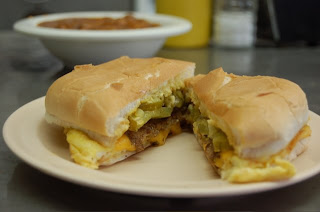 Texas Inn, Lynchburg, Virginia
Right down Rivermont Avenue from the Cavalier, just on the edge of downtown Lynchburg, is a goofy-looking blue-roofed building called the Texas Inn, which is not a motel but rather a diner-style restaurant that serves up one of the greatest innovations in burger history: the Cheesy Western. The Cheesy Western is about the size of a regular hamburger from McDonald's, but it has a slice of cheese, a dollop of hot onion relish, and -- the crowning touch -- a fried egg on top. On fall weekends in the L-boogie when I had nothing to do but sit around and watch football, I'd head to the Texas Inn (or the T-Room, as the locals called it), pick up a couple Cheesy Westerns to go, grab a six-pack on the way home, and consume the whole lot of it in front of a steady stream of games on TV. I shudder to think of how many calories I consumed per sitting doing that, but that was back in the days when I was running four miles every morning and wasn't the lazy tub of goo I am now, so I don't feel too guilty about it.

Did I leave any vital burger joints off this list? Let me know if I did (and put your own Random Tens in the comments while you're at it).
Posted by Astronaut Mike Dexter at 8:35 AM

No burger is quite as exquisite as the Bacon and Swiss and/or Big Molly at 2:35am at the Grill served with a heaping side of crinkle fries and feta dressing.

The "Coronary Bypass" Burger at the Vortex in Little Five Points, Atlanta ain't too shabby. A bacon cheeseburger with all the trimmings including a fried egg. Don't forget to order tater tots instead of fries.

Best burgers I've ever had were at Market St. Tavern in Chattanooga, TN with olive-oil fried chips and blue cheese crumbles, and Indian River Raw Bar near Appilachicola, FL, which seems strange considering they serve the burger with a side of a few crab-stuffed shrimp, but damn was it so simple and pure.

I'm giving up fried food again this year, with a focus on working out 6 days a week again.... did that last year and lost 16 lbs. I've gained it all back since, of course. On Tuesday I celebrated with whole fried catfish, sweet potato fries, and cole slaw. Man... I already miss fries.

I remember driving HOURS out of our way on a DC road trip to Lynchburg to get the Cheesy Western. You were right, it was so worth it.

My only complaint is, how could you leave off the Ghetto Burger from Ann's snack Bar?

Aside from The Grill - Clocked! and Blind Pig have the best burgers in the Classic City. The best burger I've ever had not in the state of Georgia was in Virginia, but in Richmond at Carytown Burgers and Fries.

2nding, 3rding, and 4thing the Vortex, although the Coronary Bypass is child's play compared to the Double Coronary Burger, which is "Topped with two fried eggs, four slices of American
cheese, and 5 slices of bacon, with two grilled cheese
sandwiches replacing the buns."

My faves are the Rajun' Cajun and Black and Blue Burger. And yes, you must go with tots over fries.

Another vote for The Vortex! (And really, don't forget the tater tots!)

(We personally prefer the Midtown location because we can walk there from home.)

This is going to make me sound like an asshole (even more than my railing against home ownership!), but York Street in Dallas, TX. Lamb sliders with carmelized onions and red pepper ketchup. I'm not sure I've ever eaten anything better.

Good list. Had the Fonfon burger last night. Still the best in town!

ZOMG Vortex. I've never missed Atlanta in my entire life, but I do now.

The best burger I ever had was in your old town of Johnson City at the Horseshoe Lounge. It's a biker bar near the VA where they search you for weapons when you come in and if you don't have any on you they will loan you some of theirs. Had your folks taken you there when you were a child in JC they would have been prosecuted for abuse, or at least child endangerment.

But a damn fine burger, usually served by a waitress with no teeth and so wide that if she ever had to haul ass she would have had to make 3 trips.

Off topic, but don't you wish you had a job that gave you these business cards...
http://www.neatorama.com/2009/02/26/lego-minifigs-the-best-business-cards-ever/

True story, Dirty Papist: I grew up, largely, in the rural areas of NC and Alabama (and didn't even move to Tuscaloosa until I was a sophomore in HS) e.g., a shitload of baptists, etc.
So, imagine my surprise when I go to my Wednesday night bio lab class, freshman year at UA, and tell my lab partner: "hey, did you know you've got some dirt smeared on your head", as I'm reaching over to wipe it off for her.

These small burger businesses are doomed at the hand of this dimwit:

Wow. I've written posts about football and gotten political comments; I wrote a post about my dad going into surgery for a near-total arterial blockage and someone left a snarky political comment; now I've written a post about my favorite burger joints and some right-wing whiner has popped up on here to try and tie that into how the Obama administration sucks. Incredible.

Please, anonymous, I implore you, take a step back sometime and drink in the full awesome grandeur of what a poor, dumb, bitter loser you are. Seriously, you sound like the kind of ninny who grouses about the left-wing bias of airline magazines. In the immortal words of Patton Oswalt, "You're gonna miss everything cool and die angry."