Like a never-ending pasta bowl of angst, shame and recrimination, the Olive Garden Confidential series rolls out with another lost tape, this one called "Control." 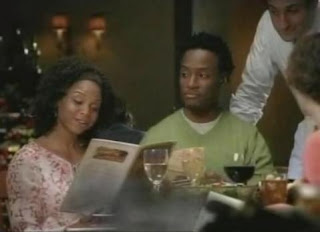 TONY: Soooo I could sit here and try all 42 pasta and sauce combinations.

WAITER: Eh, you could.

ANGELA: You better not.

(laughter, except for TONY)

TONY: Jeez, I wasn't actually gonna sit here and eat forty-two bowls of pasta. (to PETER) She's been like this ever since D.J.'s bachelor party — can't even get a single sentence out without her jumping down my throat.

ANGELA: Mmmm, listen to him. You'd think I was the one who came home with a stripper's phone number in my jacket pocket.

TONY: I didn't even know she put it in there! There were a half-dozen girls running around, we were all drunk —

PAULA: You told me there was only one stripper!

ANNOUNCER: Olive Garden's never-ending pasta bowl. With new mushroom alfredo! Pick any sauce and pasta combination, then another! Just $7.95. Have all you want.

ANGELA: Uh-uh. I'll have another glass of Pinot, but you're driving.

TONY: Woman, you are sucking the will to live right out of me.

ANNOUNCER: At Olive Garden. When you're here, you're family!
Posted by Astronaut Mike Dexter at 8:17 AM